Andretti Autosport’s Takuma Sato won the 101st running of the Indianapolis 500 Sunday, charging from the middle of the grid to the front after a mistake on pit road lost him valuable track position.

Chevrolet’s Helio Castroneves crossed the finish line just 0.2011 of a behind Sato, with rookie Ed Jones rounding out the top three and picking up the slack at Dale Coyne Racing following Sebastien Bourdais’ scary crash in qualifying last week.

The race was red flagged after Jay Howard ran wide on the exit of Turn 1 and hit the outside wall, collecting pole-sitter Scott Dixon as he shot across the track. Dixon’s car landed onto of the barrier on the inside of the track, which ripped the rear end off, before it came to a rest at the entrance of Turn 2. Both drivers were examined at the infield medical center and released.

Sato’s win was a positive outcome in what was otherwise a poor day for Andretti and Honda. Ryan Hunter-Reay and McLaren F1 driver Fernando Alonso’s engines both blew, while Chip Ganassi Racing’s Charlie Kimball also suffered an engine failure. They were just a small grouping of the overall retirements, with a late-race crash sparked by Bourdais sit-in James Davison collecting Oriol Servia, James Hinchcliffe and Josef Newgarden. Conor Daly and Jack Harvey were also knocked out in a two-car accident early on.

Sato’s bid for the win truly began when he got the jump on both Ed Jones and Castroneves following a late-race restart and shot from fourth to second. He then closed the gap to Ganassi’s Max Chilton and took first, with Castroneves also moving around the British driver and putting the pressure on Sato. The two traded positions over the closing laps, but Sato held the lead. 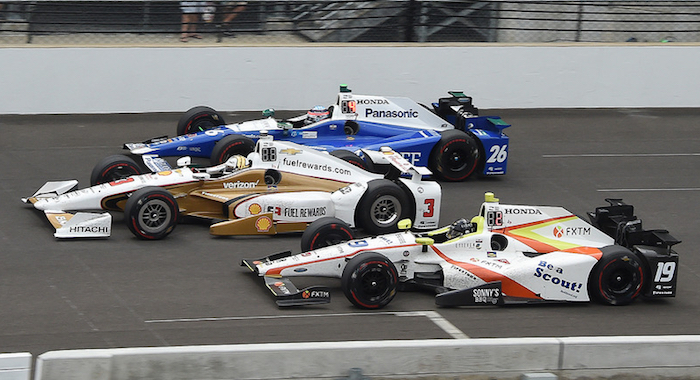 “First of all, I’d like to say big thank you to Michael Andretti and whole team, Andretti Autosport. Without their support, obviously I cannot be here today,” Sato said post-race. “The entire month with my teammates working extremely seamlessly through the practice days, fantastic qualifying, very strong start.”

“At one stage I lost momentum, go down to like P10 place,” he added. “I just get down to my job, believe in the car, and in the pit stops. When the time comes, I have to give 100 percent commitment. I knew I could do it. But just, you know, waiting the moment. The last few laps – they were the moment!”

“I know Helio is always coming on a charge. But he’s just such a gentleman, such a fair player. I believe in him. We go side-by-side Turn 1. It was job done.”

The Verizon IndyCar Series heads to Detroit next weekend for the Belle Isle Grand Prix. Click here for full results from the 101st running of the Indianapolis 500 and here for a full schedule for Detroit.