The No. 4 Corvette C7.R of Tommy Milner and Oliver Gavin took a GTLM class victory at Long Beach Saturday, capitalizing on a last lap mistake by the No. 3 sister car of Jan Magnussen and Antonio Garcia to give Chevy its sixth class win on the California street course.

The No. 3 C7.R was leading the race on the final lap after having overcome an opening lap incident and it appeared as though Garcia was going to take a well deserved win. A wreck at the final chicane caused by a GTD Lexus then bottled up traffic, however, with Garcia becoming stuck behind the three involved vehicles, allowing Milner to sneak by with the No. 67 Ford GT and No. 911 Porsche 911 RSR in tow. Garcia would go on to finish fifth overall, with the No. 25 BMW M6 GTLM splitting him and the Porsche for fourth. 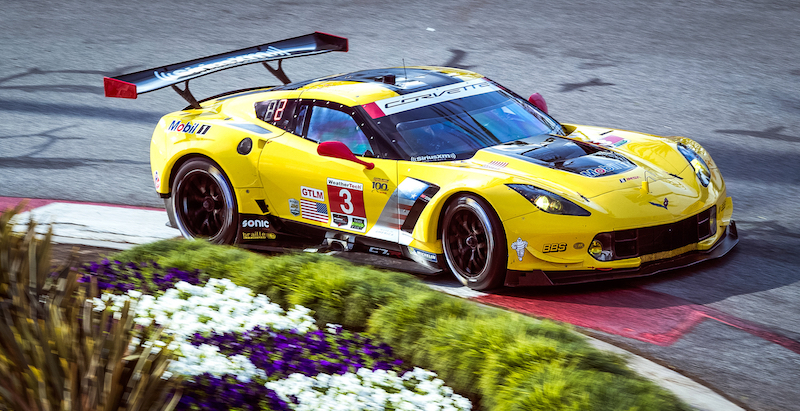 A total of five caution periods marred the race, with the first coming after Risi Competizione Ferrari 488 driver Toni Vilander got into the side of the No. 22 Tequila Patron Nissan Onroaki DPi on the first lap. Magnussen lost track position attempting to avoid that same wreck, which also swallowed up the No. 68 Ford GT of Joey Hand and forced Vilander to retire. The many caution periods helped Magnussen make his way back to the front of the grid, but the final yellow ultimately cost him the victory.

“After a hard-fought battle, it was rewarding to see Tommy Milner roll the No. 4 Corvette C7.R into Victory Lane today at Long Beach,” said Chevrolet motorsports boss, Jim Campbell. “Tommy and Oliver Gavin overcame adversity early in the race to be there at the end to capture the win.

While the outcome of the late local caution was frustrating, it is the never-give-up attitude of everyone at Corvette Racing that continues to result in these exciting races and finishes,” he added. “We had two strong race cars today and look forward to the next race at Circuit of the Americas.”

Click here for full results from the IMSA WeatherTech Sportscar Challenge Bubba Burger Grand Prix from Long Beach. IMSA heads to COTA next in Austin, Texas for the Advance Auto Parts Sportscar Showdown on May 6th, 2017.