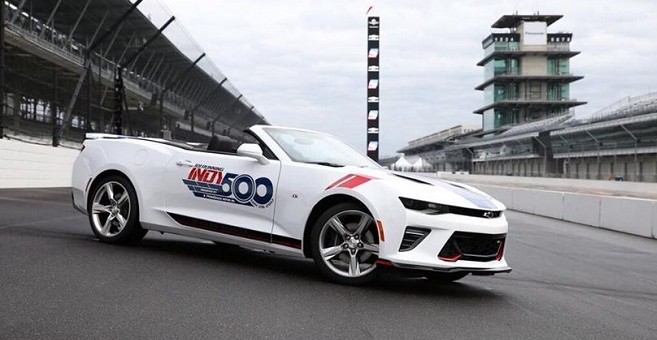 Chevrolet this week debuted its Camaro SS convertible Indy Festival cars, which will be driven around central Indiana over the coming weeks to help raise awareness about the upcoming Indy 500 in May.

Chevy drove 101 festival Camaros out onto the front straight at Indianapolis Motor Speedway to mark the vehicles’ debut. Area Chevrolet dealers will receive 51 of the cars for immediate sale, while the remaining 50 will be used for race promotions.

“Over the coming weeks, the 500 Festival’s board members will log thousands of miles in the Festival cars,” said 500 Festival president Bob Bryant. “From taking part in various community outreach programs throughout the state to transporting the 33 starting drivers of the Indianapolis 500 in the IPL 500 Festival Parade, these vehicles will play a role in our events that draw in excess of half a million people annually. We’re proud of our longstanding partnership with the Indianapolis Motor Speedway and Chevrolet and look forward to using the Festival cars to enhance the community celebration leading up to the 101st Running of the Indianapolis 500.”

The 101st Indianapolis 500 will kick off on Sunday, May 28th. You’ll be able to catch the Camaro SS Festival cars during the race broadcast and if you live in the Indy area, don’t forge to keep your eyes peeled for the cars over the next couple of months.