We’re still unsure as to what the hardcore, track-ready Corvette prototype will be called when it decides to show face, but the media at large has dubbed it the next ZR1. While the jury is out on the name, a new GM patent has spoiled a surprise for the upcoming car.

Patents, first discovered by AutoGuide, detail an active aerodynamic system for the C7 Corvette. Specifically, the patents show a basic layout of what look like the C7 Corvette ZR1 prototype we’ve spied on numerous occasions. The patent was filed on March 23, 2017, and is for “vehicle ride-height determination for control of vehicle aerodynamics.”

The patent spoils various elements involved with the Corvette’s active aero system, which includes an adjustable spoiler, an air dam, a splitter, a diffuser and shutter. These components would all adjust per data fed into the system.

Additionally, the patent goes on to state the system features “a mechanism configured to vary a position of the adjustable aerodynamic-aid element relative to the vehicle body to thereby control a movement of the ambient airflow relative to the vehicle body.” Images also detail a sensor used to detect the ride height of the vehicle and cross check it against a reference frame. A controller can then tell the system to regulate aero based on the sensor’s readings.

It’s a pretty serious system for the Corvette and it shows, whatever track-focused model this turns out to be, the car truly means business. 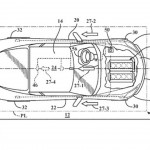 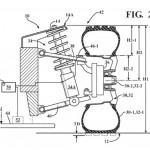 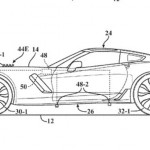 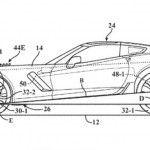 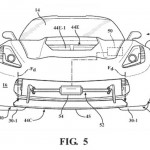