The Verizon IndyCar Series has unveiled its revised car design that is to be introduced for the 2018 racing season.

The new car, which is pictured in the computer-generated image above with the current Dallara chassis imposed overtop, is inspired by the former Indy Racing League/IndyCar chassis that was used between 1996 and 2011. IndyCar aerodynamics director Tino Belli said this was done on purpose, with engineers “working on the aerodynamics to suit the look, rather than the other way around.”

Chevrolet and Honda will continue as the sole engine suppliers for 2018, however it’s so far not clear if chassis supplier Dallara will also continue its partnership with the series. Next year also see the departure of the Chevrolet and Honda-designed aero kits, with a standardized aerodynamics kit being used instead. The new chassis will  rely more on underbody downforce than the current car, which will make for better racing and get rid of the ugly segmented wings and fins that are currently seen on both the Chevy and Honda cars. 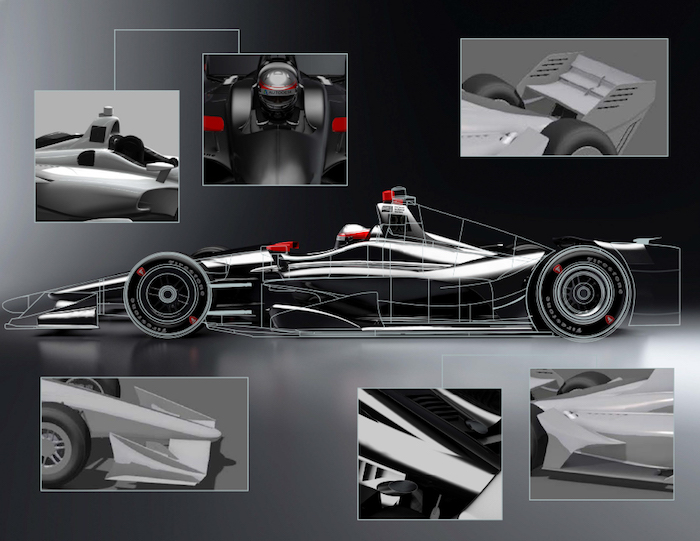 “We’re working on creating more of the downforce from the underwing. The hole in the floor (of the undertray on this year’s car) will be sealed for the road courses and short ovals, but will still be open for the superspeedways,” Belli said, referencing the need for more downforce on road courses and less on super speedways.

The new cars will not only look better and provide better and make for improved racing, but will also be much safer. Belli said IndyCar has so far achieved “97 percent” of its goals with the new chassis and will bring that to 100 percent once it hits the track for testing this summer.