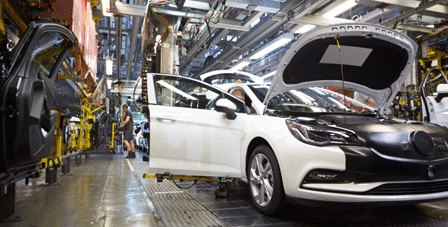 One of two Vauxhall U.K. plants, Ellesmere Port, appears to be safe from closure if GM sells its European unit Opel-Vauxhall to French automaker PSA Group.

The conclusion is somewhat analogous to playing the equivalent of automotive industry chess: the current Astra is scheduled to remain on the market until 2021 calendar year. As such, moving production of the highly-successful vehicle from Ellesmere Port in Merseyside to a PSA factory would not be practical for PSA in the short- to medium-term. Also not an option is to move Astra production to Opel’s Gliwice plant in Poland, which shares production of the Astra five-door with Ellesmere Port, since doing so would require a costly expansion of the former.

However, after the current-generation Astra has run its course, PSA will likely look to realize cost-savings by building its replacement on the same platform as the Peugeot 308 hatchback. It will be at this point that Astra production can theoretically be moved to another European facility from Ellesmere Port.

The future of the two GM-Vauxhall factories in the U.K. has become uncertain as it was revealed last week that the PSA Group, the parent firm of Peugeot, Citroen and DS, was in advanced stages of discussions to purchase GM’s European operations comprised of Opel and Vauxhall. GM operates two factories in the U.K.:

In related news, U.K. Prime Minister Theresa May recently met with PSA Group chief executive Carlos Tavares to discuss the Paris-based automaker’s bid to acquire Opel-Vauxhall. In discussing Vauxhall’s U.K. plants, May and Tavares share a desire to “protect and promote” the jobs associated with the facilities, according to a spokesperson for the U.K. government.