We started our drive out of Los Angeles on a Saturday morning in a rented minivan to the outskirts of Temecula – about a 1.5-hour drive southeast of the city. The sky was cloudy. Or so we thought, as the sun’s rays were weakened by the notorious SoCal smog. As we approached our destination, beyond the reach of the haze, we realized we were in for another beautiful California day.

Plotted outside of a warehouse in an industrial park was a Crystal White 2016 Cadillac ATS-V Coupe that, at first glance, appeared rather normal. With it was James Renick Jr., of the tuning company that shares his surname.

Renick Performance can be described as the proverbial new kids on the block when it comes to tuning, being just over a year old. James and business partner Matt Harber operate out of a 2,800 sq-ft warehouse in beautiful Newport Beach, currently with a few Alpha Platform test vehicles. 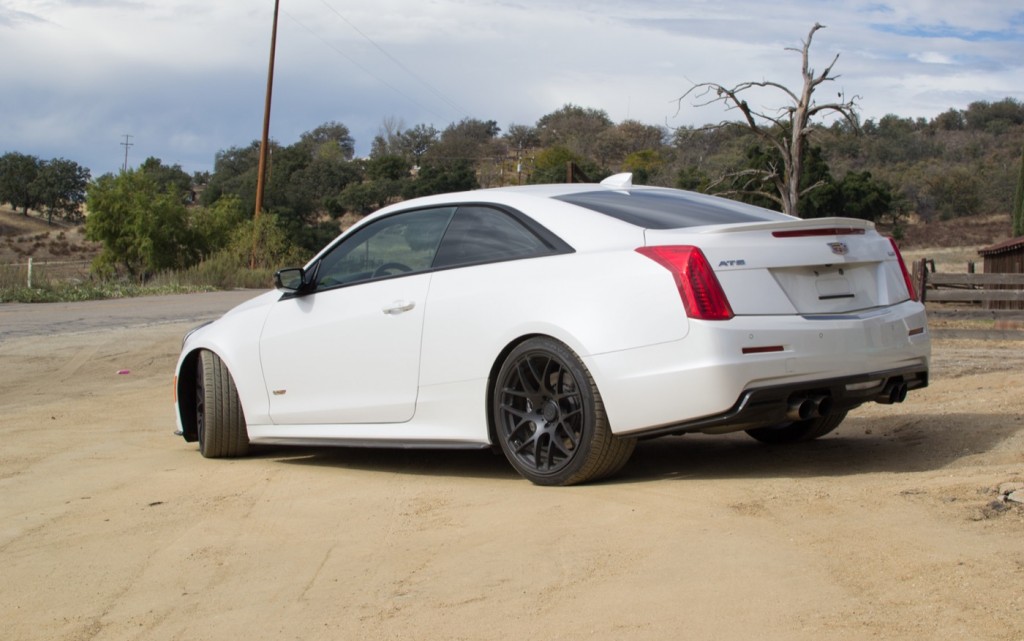 A closer inspection of the Cadillac ATS-V, with a walkthrough by James, revealed a myriad of move-fast mods. Besides an engine tune, this Renick Performance ATS-V featured all-bolt-on modifications, but they were robust enough to make the LF4 3.6L twin-turbo V6 good for 498 horsepower. Largely thanks to cat-less downpipes, and an X-pipe delete setup. Other mods included lowering springs from Swift, in-house wheels wrapped in Toyo ST tires, lower sway bar and a bespoke carbon fiber package. Lastly, a tow hook. Just in case. The brakes were left unchanged. Because according to James, he has yet to find a better cast-iron rotor compound, and the carbon ceramic stuff is just too delicate. The interior was also left untouched. Paired to the fortified LF4 is the 8L90 8-speed automatic transmission.

With an aggressive rasp at the push of the ignition, it was time to drive the RP ATS-V. James took the lead in a 2017 Chevrolet Camaro SS the company’s been working on.

Between the hours of 9:00 AM and noon Pacific Time, the Peninsular Ranges were attacked with engine noise and brake dust. Every nook-and-cranny back road was ours. And it was these winding California roads that helped dial in the feel of the Renick Performance project cars. The spring rate on our tester was calibrated in-house, and does a razor sharp job of dialing out the factory-spec understeer. As the result, mid-speed and low-speed cornering felt more optimized than stock, and perfect for the Xacto-knife roads where one dares not cross the almighty double-yellow line.

The ride still remained rather road-friendly – at least, by California road standards. Not so sure about Michigan, where sufficient suspension travel is needed to overcome potholes. It’s stiffer, but not unbearable. Not track-only, is the bottom line here.

While the 8L90 isn’t the most practical-feeling of gearboxes, it can be great when the entire throttle is used with abandon. Bang-bang shifting gave way to a visceral noises that are rarely found out of a V6. Especially from an American automaker. We’ll go as far as to say that it’s a crime that the ATS-V doesn’t sound this invigorating from the factory. Coupled with the enhanced audio of twin turbo spool, and the child in us became alive and laughing – just like the Saturday mornings of 20 years ago. It felt like a necessary therapy. One that we wish this was a factory option.

Compared to other aftermarket exhaust kits… well… there just aren’t very many. Borla has one. KPE has one, which sounds louder than the Borla based on what we’ve heard. The RP kit we tested leaned on the extreme end of audio, which included the previously mentioned X-pipe delete, downpipe and axle-back exhaust. The RP website doesn’t give a price quote on the axle backs. If you want one, just inquire with them. After several hours assaulting the mountains, we found ourselves at a roadside sandwich stop outside of San Diego, very awake and very alive. After a bite, and witnessing a cyclist cancel her order because she’s a vegan, we realized it was time to get back on the trail. But with the roadways beginning to fill up, we took the highway back. This allowed for us to retract a bit, and take in what sort of project vehicle Renick and his team put together. Instead of trying to fix some of the short-comings of the Cadillac ATS-V, such as the interior, they instead focused on amplifying what was already good, or great, about the car to the point where it was next to impossible to complain about its flaws. When that happens, a sports car becomes endearing. The little things all become dismissible when there’s the sound of a 498 hp engine passionately screaming back at you, out of joy.

We expect more great things out of Renick Performance in the future. And if you have a Cadillac ATS, ATS-V, CTS or CTS-V, or Camaro, be sure to check out their website.