Every once in a while we come across a special car that holds an incalculable amount of historical and sentimental value, which then gets swept up by eager car collectors with a pension for cars that have the utmost significance. On the one hand, the sound investment should yield a return-on-investment, or at the very least avoid depreciation. On the other hand, there’s an irreplaceable sense of nostalgia and achievement when such a vehicle is in your possession.

Such is the case for this Corvette, which is Corvette Racing’s C6.R Chassis No.005, built by Pratt & Miller for the 2007 season. There are just 30 hours of use on its awesome LS7.R V8 engine. In that time, this automotive weapon was wielded by decorated factory drivers Jan Magnussen (who is still with the team), Johnny O’Connell (now with Cadillac Racing) and Ron Fellows (now operating his own racing school).

The car has quite a few achievements under its belt. In 2007, it was the winning car for the Houston and Mosport races of the American Le Mans Series. In 2008, Phoenix Carsport Racing became the new owner and began campaigning the car in Europe. Other pro drivers, like Mike Hezemans and Fabrizio Gollin, got behind the wheel and drove the Corvette to more victories, with a handful of second-place wins and a first-place win at Adria. 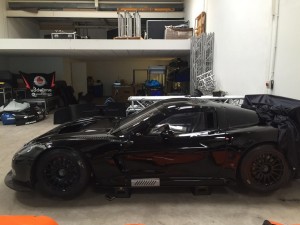 As time went on, the Corvette saw limited competition. From 2010 to 2014 it didn’t achieve any victories, and it’s last appearance was the 24Hrs of Dubai. The car’s current condition is listed as: “as last raced.” It currently has an all black finish, but the listing states that it can be returned to its original color with graphics.