Consistently healthy sales performance has enabled Cadillac to surpass 100,000 vehicles sold in China during the first 11 months of 2016.

Not only do the results represent a 54 percent increase over the same time frame in 2015, but they also set a notable milestone in which Cadillac has sold over 100,000 vehicles in China during a single calendar year — a first for the brand in the Chinese market. What’s more, December sales figures are likely to raise Cadillac’s final 2016 sales figure in China to well over 100,000 units.

“Reaching this milestone reminds us that Cadillac is setting a new standard for aspirational and premium appeal in China,” said Andreas Schaaf, vice president of Cadillac China. “Our new products, our dealers and Cadillac’s global transformation are catalysts for the unprecedented growth we are experiencing.” 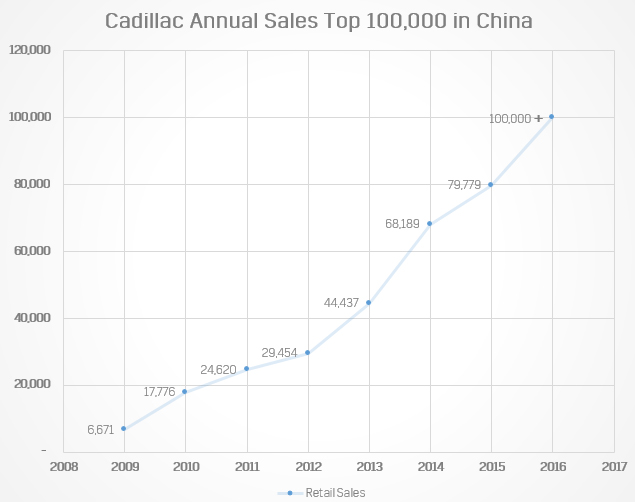 The road to 100,000: Cadillac sales have consistently increased for the last 7 years in China

Cadillac states that it has been recognized by Chinese luxury car buyers for its distinctive image as the “New American Luxury”. The brand is continuing to expand its product portfolio and dealer network, as well as improving customer service in China — the second-largest car in the world.

In 2016, Cadillac has introduced two new models: the CT6 full-size prestige-luxury sedan and XT5 luxury crossover. Both vehicles are produced at Cadillac’s new, state-of-the-art manufacturing facility in Shanghai. In the medium-term future, the brand will introduce three new crossovers — one above the new XT5 and two below it.