And so the global internet debuts begin. We previously brought you the 2018 Holden Commodore hours ago, but it’s Vauxhall’s turn. Meet the 2018 Vauxhall Insignia Grand Sport.

The 2018 Insignia Grand Sport aims to redefine what the midsize sedan segment is capable of with a more common-man badge. The Insignia Grand Sport starts with a slippery, sleek new design. Based on the E2XX platform, the Insignia Grand Sport has stretched out and revealed chiseled lines, including a dramatic sweep from the side skirt through the rear door. Despite elongating itself, the Insignia manages to shorten its rear and front overhangs. Through the design and engineering, Opel and Vauxhall were also able to shed 386 pounds from the car altogether through careful material selection.

The five-door liftback design wears decidedly coupe-like looks, and it’s quite easy on the eyes. It certainly doesn’t look dated and should be a striking vehicle to see on the streets themselves.

“In its proportions as well as in each detail, we wanted the new Insignia Grand Sport to deliver an upscale quality feel,” said Brit Mark Adams, Vauxhall/Opel Vice President Design Europe. “Its design combines flowing lines and subtle surfaces with crisp, precise lines to exaggerate its dramatic proportions: it looks longer, lower and wider than it actually is, and it definitely looks upscale. Every design feature conveys technical know-how and the utmost precision. The new Insignia Grand Sport is an excellent value proposition with the aura of a car from the premium, upper class.” 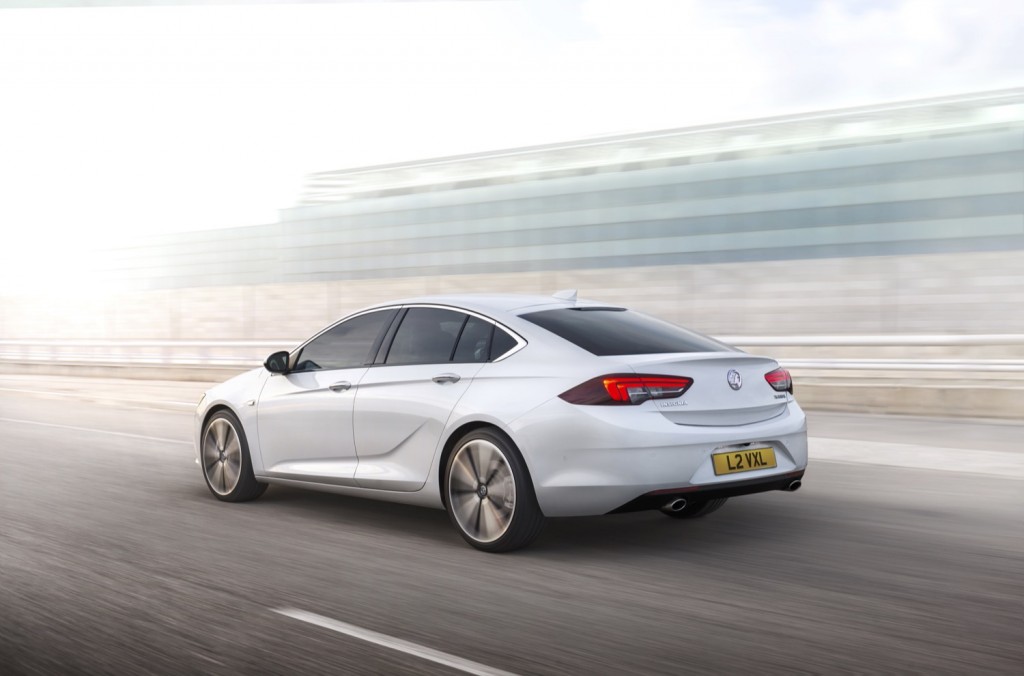 Quite interestingly, Vauxhall describes an eight-speed automatic gearbox, while Holden touts GM’s nine-speed unit for the 2018 Commodore. We’re not sure if something has been lost in translation, or the nine-speed automatic will be reserved for various markets.

However, both the 2018 Insignia and 2018 Commodore share the same intelligent FlexRide chassis and all-wheel drive system.

Furthermore, the 2018 Insignia Grand Sport features “Aktion Gesunder Rücken” (Campaign for Healthy Backs) premium ergonomic seats. Not only are the seats heated and ventilated, but they are massaging and offer unique bolster settings.

And, it wouldn’t be a new GM vehicle without OnStar. Vauxhall states a new concierge service will be launched together with the Insignia Grand Sport, enabling its occupants to ask OnStar advisors to select a hotel and proceed to room reservation.

The 2018 Vauxhall Insignia and Opel Insignia Grand Sport will be revealed at the 2017 Geneva Motor Show this coming March. As for the 2018 Buick Regal, this is it, save for a few minor details. And we think this Opel-Vauxhall-Holden will make a mighty fine Buick, too.