Finally! A Chevrolet Cruze Hatchback! For the US market! An American hatchback for us Americans. Ford was already offering one, but never mind that, because it’s old news. This is the first modern C-segment Chevrolet hatchback this side of the Atlantic for a while, sans the Volt. Which can run too expensive for those who just want to be practical. And the Chevrolet Sonic can either be too chintzy or too small for others. The 2017 Cruze RS Hatchback offers a Goldilocks approach to that spectrum. One that offers a strong combination of efficiency, practicality, and general affordability.

The Cruze Hatchback is launching in LT flavor as the baseline, giving it a starting MSRP of $22,190 with destination. With that comes a six-speed manual transmission, a new 1.4L turbocharged engine with 153 hp and 177 lb-ft of torque, six-way adjustable driver’s seat, 7-inch MyLink touchscreen with Android Auto and Apple CarPlay, Teen Driver, 10 airbags, 205/55R16 all-season tires, and 31 EPA-estimated combined MPG. The RS appearance package is a complimentary option. 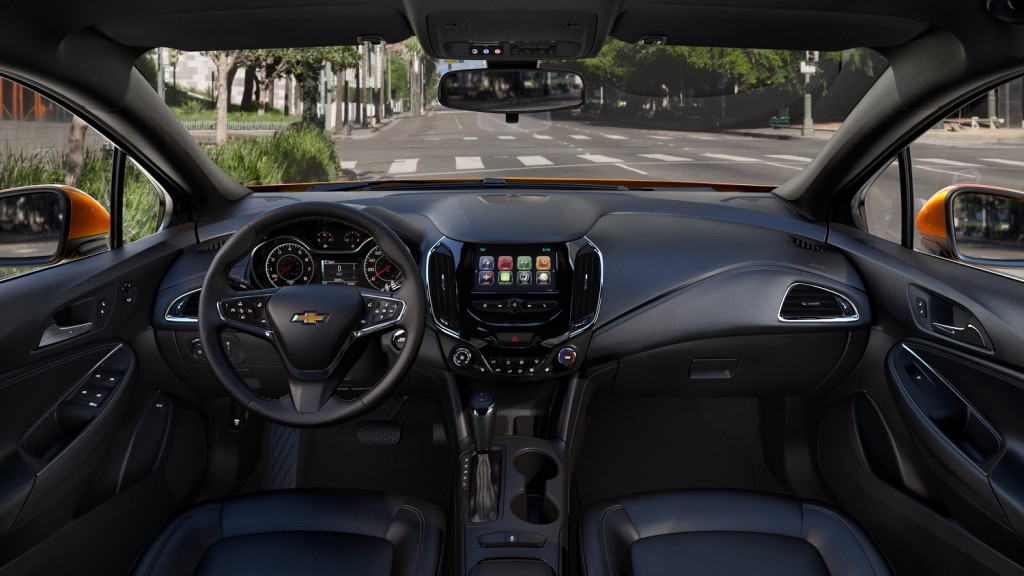 The interior is all it needs to be. Though, we would never willingly choose the rental car gray color palette our tester featured for ourselves. The six-speed manual transmission, however, is a welcome oddity and a change of pace from the automatic transmission death march, pulling the industry along with it. But the longer throws and pedal feel makes things feel a little loose, and 1-2 gear shifts with the six-speed manual can be uncooperative and we’ve even experienced grinding. Yes, yes, the clutch was in all the way, in case you had a shred of doubt that this was somehow my first day driving a stick. It just doesn’t want to shift quickly as a Camaro or Corvette.

Unlike the automatic transmissions we’ve experienced in the new Chevy Cruze, the manual transmission model seemed to behave differently with the engine. We’re talking about the sensation of experiencing old-fashioned, turbo-laggin’ boosty-boost. Not much until north of 3,000 RPM and then a whoosh of EcoTec power scoots the Cruze Hatchback forward. This sequence is probably the most entraining part of driving the inconspicuous five-door. The manual gearbox also means no start-stop tech. And the engine’s hushed NVH levels are also huge improvements from the previous generation Cruze and outgoing 1.4L EcoTec engine, which can still be found in models like the Sonic and Trax. To put it another way, the quiet ride helps keep the Cruze Hatchback from feeling like a penalty box, even in base, non-Premier form. 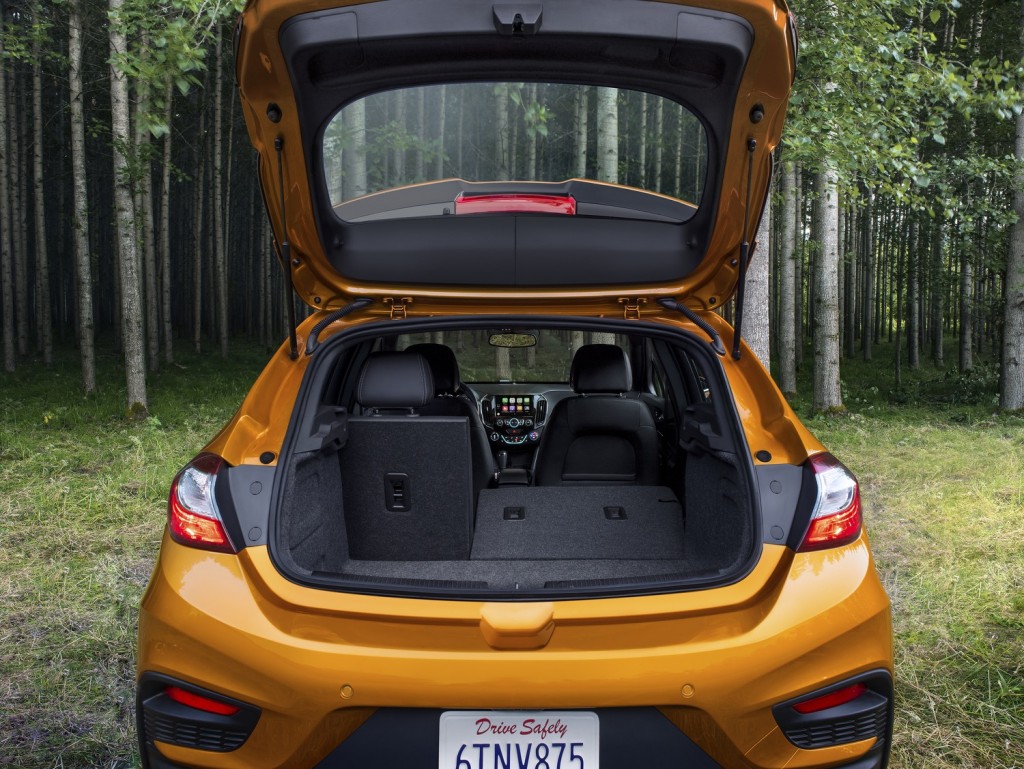 The ride was supple, if not a bit numb with its steering, combined with an overarching theme of comfortability over sportiness to it all. Much like the Cruze sedan. Repeat, it’s no penalty box, especially if you’re just looking for a utilitarian hatchback to fit one’s (likely urban) lifestyle. But this is not the hot hatch you’ve been praying for, folks. Nevertheless, it is practical, and boasts superior cargo space than its cross-town rival, the (aging) Ford Focus hatchback (47.2 cu-ft to 43.9 cu-ft with the second row folded, respectfully), which makes up roughly 40-percent of the Focus’ overall sales volume. The Cruze Hatchback is also superior in cargo space with the second row folded up than the Ford (and Mazda 3 hatchback), at 23 cubic-feet. While that’s a class-leading number, the rear headroom is compromised for the sake of a tapered roofline. At which point drivers will have to explain to their rear seat occupants that their heads are touching the ceiling in the name of aerodynamics and fuel efficiency to save dear Mother Earth. It was one thing to have to rationalize the lack of headroom in my eco-conscious Chevrolet Volt… but not having to do the same in the Cruze hatch.

The overall opening of the backside was good enough to swallow an Ikea table and then some, though in relation to the entire size of the rear fascia, I figured it would be a little bigger, yielding a disproportionately large rear bumper. Closing the hatch also took some getting used to, with the grip integrated between the edge of the hatch and rear window. It required some type of awkward flicking extension of the hand and arm to properly close the thing. Maybe there’s a special technique to be found in the instruction manual. Who knows. I always found it easier just to get my fingers dirty and drop the hatch the old fashioned way.

With all things considered, I can’t close without addressing the German elephant in the room. The Volkswagen Golf. The more powerful, more affordable, and more spacious Volkswagen Golf. Reactionaries may point out that Volkswagen is currently a troubled brand, that the Golf is built in Puebla, Mexico, has less base model content, and is less economical than the American Chevy. All of those things are true. Yet, the Cruze Hatchback is built in Ramos Arizpe, Mexico (not Lordstown, Ohio – that plant remains solely for the Cruze Sedan), and the Golf continues to be locked in as an iconic hatchback champion. These things are also true. Does it matter? Depends on who you ask. For most, Chevrolet holds more clout in the mass appeal department. These consumers of mass appeal want themselves an efficient, comfortable hatchback. Chevrolet is delivering exactly that.