The politicization of the SUV has caused the market segment to nearly evaporate not even a decade ago. For a limited time, a fad existed where it simply was not socially acceptable to have one, while $5-per-gallon gas prices scared even the most resilient of buyers away into something smaller. Holding strong in this segment has been General Motors, with its SUV and truck products continuing to be a trusty barometer on the overall health of the company. Somehow, despite the passing of SUV-shaming, extreme gas prices and even GM bankruptcy, the GMC brand remains alive and well. And the iconic SUV brand continues to be carried by its largest and most opulent of vehicle offerings. We’re talking, of course, about the Yukon Denali.

There are more elegant, modern takes on the SUV these days that can make the Yukon Denali appear dinosaurian. Yet it’s far from the levels of ancient and cumbersome as, say, the coveted Mercedes G-Class or Toyota Land Cruiser. Somewhere in between the G-Class/Land Cruiser realm and, say, the Range Rover (on the other end) resides the GM luxury SUV family. Their body-on-frame design is becoming an increasing rarity within the industry, and they remain some of the biggest SUVs on the market. The benefits, of course, consist of a see-me-coming road presence, and enough room on the inside for it to be a business-class transport of choice, or a high-end family hauler. And that’s without mentioning the myriad of cup holders, the five USB ports, the 110-volt outlet, the rear seat entertainment screens, the OnStar 4G LTE wifi or the Apple CarPlay/Android Auto. Oh, and it tows over 8,000 lbs. There’s little left to be desired, in this case.

To the surprise of nobody, the interior is luxuriously spacious, and the front seats make me wonder if this is what a 787 pilot feels like, plopped firmly in the command of a massive human transport. The thrust of the 6.2L L86 V8 mimics a takeoff, with 420 hp and 450 lb-ft of torque accelerating the Yukon Denali down the tarmac. We like the OHV V8 setup in the big Yukon Denali because it’s throaty, relatively light, and boasts a castle well’s worth of twisting force. There should be no other way to power this monolithic structure of an automobile. Aside perhaps, to strap a supercharger on top of the cylinder heads. GM, the world is waiting for it. Though, if and when that does happen, here’s to hoping for better brakes. The soft brake feel and the overall stopping distance, as it is, leaves room for improvement. Though, the 2016 Yukon Denali is a 5,300-lb+ SUV, and sometimes there’s no getting around weight. 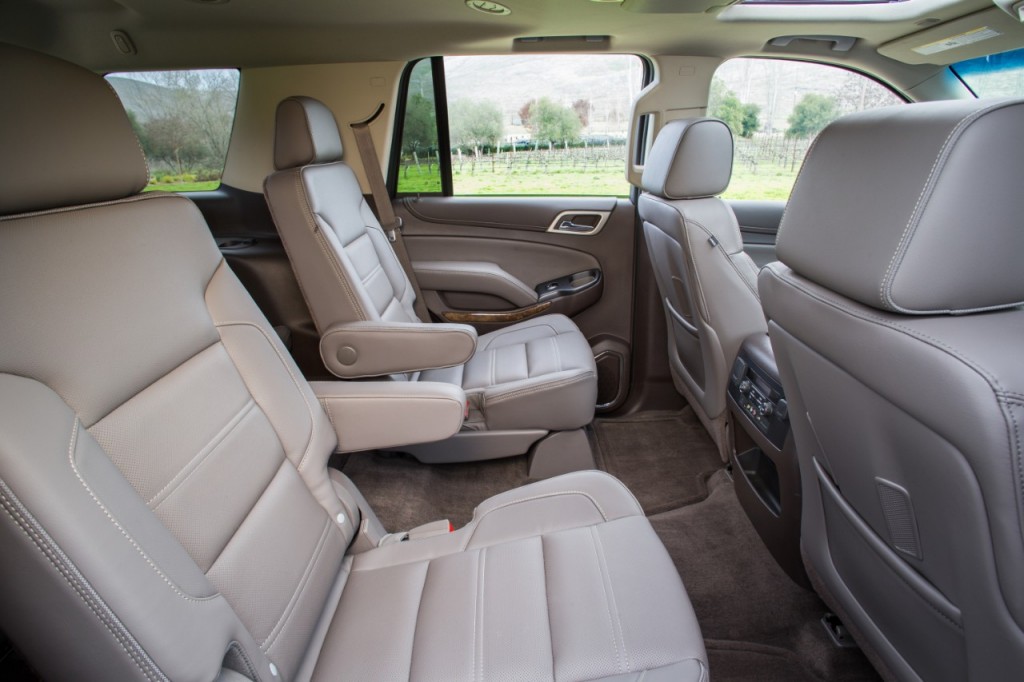 Conversely, the GM 8-speed can have its bothersome moments. The 8-speed is best when totally on it, pedal to the floor. Otherwise, the 8L90 feels like it shifts too early, is a gear too high, or downshifts to abruptly. It otherwise disturbs the hovercraft ride (save for the nastiest of Michigan roads), which comes from the magnetic dampers, which are standard on the Yukon Denali. And while the Bridgestone Dueler tires emit a tad of road noise, the cabin is soundproofed enough to where it’s not much of a bother.

There is one glaring bother, though. A certain endemic GM SUV buffeting at moderate speeds that has yet to be officially addressed or fixed, as far as we know. This is an SUV that floats around the $80,000 range, depending on the options. This shouldn’t be happening, and we know for a fact we’re not the only outlet to experience this phenomenon, let alone customers.

Despite the truck-like proportions, the Yukon Denali sports a turning radius of just 19.5 feet. That’s actually a shorter radius than that of the so-called “more livable,” not-so-midsize pickup, the GMC Canyon (20.65 feet). That turning radius is actually passenger car territory, and is less than half an inch within the likes of the Chevrolet Impala and Cadillac XTS. Hell, it’s .15 inches off the turning radius of the recently downsized 2017 GMC Acadia. To say that Yukon is more maneuverable than it looks is an understatement. Like an NFL lineman. The commercial writes itself.

There always has been a personal flair when it comes to the short wheelbase GM SUV models like the Chevy Tahoe and GMC Yukon. And the consumer market data backs it up, with a large chunk of buyers using them for more personal use. This is opposed to the Chevy Suburban and GMC Yukon XL being used as the modern version of the Griswold Family Truckster, and normally see a higher occupancy rate. That said, there is little to no better option when it comes to a night out on the town with the homies. Or a pair of couples. The amount of room the (second-row) passengers enjoy, coupled with the commanding road presence that the driver indulges in all makes for the perfect arrival vehicle that is always set to make an impression. And if you’re one to keep up with the Joneses (or ahead of them), this is a significant selling point.

Is the Yukon Denali perfect? Few vehicles are. Yet there’s a certain excellence to be found when it comes to its overall performance of intended function. One that is addicting, admittedly. Even as a PHEV driver, the appeal of a body-on-frame, V8-powered luxury SUV is not lost on me. An elite command of the road and a fully erect ego boost means that the Yukon Denali is a very specific drug that will always have its place in the world. Best of all, it can be enjoyed with friends.