Chevrolet wanted to ensure everyone understood the 2017 Colorado ZR2 is a very capable truck. How did it ensure this? By erecting an off-road playground in the middle of Los Angeles for the ZR2 to be put to the test and show off its capabilities.

Yours truly along with our own Manoli Katakis hopped into a 2017 Chevrolet Colorado ZR2 with the 3.6-liter LGZ V6 engine, along with our pilot, Todd Hubbard, for a demo of the ZR2’s performance. Needless to say, we walked away pretty impressed.

We already detailed our thoughts on the Colorado ZR2 and the 2.8-liter turbo diesel four-cylinder engine, but the V6 will likely find its way into the hands of more buyers, simply because of the lower price tag, which hasn’t been announced at this time.

From the passenger seats, we found the V6 to be plenty punchy with 308 hp and 275 lb-ft of torque, evident when Hubbard punches the accelerator at one point in the video. No, it won’t stack up to the Raptor, but the Raptor accomplishes a different kind of off-road experience.

For those looking for a well-behaved rock crawler with a “just right” amount of power, the Colorado ZR2 delivered in spades as we hopped over the man-made dunes and jumped a railroad crossing. Hubbard explained GM wouldn’t allow engineers to make a true “ramp”, but they could get away with making a set of railroad tracks that just so happened to have all the qualities of a ramp.

After moving through the 60-percent hill grade, which the ZR2 accomplished with ease, we weaved through the “Raptor pinch”, an area just big enough for the ZR2, where the Raptor would get squeezed out. Chevy liked the subtle jab at Ford. Finally, mostly for show, Hubbard placed us just right to take photos like you see below on the uneasy incline. We enjoyed rocking the Colorado ZR2 around, which took it like a champ. 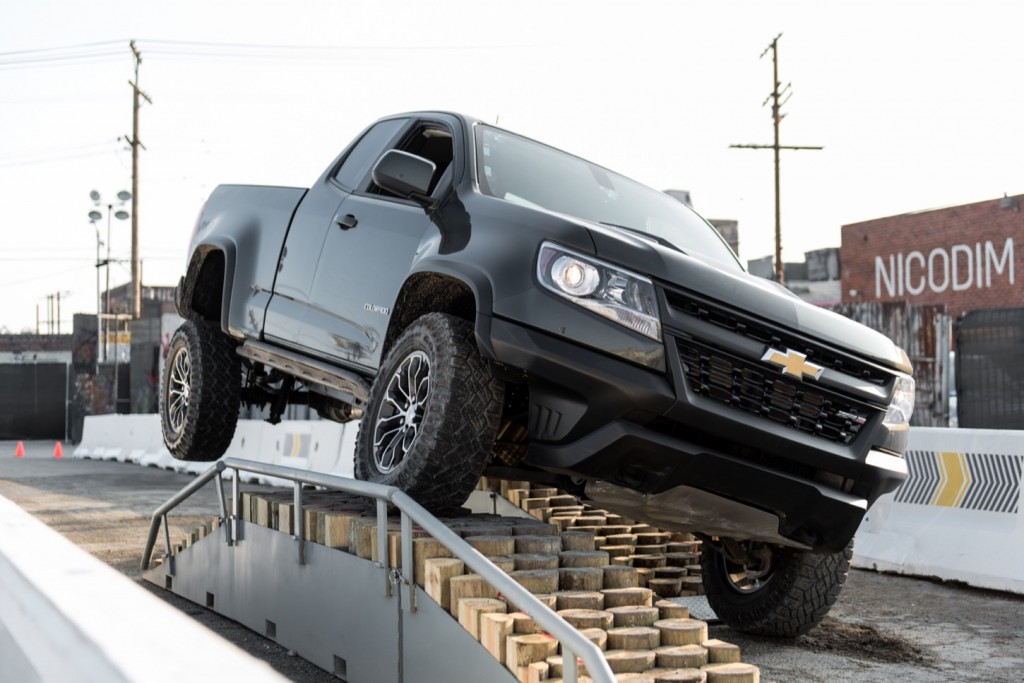 If anything, the basic ride along in the ZR2 only whet our palettes for what’s to come. We simply can’t wait to get behind the wheel of a 2017 Chevrolet Colorado ZR2 ourselves. If you’re craving more ZR2 information, be sure to check out our interview with Hubbard, a former Hummer engineer, right here.