The 2017 Chevrolet Camaro AutoX Concept that was unveiled this week during the 2016 SEMA show certainly pushed the grounds of what a four cylinder Camaro could be. A “momentum car,” if anybody would have ever dreamed to consider a Camaro such a thing. Yet in reality, that’s exactly what the 2017 Camaro 2.0T is. With just an LTG turbo inline four-pot nestled in the engine bay, the small engine helps to keep the overall weight relatively low, while at the same time providing superior distribution and balance. In short, there’s a lot of potential in the Camaro turbo, and Chevrolet aims to deliver on that potential with a new slew of genuine performance parts. And we were fortunate enough to test them.

The 2017 Camaro 2.0T by itself is already an athlete in its own right, but doesn’t posses the track-attack goodies of the Camaro SS, such as magnetic ride control, Performance Traction Management (PTM), or more aggressive tires and brakes. Driving a base model around Spring Mountain Motorsports Park helped galvanize this notion. It’s good – but with a few tweaks, it could be great.

With Chevrolet’s new performance accessories for the Camaro Turbo, we have ourselves some blending between the standard model, and the cone-carving Camaro AutoX Concept. We’d almost say that the upgrades yield something like a 2017 Camaro 1LE Turbo.

In the modified Camaro 2.0T we sampled, it featured no less than nine performance accessory options, some of which are still in the concept phase, such as the suspension handling kit and the short-throw shifter. Ready out of the box were essential bits like the 2.0T performance exhaust ($1,595), the hard-stopping Brembo 6-piston front brake kit ($3,000), suspension lowering kit ($1,500), wicker bill spoiler kit ($395), a red LTG engine cover ($350 – not sure how this was categorized as a “performance upgrade”), and Recaro driver and passenger seats – which are said to be available by Q1 of 2017 with pricing to still be determined. All in all, there’s nearly $7,000 in confirmed upgrades in this Camaro 2.0T, sans pricing on the suspension handling kit, short throw shifter and Recaros. In actuality, there’s probably closer to 10-grand in performance upgrades.

Also present is a myriad of personalization accessories, such as smoked tail lamps (pictured below), a blackened fuel door, blackened bowtie decals, and on and on, totaling $5,135 in aesthetic upgrades. The cost of all of this kit makes us wonder if anybody will actually spend this much on a base-level Camaro, or if they would rather upgrade themselves to a V6 or even a V8 model.

Another way of looking at it would be a selecting a well-seasoned flank steak vs upgrading to an untouched ribeye. I know which one I would choose. Yet, this drive event seemed more of a demonstration of what Chevrolet offers or plans to offer for the Camaro 2.0T, rather than simulating a realistic order sheet. 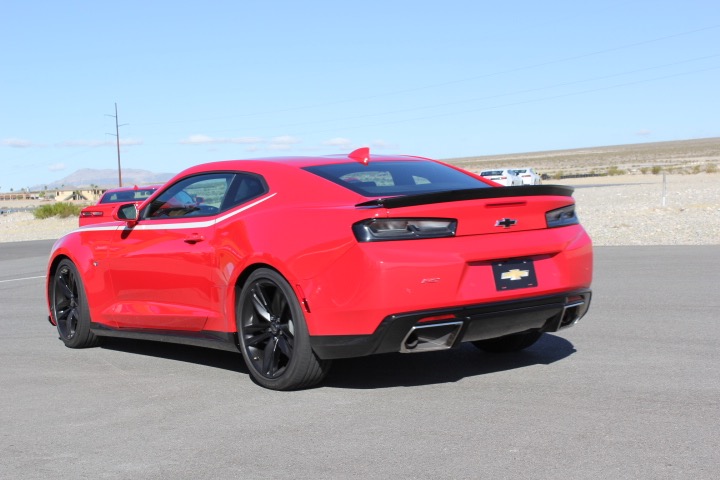 With a HANS device clipped around my torso a standard-issue open-faced helmet protecting my skull, I saddled into the standard Camaro 2.0T, with a manual transmission and no accessories whatsoever. Even though we’ve driven one before, it continues to impress with its acceleration abilities, reaching speeds of nearly 100 miles-per-hour on the home straightaway before the braking zone of turn 1. It’s also rather poised and balanced even before adding upgrades, remaining predictable through all sections of the track, including a high-speed slalom set up on the straightaway just before the esses. Repeat three times before pitting back into the grid, and I was well calibrated for the next vehicle – a Camaro 2.0T with the accessory upgrades outlined above.

The exhaust kit emits an eager burble and a more aggressive WOT growl through the rev limiter. It should be standard. The six-piston front brake kit chomps down hard enough to where I thought for a moment I was piloting a 455-hp Camaro SS. They should be standard. Keeping up with the improvements was the suspension handling kit that allowed for sharper moves at higher speeds. The bar was indeed raised.

The eye-opening section of the track that revealed all of the improvements at once was through turns 1-2-3 and 4. For turn 1, it was possible to hit the brakes a whole number marker deeper than before at the end of the straightaway, keeping a nice apex on the right, and then powering out to the left. The following section normally required brief off-throttle inputs to get the Camaro balanced and pointed in the right direction for turn 2. But if done right with the accessorized Camaro 2.0T, one could keep the power down all the way through from powering out of turn 1, tracking left, into the dip before turn 2, aim to the right, keep on the gas through turn 2, and then power all the way uphill through turn 3 and hitting the rev limiter just before some heavy braking entering the downhill decreasing radius section of turn 4. In truth, that entire portion is my personal favorite of the East course at Spring Mountain, mostly because the car seemed to like it as much as I did.

Several laps around the track between the base model and one with performance accessories was nearly a night/day difference – still highly noticeable improvements while maintaining similar dynamic tendencies.

Overall, offering performance accessories to the base Camaro is a step entirely in the right direction. Constructively, we still yearn for some active rev-match action, a more taught steering feel a la the Camaro SS, and some grippier tires to go with it all. We figure that the performance accessories team have evaluated such suggestions also, and as such we hope that they have come to similar conclusions. Maybe a hypothetical Camaro 1LE 2.0T, so to speak, would satisfy these urges. Until then, the full-warranty-backed, growing portfolio of performance accessories is as good as it will currently get. And it’s pretty damn good. 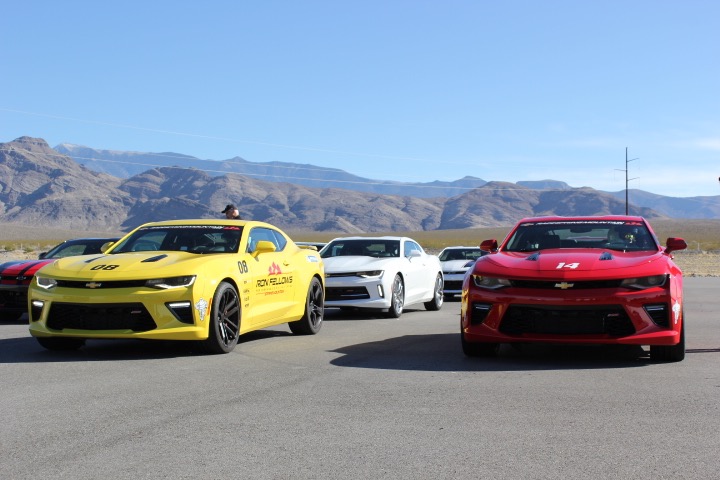