After multiple concept cars from Cadillac that absolutely blew my mind with such style, elegance and presence, it became hard for me to accept the 2016 CT6. That’s it?, I once pondered to myself on a 2015 New York Auto Show floor, eyeing its lines with a cocked eyebrow. I felt more than a little cheated – knowing and seeing full well that Cadillac designers have the talent to absolutely out-class just about everybody in the luxury game when they’re unleashed. And nobody was shy of giving these fully-portioned vehicles a proper name. Ciel, Elmiraj… Escala. Swoon. Developing this pre-annotated notion about what the CT6 would be like to drive was not painting a pretty picture for myself. It was the embodiment of overhype. It was going to take some work to melt this ice.

The CT6, being a machine, didn’t know how I felt about it, but it didn’t fail to greet me on approach, illuminating its sleek LEDs integrated in the doorhandles, and even unlocking itself for me without so much as laying a finger on the softly-textured, keyless fob. Hello, back, I suppose, as I opened the driver’s door and had a seat and oh my word this is nice leather. Ah, okay, CT6. I’ll give you a chance.

Just about everything inside the cabin of the 2016 Cadillac CT6 felt indulgent. The steering wheel felt like the best from Cadillac yet, and the seemingly infinitely adjustable seats set the car up to be a great touring car. The 34-speaker Bose Panaray sound system was also a giant leap for Cadillac, as was the new, less radical CUE infotainment system. Because buttons and knobs are always going to be the ergonomic answer for cars.

The Bose Panaray system, while easily the best audio system ever found in a Cadillac product, still isn’t the Bermester from the Mercedes, or the Bang and Olufsen from the Audi – they just seem to have more range. And where some areas were plastic in the cabin of the CT6, they would have been singular pieces of brushed metal in a Mercedes – like the seat adjusters, for example. And nobody is getting much engine for the money with a 2.0L four pot as the starting point. Then again, a Cadillac CT6 starts at $53,495 ($66,310 as tested). A base S-Class is nearly double that. A base 7 Series is over $81,000, and the base A8 is over $82,000. With that in mind, the CT6 is still worth more than just a look, despite the little qualms here and there. While it starts around the price of some cars a full size below it, it simply doesn’t feel that way. It’s strikes as an overly modest pricing strategy that’s perhaps a result of being snake-bitten by the blowback reaction to the prices of the current CTS, which’s isn’t even $10,000 less than the CT6, and far greater than the previous generation model. In size and in content, the CT6 just doesn’t feel like another “tweener” car, despite what the price suggests. Looking at it from the perspective of how much it weighs, though, might be the biggest tell that the greatest parts about the CT6 is what people won’t see. 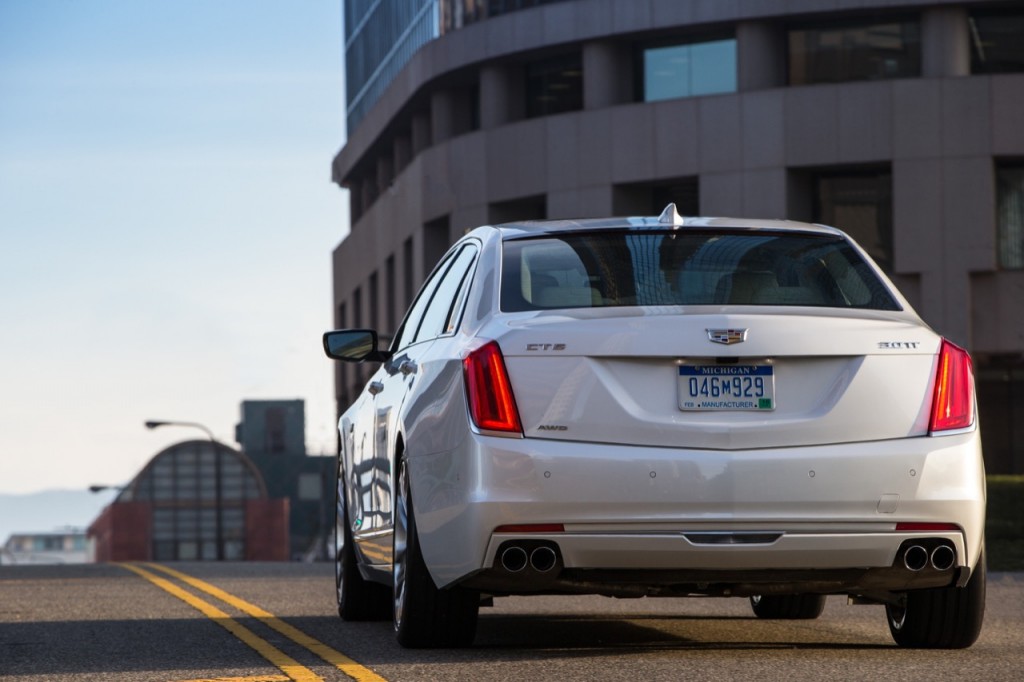 With a base curb weight of 3,647 lbs, the Cadillac CT6 2.0T is lighter than the lightest vehicle in the segment below it – which is the Cadillac CTS. Luxury vehicle buyers tend not to care about things such as weight in the grand scheme of things (their loss), but the structure of the CT6 is grade-A engineering porn, thanks to the latest in manufacturing techniques, such as GM’s proprietary aluminum spot welding process. All of this weight savings, and the 50/50 weight distribution of the 2.0T-powered CT6 Luxury RWD model I was testing, makes for an unprecedented driving experience compared to the orca whales that make up the rest of the class. If The Transporter drove a Cadillac, it would be this one. Abundant room in the back seat and a tomb-quiet interior makes the back a great chauffeur’s car. A chauffeur that has an SCCA competition license, that is. The base CT6 is also the only model with a RWD configuration. The 3.6L V6 and 404-hp 3.0L twin-turbo V6 model come in AWD flavors only. With the 264 hp, 284 lb-ft 2.0T LTG engine, the 2016 CT6 is EPA-rated at 22 mpg city, and 30 mpg highway for a 25 mpg combined rating that requires premium fuel. The only blemishes when it comes to driving the CT6 is the square-peg-versus-round-hole 8-speed automatic – this is a segment where smoothness is a necessity and the 8L-series of transmissions are only at their best when being thrashed, and could use some refinement in traffic. The second blemish is that the start/stop system doesn’t play too nicely with the 2.0T engine. Thankfully, it’s entirely defeatable.

In leu of it all, Cadillac has finally given the world a modern take on a big, rear-wheel-drive luxury car. Whether it likes to be admitted or not, this will be the metric that the brand will always be measured on. Don’t think that people want big, opulent vehicles from Cadillac? Look at the Escalade. Look at its most iconic vehicles in its 110+ year history. Cadillac is big cars. Cadillac is opulent cars. Everything else is mere garnishing. So when it comes to Cadillac, the world expects full-size vehicles like the CT6 to be a core competency of the brand. Happily, the CT6 is a major step in the right direction. Yet it still teases the imagination of where Cadillac will go from here with full-size luxury vehicles, as do the amazing concept cars. The 2016 Cadillac CT6 2.0T is a great appetizer, but we’re anxiously awaiting the main course.