General Motors has filed a second application to register LTX as a trademark with the United States Patent and Trademark Office (USPTO), GM Authority has discovered.

The automaker’s September 19th, 2016 application is assigned serial number 87175690 and specifies that the mark will be used to name “Engines for automobiles, sport utility vehicles, trucks and vans.”

This is the second time time that General Motors has applied for the LTX trademark, with the first time being on April 2nd, 2013. 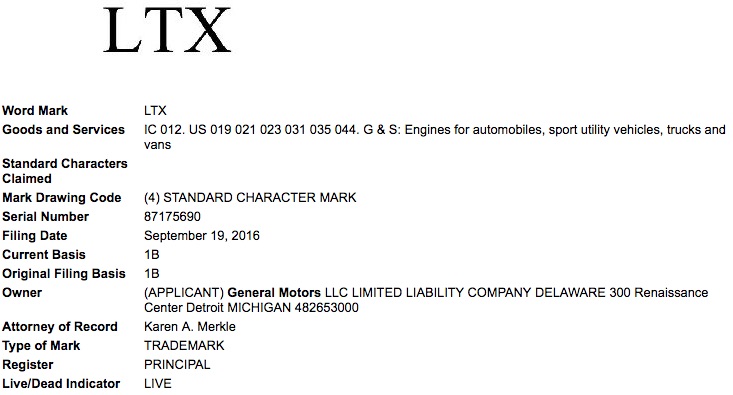 The scenario for this LTX re-filing is the same as with the LT5 filing, both of which were filed concurrently.

We believe that the reason for GM’s second filing for the LTX mark is directly associated with the automaker’s desire to secure rights to the mark, but then running out of time to do so via the original 2013 application.

It’s worth noting that, to successfully register a trademark, an applicant bears the burden to prove to the USPTO that the name for which it is filing (in this case — LTX) is a real-world product or service. This is performed via a document called Statement of Use, a vital element of the trademark application process that the applicant has up to three years to provide to the office.

The only question now is what GM is reserving LTX for, in the presence of LT5.

Stay tuned to GM Authority for LTX news as well as for continuous GM news coverage.