If you speak to anyone that has something bad to say about the Buick Avista concept, it’s minor. Overall, and for the most part, the Avista concept is a gorgeous looking, twin-turbo V6 powered coupe we want in our lives. And the forces of the Concours d’Elegance of America in Plymouth, Michigan have spoken.

The Buick Avista concept was named “Concept Car of the Year”, and named “Most Significant Concept of 2016.”

The awards underscore the importance of automotive design, engineering and market responsiveness.

“The design process of the Avista brought the team together to unite around a future direction for the brand and the great teamwork and enthusiasm it generated,” said Bryan Nesbitt, executive director, Buick Global Design. “While looking to the future, we also wanted to honor the rich heritage of Buick by integrating timeless design cues in this beautifully progressive concept vehicle.” 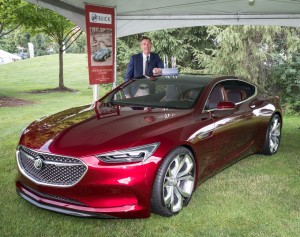 These aren’t the only awards for the stunning Avista concept either. The Buick Avista received the EyesOn Design Excellence award at the 2016 North American International Auto Show, where the vehicle debuted. The concept was also named “Best Future Concept” by The Detroit News readers.

Maybe will a shelf full of awards, Buick will think twice about filling the niche market for a rear-wheel drive, luxury coupe. We won’t hold our breath, but we can dream.