Over 4 million units of the first-generation Chevrolet Cruze were sold around the world since its launch seven years ago, making it the best-selling Chevrolet model globally, as well as in China. And now, China is joining North and South America in getting the all-new, second-generation 2016 Chevy Cruze. Chevrolet’s announcement of the model for the Chinese market comes just a day after GM Authority predicted that the all-new Cruze already on sale in the Americas will soon launch in China as the Cruze XL. Despite us being spot on about the launch prediction, we should note that the vehicle will simply be called Cruze without the XL moniker.

Riding on GM’s all-new, global D2 platform, the all-new Cruze builds on the strengths of the popular first-generation model, featuring a sporty and elegant exterior, a roomy cabin, a choice of fuel-efficient engines with stop/start technology, a sporty driving experience, enhanced safety and class-leading technology.

“Underpinned by GM’s most advanced global midsize car platform, the all-new Cruze is designed for the new generation of car buyers who are looking for the ultimate driving experience,” said SAIC-GM President Wang Yongqing.

Before anyone gets too confused, “midsize” in China means “compact” in North America.

The 2016 Cruze features an expressive exterior design that Chevy says is “derived from a balance struck between the designers’ inspiration and the efficiency-optimizing input of wind tunnel testing”. The result is one of the more slippery cars in the class, with a 0.28 drag coefficient that contributes directly to improvements in fuel economy. 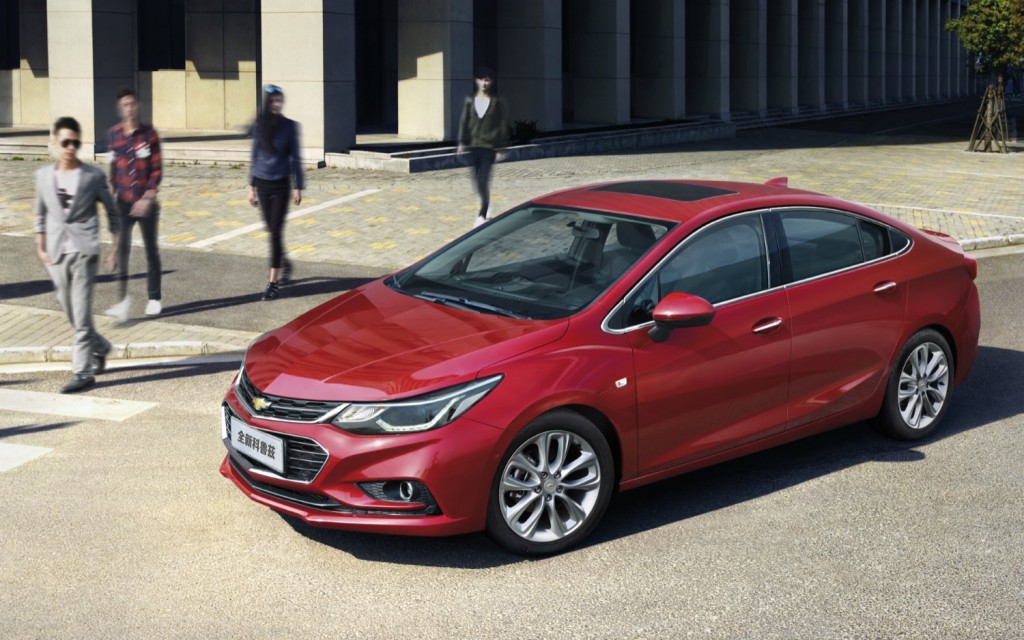 The interior of the all-new Cruze incorporates Chevrolet’s signature dual-cockpit design with contemporary two-tone sporty leather trim. There is also more room thanks to a wheelbase that has been extended to a segment-leading 2,700 mm (106 inches) for comfort for all passengers.

In China, customers have a choice of two engines — a turbocharged 1.4L direct-injected LE2 or the naturally-aspirated 1.5L direct-injected Ecotec. Both motors are part of GM’s new global small-displacement engine family offering combined fuel consumption as low as 5.7 liters/100 km thanks to the introduction of fuel-saving technologies like the standard stop/start.

The 1.4L turbocharged LE2 generates maximum output of 110 kW (147 horsepower) and 240 Nm (177 pound-feet) of peak torque. It is paired with a finely-tuned intelligent seven-speed DCG transmission that delivers smooth and precise gear shifts.

The 1.5L naturally-aspirated motor generates 84 kW (112 horsepower) of maximum output and 146 Nm (107 pound-feet) of peak torque. Those who prefer this engine can select a new intelligent six-speed DSS transmission or a six-speed manual transmission.

To note, the same vehicle in North America is offered exclusively with the 1.4L Turbo LE2 mated either to a six-speed automatic (MNU) or a six-speed manual (MF3) transmission.

The all-new Cruze rides on a sporty chassis that was tuned at the legendary Nürburgring race track in Germany. It also comes with the GM-patented Watts link rear suspension.

From the start, the new Cruze was designed to be lightweight. In addition, increased use of ultra-strength materials have resulted in a weight loss of 120 kilograms (264 pounds) without impacting stiffness, thereby resulting in an agile driving experience.

Meanwhile, OnStar 4G LTE connectivity delivers as a Wi-Fi hotspot that enables users to connect up to seven mobile devices within a space of 700 square meters.

The introduction of this all-new, 2016 Cruze seems to result in the discontinuation of the previous iteration of the “new” Cruze, which was available exclusively in China.

It’s entirely possible that the 2017 Cruze hatchback will also become available in the Chinese market, though Chevy has not confirmed these plans as of this writing.

In addition, the first-generation Cruze sedan and hatchback remain on sale in China as the Cruze Classic.

*Price conversion from Chinese Yuan to U.S. Dollars was performed on July 16, 2016. Price conversions are only performed for comparative purposes, and might fluctuate based on when you read this story.