Only in the exorbitant land of America is something like a Corvette able to be considered a “momentum car.”

460 hp is plenty of power – but in the case of the 2017 Corvette Grand Sport, the power isn’t the greatest asset that makes it such a track star. It’s everything else. It’s the suspension. It’s the stickier tires and wider track width. It’s the blessed electronic limited slip differential. It’s the other-worldly brake system. It’s a $66,445, V8-powered American take on the Mazda Miata. Alright, so that last part may be a bit of a stretch, but it’s the concept of maintaining speeds through corner entry, mid-corner and corner exit on the track – rather than foot-to-floor pedal mashing on the straightaways to make up lost time – that makes the C7 Grand Sport yet another world-beater from the Corvette family.

For example, the Corvette team claims that the 460 hp C7 Grand Sport was just a second off the lap time of the legendary C6 Corvette ZR1, which had 638 horsepower. The old ZR1 mostly relied on its 6.2L LS9 supercharged V8 engine to navigate the 2.9-mile Milford Road Course as quick as possible. The C7 Grand Sport, down an astounding 178 horsepower from the ZR1, relies on keeping the speed up through the multiple chassis stressing curves to get within kissing distance of one of the fastest road cars GM has ever made. This is because the 2017 Corvette Grand Sport features the best of what’s offered in the currently range-topping, 650 hp Corvette Z06, sans the LT4 supercharged V8 engine. The Grand Sport makes do with the naturally aspirated LT1 V8 instead. 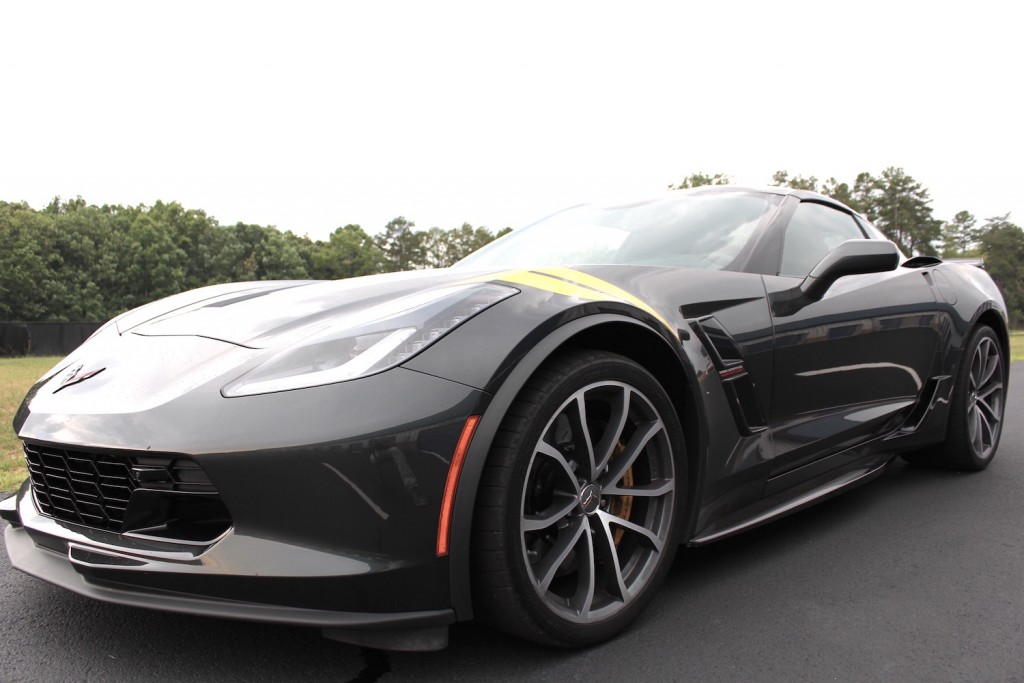 Down on power (relatively speaking), the C7 Grand Sport exposes the ability of its driver, forcing them to exhibit their skills in braking, steering, reciting the proper racing line, and demonstrating intestinal fortitude.

A track day around the serpentine road course of Atlanta Motorsports Park with Chevrolet only galvanized this notion. Tucked away in the rolling hills of Dawsonville, Georgia, the 2-mile road course proved to be the perfect location for a good-old-fashioned shakedown. Featuring elevation changes of up to 100 feet, decreasing radial turns, a fourth-gear sweeper, stomach-dropping dips, and more, the AMP road course was perfect for a momentum car. An 11.8-second-quarter-mile momentum car.

Unlike tracks such as Road America, which feature multiple straightaways favoring high-horsepower cars, the AMP road course proved to be incredibly technical, as the asphalt whimsically noodled over and around the hilltops, leaving virtually no room for anything linear. Turn 17, a high-speed, blind right-hand kink just before the finish line, keeps drivers honest in the only section that resembles a straightaway. Turn 11 – a sudden dip just before a steep climb to Turn 12, compresses cars so much that their underbodies will scrape if taken with enough speed. Turn 12, oppositely, is designed to reduce grip and put cars on their tip toes, cresting the hill with a hard right, only quickly flowing into a blind downhill left for Turn 13. Then comes the gentle throttle and steering inputs for the 14-16 sweeper, gradually increasing speed to over 100-120 mph in the C7 Grand Sport around this section. Good thing we were all strapped with HANS devices, in the event one of us ran out of talent.

Yet the Corvette Grand Sport doesn’t set itself out to be a widowmaker. With the familiar Performance Traction Management system standard, the computer magic does its best to act as a safety net, should the car attempt to break loose in some way. However, yaw-sensing traction control does shut off in the advanced settings of Sport 2 and Race modes. Moreover, PTM is so sophisticated, that it can make even the fastest drivers faster, over the traditional method of simply shutting off the traction control nannies altogether. 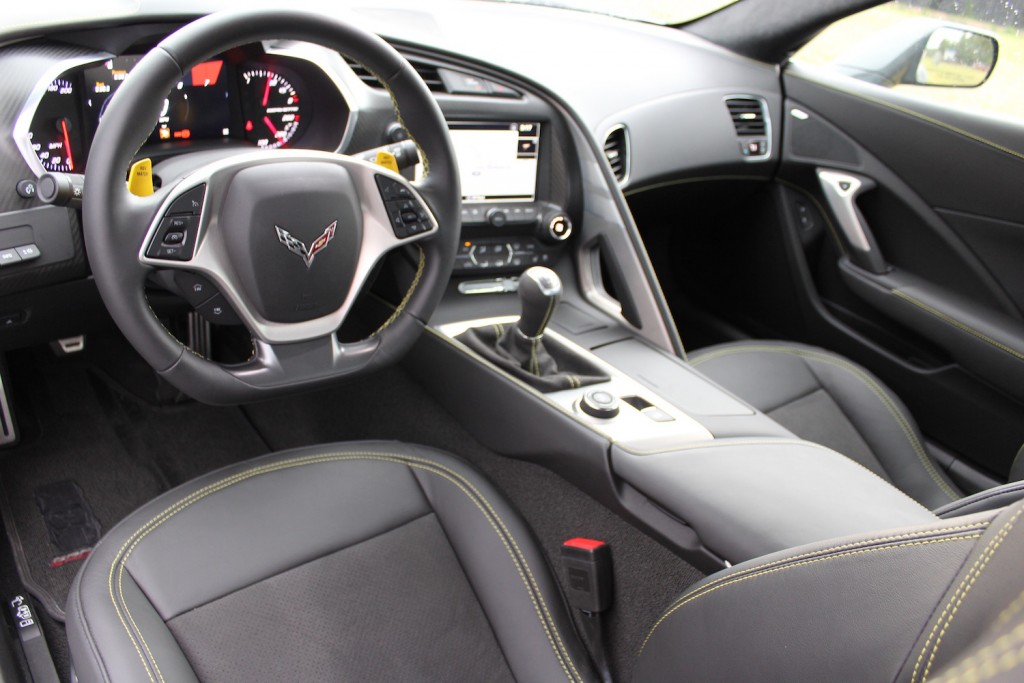 The six-piston carbon ceramic braking system sourced from the Z06 will also bite down for dear life, reducing closing speeds at near-miraculous rates, which of course also helps keep things away from the Armco. It’s disorienting how quickly these massive Brembos can bring the Grand Sport down from triple-digit speeds, and to the perfect cornering velocity. It was actually rather easy to over-apply the brakes in some sections, when the magnetic-dampened suspension and available Michelin Pilot Sport Cup 2 tires deserved more trust. Through the day, however, I leaned more and more on the the setup of the C7 Grand Sport to slingshot through the corners. That’s where it exhibits Z06-like manners – without the bite of 650 horsepower. This makes the Grand Sport much, much more manageable to pilot. Seriously, 650 horsepower in the Corvette platform can be uncomfortably gnarly. I personally think that there’s a sweet spot in the 500-575 horsepower range for the C7 Corvette, but only time will tell if the development team agrees.

On the track were 2017 Corvette Grand Sports with both 7-speed manual and 8-speed automatic transmissions, but all of them had the available Z07 package. Yes, it’s a package that’s also available on the Z06. With it comes super sticky Michelin Pilot Sport Cup 2 tires, the previously mentioned carbon ceramic brake system — which brings the car to a stop from 60 mph in less than 100 feet —  1.2G lateral acceleration and a 0-60 time of 3.6 seconds. That’s a gain of .17G and a faster acceleration time of .1 seconds over the already highly capable Corvette Stingray Z51. Mostly all thanks to the aggressive tires. A Stage 2 aero kit – adding a more aggressive spoiler, rocker panels and aggressive front splitter, were also present and accounted for. 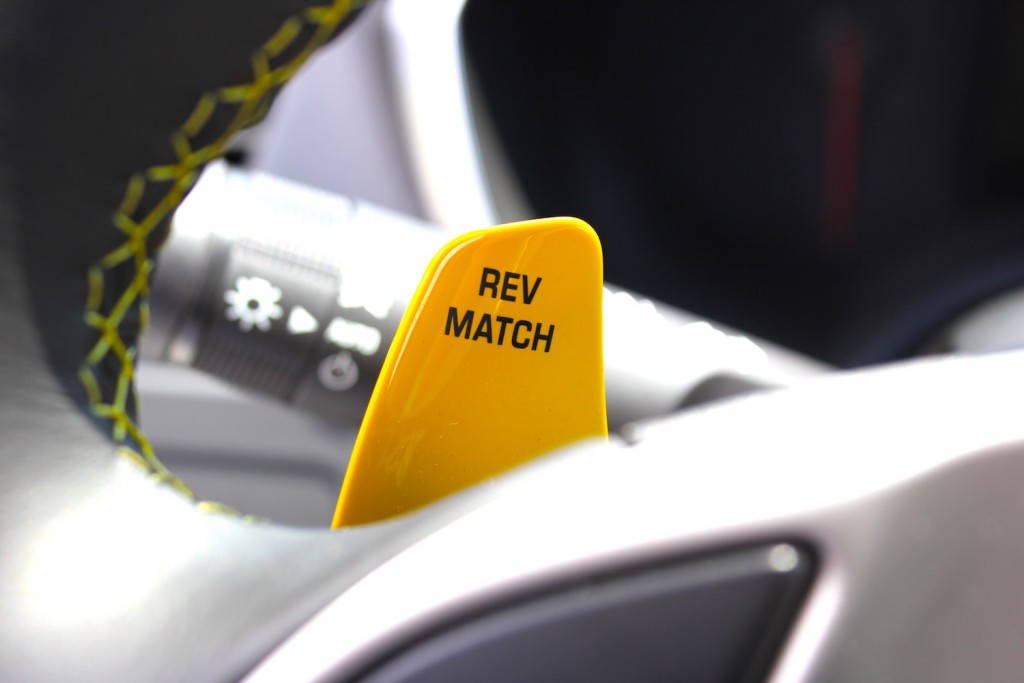 Other visual cues of the Corvette Grand Sport, include the widened Z06 body, but not the smoked tail lamps. Instead it keeps the reds of the Stingray – a key design choice that symbolizes the middle ground between the Stingray and the Z06. There are also exclusive wheel choices, and the ever-sexy fender stripes on the available Heritage Package. And did we mention the optional colored steering wheel paddles and red seat belts? Because (finally!) they debut in the Corvette Grand Sport. Other cues such as exclusive fender vent badge work, and a “Grand Sport” emblem on the center console round out the race-ready looks of the C7 Corvette Grand Sport. If the stripes and the loud seat belt color is too much for you, well hey, no worries. You don’t have to get them.

To state the obvious, the 2017 Corvette Grand Sport is aimed squarely at the purist, and does its best to carry on the spirit of the original Corvette Grand Sport from 1962 – a vehicle that represented the epitome of Corvette track capabilities of the time. They were factory-built race cars offered to customers, roll cage and all, aimed squarely at the dominating Shelby Cobra. Intended as a limited production run of 125 models, a sudden corporate ban on racing meant that only five Corvette Grand Sports were ever completed, much to the dismay of Zora Arkus-Duntov and Bill Mitchell. The rarity of the original Corvette Grand Sport only adds weight to the nameplate, and sets up the 2017 model to become an instant draw for collectors and track rats alike. And with a starting MSRP of $66,445 for coupe models and $70,445 for convertibles, the C7 Grand Sport continues the Corvette tradition of offering the best performance you can get for the money. And if you ask us, the Grand Sport is hands-down the one to get right now. 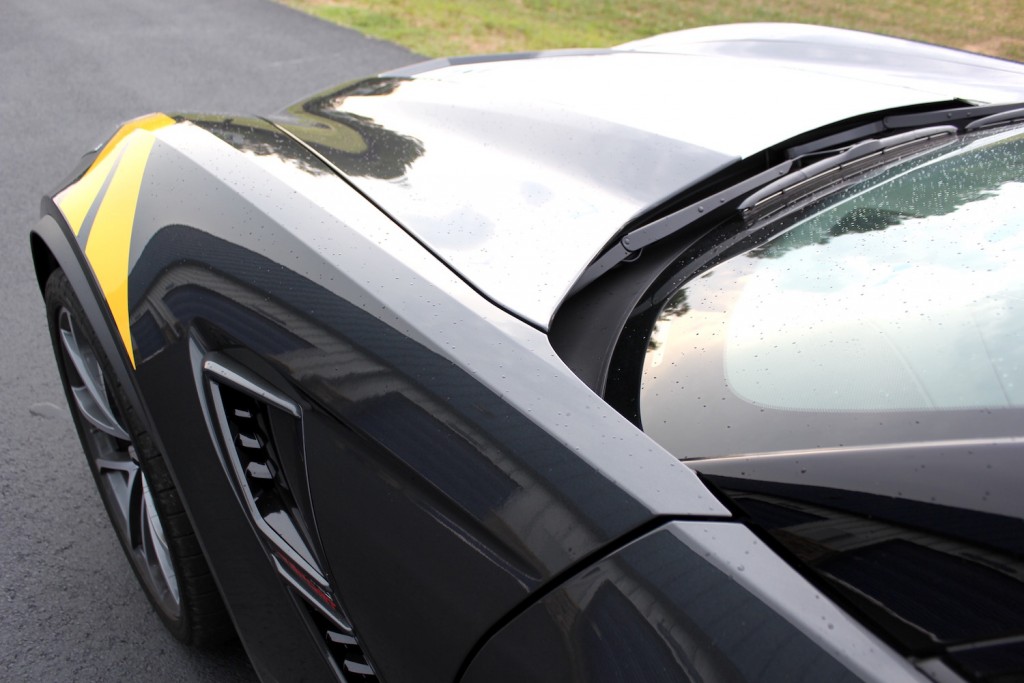