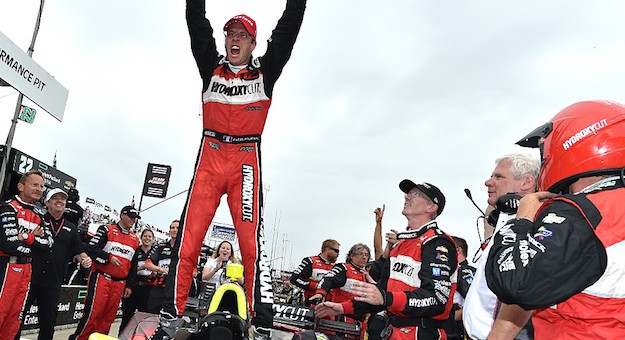 Sebastien Bourdais put Chevrolet in the winner’s circle at its home race today, prevailing over the strong Team Penske cars to take his first victory since he put on a clinic at last July’s ABC Supply 250 at Milwaukee.

Most Verizon IndyCar Series fans had probably pegged a Team Penske driver to take Chevy to the top of the podium after the team’s drivers claimed first, second and third in Friday’s qualifying session. But despite a clean getaway and strong start from pole-sitter Simon Pagenaud, they could only muster a podium finish between their four drivers.

Many drivers pitted for tires early, switching to the more durable black sidewall Firestone tires after completing their mandatory two laps on the red sidewall options. Soon after on Lap 10, the first caution of the race came out when Chip Ganassi Racing’s Max Chilton hit the outside wall at Turn 7.

Pagenaud, who had yet to pit, led the race following the restart before pitting for fresh rubber on Lap 23. This forked first over to his teammate Will Power, with another Penske driver, Juan Pablo Montoya, following in second. Pagenaud then re-took the lead on Lap 32, capitalizing on a mistake from Power and Montoya as they battled for first.

A minor shunt from Schmidt Peterson Motorsports’ James Hinchcliffe brought out another yellow, sending Pagenaud and many others to pit road. Montoya, who elected not to pit, then moved into the lead for the restart with Honda’s Graham Rahal and Ganassi’s Scott Dixon in second and third, respectively. The caution was extended after Power’s car experienced a mechanical failure and went off track, with the race not resuming until Lap 46.

With most of the field on different pit strategies, the true leader of the 70-lap race wouldn’t become apparent until after the leaders had taken tires. Rahal stopped on Lap 51, while Montoya and Dixon pitted on Lap 53 and Lap 55, respectively. Bourdais then briefly led before pitting on Lap 57, with Daly then moving into first.

Bourdais managed to work his way back into first following the stop, while Daly re-entered the race in second. The pair easily held position to the finish, while Penske’s Montoya claimed third place.

The Verizon IndyCar Series takes to the streets of Detroit tomorrow for Race 2 of the Chevrolet Dual in Detroit.