Zora Arkus-Duntov, long known as the father of the Chevrolet Corvette, wasn’t just any engineer who happened to also have a passion for fast cars, he was also a skillful driver with a history of racing Porsches at the 24 Hours of Le Mans.

General Motors and Chevrolet took note of Duntov’s skills in 1955 ahead of the 1956 Chevrolet lineup launch. Chevrolet was keen to stir buzz up for its all-new, small-block V8 engine and decided to take the 1956 Chevy racing at Pikes Peak.

And it chose Duntov to wheel the car to victory. He agreed on the spot to the idea.

The 1956 Chevy was wrapped in camouflage as to not spoil any design changes, and began testing in nearby Manitou Springs at a GM high altitude facility. Duntov’s mission was to show how well the 265 cubic-inch small-block performed, paired to a three-speed manual gearbox and a 4.55 rear end.

Come race day, Duntov delivered. The Chevrolet engineer wheeled the 1956 Chevy up the course in 17 minutes and 24.05 seconds, setting a new sedan class record in the process by more than two minutes. 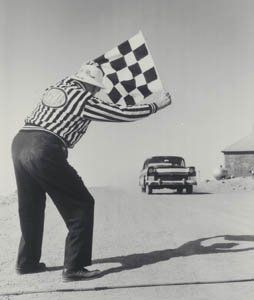 Needless to say, Chevrolet received what it was looking for. A slew of promotions followed to tout the performance and prowess of the small-block V8, as well as the handling of the 1956 Chevrolet.

Duntov would go on to contribute to many performance programs throughout GM’s portfolio. Because having someone who knows how to shake down a vehicle is the best kind of person to have on board.