Nearly every classic vehicle to cross the block at prestigious auctions, such as Mecum and Barrett-Jackson, is aesthetically pleasing. But, as we’ve said before, every once in a while a car comes around that truly hits home, for some reason or another. In the case of this 1968 Chevrolet COPO Nova SS, every box is checked off. It’s got the looks, the historically rich context, and our favorite part – the performance.

This COPO Nova SS is number 4 of 50 ordered by Fred Gibb. He and Vince Piggins were interested in coupling the Turbo Hydra-Matic 400 transmission with L78-equipped Novas in order to create a winning combination for the NHRA Super Stock competition. Thus, Piggins submitted a request for 50 examples (NHRA’s minimum required number) of the proposed machine. Gibb would be responsible for buying and reselling these Novas. Fortunately for him, he knew a guy who would certainly be interested. 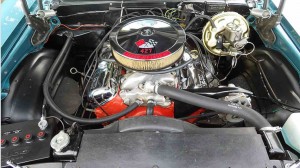 At the time, Fred Gibb sponsored the man himself, pro driver Dick Harrell, a.k.a. Mr. Chevrolet. Harrell saw the COPO Nova SS’s true potential, and after building high-performance Camaro “supercars” with the Nickey franchise and Don Yenko, he felt that he could take the Nova on himself. He knew that theses COPO Novas could be modified for street use and for other drag racing classes. One such modification would be swapping out the L78 for an L88 427 V8.

What’s special about this particular L88-equipped Nova is how it came to be. All 50 of these specimens featured the same options: solid-lifter L78/TH400 combination with 4:10 PosiTraction differential, power drum brakes, radio-delete, and the Super Sport trim package with standard dual exhaust and bucket seats. Most of the Novas delivered to Gibb were finished in Fathom Blue, but the one shown here is a beautiful Tripoli Turquoise. 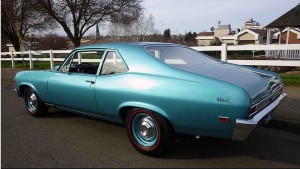 While the car was supplied by Gibb to NHRA for official approval, it would never make it to the track. Instead it was purchased by Jim Mirowski of Topeka, Kansas. Mirowski bought the car in mostly stock form, though it did feature a few goodies from Harrell, including a replacement ‘stinger’-type fiberglass hood. The upgrades did not void the factory warranty, which was fortunate as Mirowski’s newly purchased Nova would suffer a bearing failure in less than 500 miles.

The culprit was a water pump with a factory defect, and after learning this Harrell suggested that the dealership replace the engine with an L88 short-block it had on hand. Mirowski agreed to this, a $120 upcharge, and the rest is history. Well, actually, with a family to look after the young Jim Mirowski traded the Nova SS in on a new Vega. Talk about a downgrade.

Eventually Ed Cuneen of the COPO Connection came across an eBay listing for this Nova, and after verifying the details he purchased it and began an exacting restoration. The engine was rebuilt with a 512-casting high performance 427 big-block, the history was checked, and the car went on to be sold to the next owner, Dave Belk.

And now the car is up for grabs again, and it isn’t very often that we see a Nova at these big time auctions. If you’re genuinely interested in owning a true piece of COPO history, now’s your chance. The car will cross the block at Mecum’s Portland auction starting on June 17th.