At this point, we’re no strangers to the Cadillac ATS-V. We know its strengths, its weaknesses… what we love and what we wish the car possessed. We find the Cadillac ATS-V, especially the coupe, to be the best looking in its segment. Knife-edge looks, with tasteful bits of carbon fiber, not too much chrome, and an intimidating stance.

The interior has some great qualities. Our Velocity Red tester featured the optional Recaro seats ($2,300), the Luxury Package ($2,100) that yields alloy sport pedals, HID headlamps, Bose audio, 110-volt outlet, universal home remote and nav system. Also present were carbon fiber panel inserts, sueded steering wheel and gear lever, and saffron seat back inserts. All of that – great. Though by now you’ve surely heard quips about the dated gauge cluster, and complaints about the user-unfriendliness of CUE. We’re not really going to waste our word count on either of those things. We know. You know. More importantly, Cadillac knows.

The duality of the ride, softish to firm, thanks to the ubiquitous magnetic ride control, keeps things relaxed enough on the cratered excuses for Michigan roads. Yet rarely was the car set in “Tour” mode. Almost always did I keep the setting in “Track” mode – because that’s the mode the ATS-V wants to be in. Track mode opens the throat of the ATS-V, letting out a surprisingly bass-heavy note at idle (for a twin-turbo V6 configuration), and also maps the braking, throttle and steering inputs to match the aggressiveness of the ATS-V exterior. In short, the driving dynamics of the ATS-V are its greatest qualities. It has a natural want to stay neutral, both in the corners and under braking, while its shortened wheelbase invites drivers to work on their oversteer. Yet, something doesn’t feel complete. 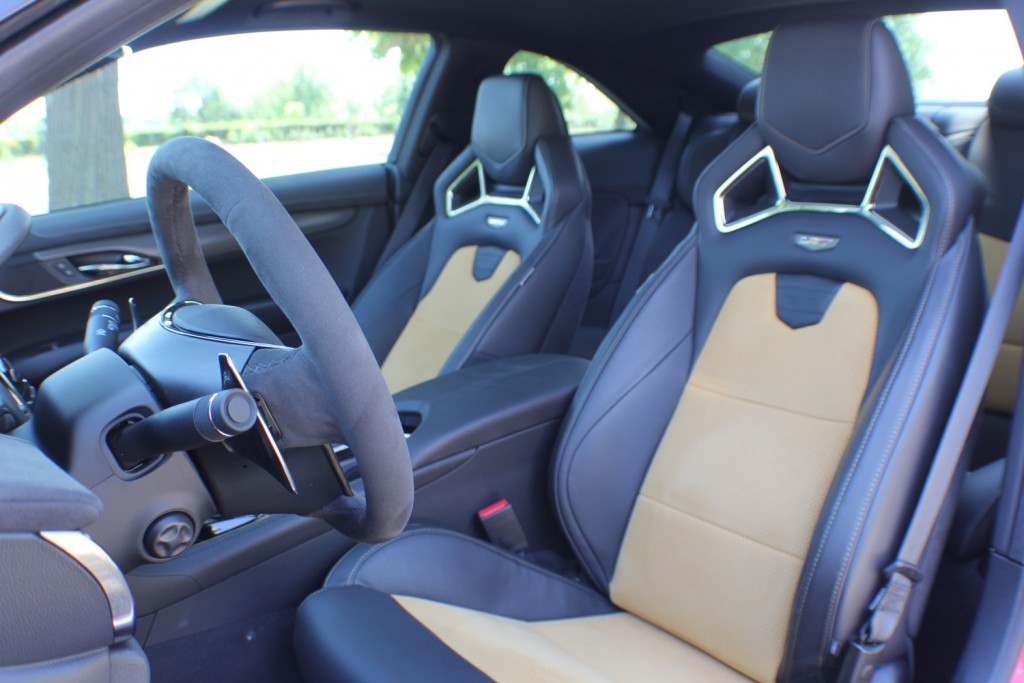 The biggest challenge for the ATS-V is perhaps that it benchmarked the wrong car, maybe even the wrong brand. The BMW M3 isn’t the enthusiast’s wet dream that it used to be. This is also a problem for BMW, because it is alienating the audience that made its bavarian propeller spin with brand cachet in the first place, a move that will catch up with them eventually. Not long ago, if you were driving an M3, you may have been stereotyped as a toolbag, but you may have been a toolbag that appreciated an ultimate driving machine. And these buyers were on the front lines as grassroots brand ambassadors. These days, you’re just a toolbag that needs a BMW badge to pair with your Louis Vuitton belt and Hugo Boss loafers, because that’s the car that everyone expects you to drive, you sucker. And double parking, everywhere. Pandering to this target market is what softened up BMW M cars, and for any brand looking to deliver the best performance car in any segment, this is a dangerous path to follow. Not to mention, if somebody wanted something so lock-step with a BMW M3 or M4, there’s a high chance they’ll go for the recognized nameplate anyway, to avoid explaining themselves.

It needs to be noted that the car winning the latest C-segment luxury performance comparison tests is neither the BMW M3 (which is currently the best 5 Series BMW has ever made) or the Cadillac ATS-V. It’s been the Mercedes-Benz C63 AMG. When inquiring as to why the AMG is the the current king of the hill, when it’s both heavier and pricier than its rivals, my industry colleagues unanimously referenced one crucial factor: a snorty, visceral V8 engine. It’s a characteristic that gives the car soul. What did Cadillac have at its deposal, and yet chose to apply a 464 hp twin-turbo LF4 V6 (that reminds me of a vacuum cleaner at wide open throttle), because reasons? A lively, small block V8. What do two of Cadillac’s celebrated vehicles, the Escalade and CTS-V, have in common? Exactly that. Perhaps not so coincidentally, both vehicles are also doing well in sales, and command sums of money greater than that of the ATS-V.

Between you and me, a Cadillac ATS-V with a V8 engine – which would deliver broad power all the way through the rev range, as well as providing a sound of dragon’s breath – would more effectively warrant the $79,205 price as tested. It would also represent something unique to the segment, thus giving the Cadillac a flair and style all its own. “Blah blah but Lexus has…” – Lexus has nothing but the thought of it. With complaints of a lack of balance, and an overall softness, the naturally aspirated V8-powered RC F needed to be more properly executed. And if there’s any automaker that knows how to properly tune a rear-wheel-drive chassis right now, it’s GM. Because it’s not just the ATS-V that’s exemplary in this department. The CTS-V, Corvette and Camaro are all stalwart handlers. 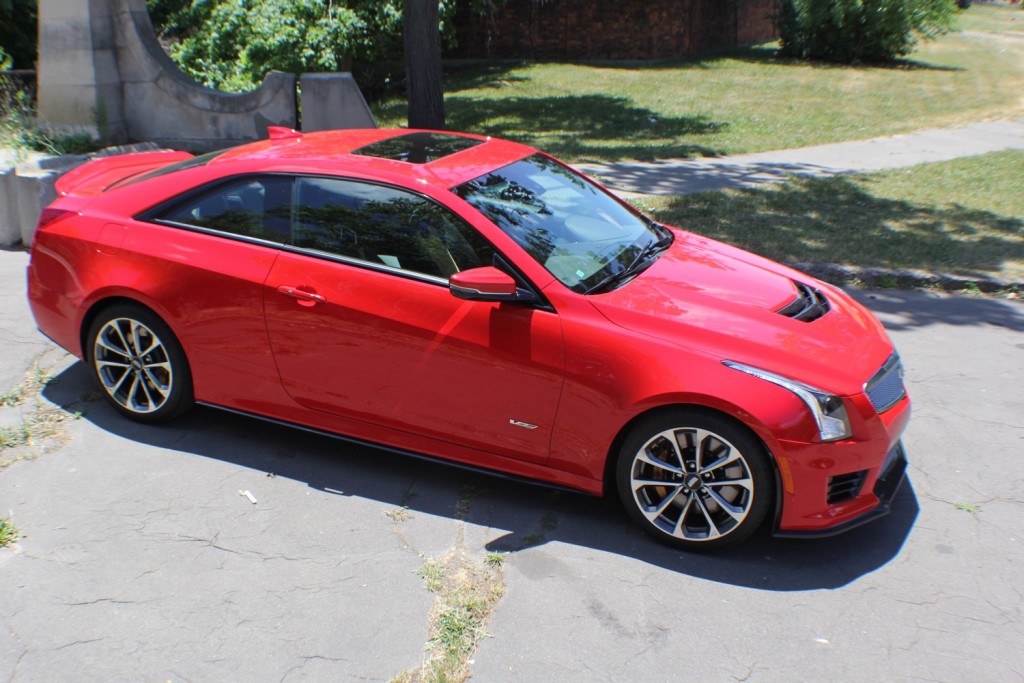 Cadillac tells me that, in terms of raw sales count, ATS-V and CTS-V sales are somewhat comparable (combining ATS-V Sedan and ATS-V Coupe in the same figure), and so far the ATS-V Sedan has led the ATS-V Coupe in sales. Yet, the difference is in the market demand, compared to the CTS-V. On the side of the CTS-V, Cadillac has so far been unable to meet demand despite stretching production capacity by 10% over the original planned maximum, and have fully sold out for the 2016 model year a few months ago. With 640 M5-crushing horsepower on tap, a supercharged LT4 V8, killer looks and a nameplate that has been around for 12 years, of course the CTS-V is going to steal attention from its adversaries.

With that said, the ATS-V remains a model still that is being discovered by new customers, even traditional V-Series customers, and Cadillac dealers still figuring out how to sell anything beyond an Escalade. In short, the ATS-V has significant room to grow yet in its sales. However, those that buy them tend to fit their ATS-V with the Recaro seats, and likely the Carbon Fiber Package for enhanced aerodynamics. The smart ones get the six-speed manual transmission that comes with active rev matching (try it once and it’s near impossible to quit), no-lift upshifts and even a launch control feature. The ($2,000 option) 8L90 automatic found in our tester performed its duties better under the stresses of spirited driving, versus casually cruising from place to place. Versus the the sometimes delayed knee-jerk shifting when driven lightly, the ATS-V sharpens right up with quick and precise shifting when paired with a heavy foot. Again, because that’s what the ATS-V wants. And when I’m giving it the beans around some engaging Michigan backroads (they do exist!), the faults of the ATS-V melt away, and I’m left enjoying the drive. Which is what the segment needs more of in the first place. Maybe it does have that E46 M3 spirit after all.

So, is the ATS-V perfect? No. But we’ll be damned if it is not a great start. Cadillac was able to deliver arguably the best handling car in the segment, while once dealing with empty coffers at the time when product planners were figuring out how to make the ATS-V feasible enough to even see production. For that, it deserves praise, and your undivided attention, because it’s a solid performer that nobody is buying. Now, with billions set aside to revitalize the product portfolio, and the one-and-only Johan de Nysschen at the helm, we can’t wait to see what’s next for the Cadillac V-Series lineup.