A Mecum auction taking place in Portland on June 17 – 18 will offer not one, but two extremely rare and highly coveted Chevrolet Novas. We’ve already gone over the 1968 COPO Nova SS ordered by Fred Gibb, and the other Nova is what you see here – a 1 of 175 1970 Yenko Nova Deuce.

When trying to come up with the words to accurately describe the grandeur of such a car, we felt that anything we said about it wouldn’t do it justice. It might not be as eye-catching as the Tripoli Turquoise finish of the ’68 COPO Nova SS, but it’s still an exceptionally sharp looking car. Everything about it signifies power; the Yenko decal, the beefy Firestone Oval tires, even the overall shape of the car itself is something that we have been conditioned to think of as “fast”. 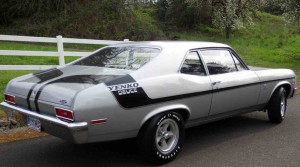 This notion of being fast is rooted in the work done by Fred Gibb, the Nickey franchise, and Don Yenko. Yenko was already known for his work on the COPO Super Camaros and Chevelles, which utilized the mighty 427-cubic inch L88 V8. In order to strike a better balance between the lightweight Nova and a high-performance powerplant the Yenko Nova Deuce was created. Only 25 of these vehicles were finished in the subtly handsome Cortez Silver.

Instead of the L88 the Yenko Nova was built with the Z28-sourced, 350-cubic inch LT1 with an output of 360 hp, backed by a Muncie M21 4-speed transmission and 12-bolt rear with 4.10 Positraction. Other performance features were also added as part of the COPO 9737 Sports Car Conversion package, such as the F41 Special Suspension, which included a 13/16-inch front sway bar, an additional rear sway bar, and a heat-treated ring and pinion. You can see other highlights for this vehicle below:

This Nova has been professionally restored, and according to the images it looks even better than the day it rolled off the lot. With its accurate documentation and stunning looks, we imagine that this classic Chevy will fetch a substantial offer.