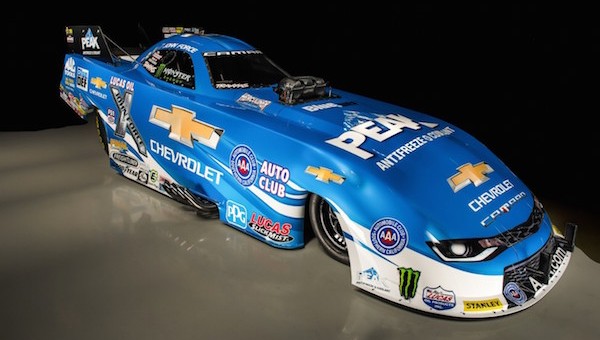 John Force has unveiled his all-new 2016 Camaro SS Funny Car, which he’ll for the first time this weekend at the NHRA Kansas Nationals at N in Topeka, Kansas.

Force, a 16-time NHRA champion, is the first racer to adopt the sixth-generation Camaro SS Funny Car body before his teammates Courtney Force and Robert Hight make the switch later this season.

The new Camaro SS Funny Car body was optimized in the wind tunnel for the best possible airflow management and downforce and is also lighter than Force’s previous Funny Car bodies. It also incorporates dual blow-out panels, which relieve underbody pressure to ensure the body stays attached to the chassis if the engine fails.

“I started my career in a Chevrolet and I couldn’t be more excited to put this new Camaro SS Funny Car on the track,” said Force. “With all the assistance from Chevrolet, it not only looks great, it’s designed to perform better than anything we’ve had before, with a shape that should help us get down the track quicker and with greater stability.” .

“The 2016 Camaro has been a great success in the showroom and Chevrolet is proud to contribute to its debut in NHRA’s Funny Car class,” added Chevrolet’s vice president of performance and motorsports, Jim Campbell. “It joins the 2016 COPO Camaro in the Sportsman classes, strengthening Chevrolet’s presence in drag racing, which dates back nearly 60 years.”