General Motors has filed an application to register Riviera as a trademark with the United States Patent and Trademark Office (USPTO), GM Authority was first to discover.

The automaker’s May 18th, 2016 application is assigned serial number 87041668 and specifies that the mark will be used for “Badges for vehicles”. 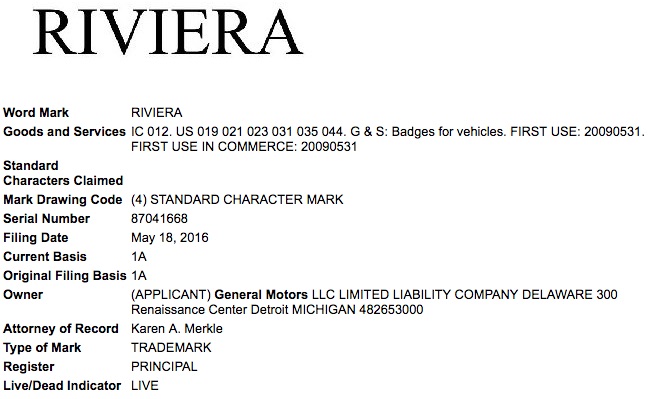 We should first note that General Motors currently does not hold any trademark rights to the Riviera name with the USPTO. It did, however, file a trademark application for the term “Riviera” back in March of 2013. That filing, however, was categorized under the goods and services section of “Motor land vehicles, namely, automobiles”, whereas the one being described here is for “badges for vehicles”.

The March 2013 filing was filed slightly before the unveiling of the Buick Riviera Concept at the 2013 Shanghai Auto Show. However, GM will likely end up abandoning that March 2013 filing, since the automaker is running out of time (a total of three years) to file a Statement of Use — a necessary document in the trademark process that demonstrates to the USPTO that the mark being applied for will be used in a real-world product or service.

And so — as with other recent GM trademark filings, we will hypothesize that this particular one is either for a concept car or a future production-intent vehicle.