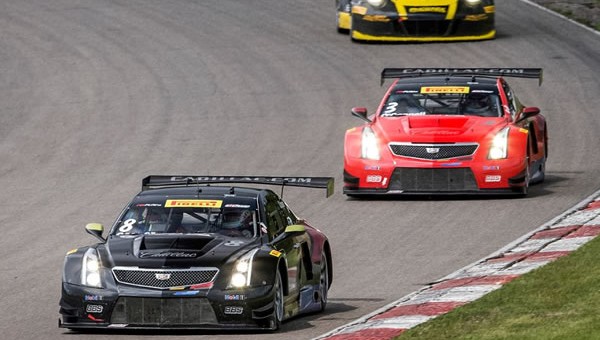 Cadillac Racing had a tough outing to Canadian Tire Motorsports Park in Ontario this past weekend, missing the podium in both of the weekend’s two races. The Cadillac ATS-V.R underwent Balance of Performance adjustments ahead of the double-header event, with the Pirelli World Challenge series cutting the racecar’s boost pressure.

The first race of the weekend saw drivers Michael Cooper Johnny O’Connell start from tenth and 12th on the grid after a tough qualifying session. Down about 30 horsepower compared to earlier in the year, neither O’Connell nor Cooper had the pace to improve on their starting positions.

For the weekend’s second race, Cooper started from tenth and O’Connell 13th. With rain on a portion of the circuit, the race started under caution and went green two laps later. A two-car wreck soon brought the yellow flag out, bumping both Cadillacs two spots up the running order. Again the ATS-V.Rs were unable to pass, finishing eighth and tenth overall.

“It is pretty clear to everyone watching that we were taken out of this weekend,” a O’Connell said. “We would just get motored down the straight away. It is frustrating for the whole team. We can’t pass anyone. I got passed by Andrew Davis in the Porsche, but he just drove by me down the straight. We haven’t forgotten how to drive and the team hasn’t forgotten how to prepare a race car. You go from where Michael and I were first and second row guys to being relegated to rows five and six.”

The first round was won by Porsche’s Patrick Long, with Bentley’s Andrew Palmer and Acura’s Ryan Eversley taking second and third, respectively. The second was again won by Long, who was follow across the finish line by Palmer and Audi’s Kyle Marcelli.