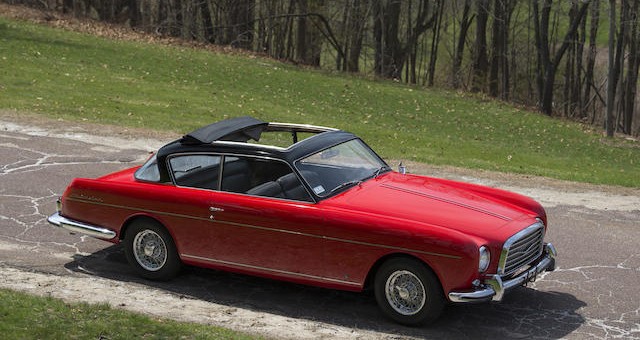 What you’re seeing is a hand-built 1957 Bill Frick Special GT. It’s a one-off coupe engineered by Bill Frick, designed by Michelotti, and bodied by Vignal. What makes this even more grand is that the entire history of the car has been documented and preserved – there’s no doubt that this is the real deal.

The GT is powered by a 331 cubic-inch Cadillac V8 engine with dual four-barrel carbs and an output of 270 bhp at 4,800 rpm. The V8 is matted to a 4-speed manual transmission, and the coupe is held by an independent front suspension and live rear axle.

Who was Bill Frick? Bill Frick was the first man ever to win the “Sports Car Mechanic of the Year.” A 24 Hours of Le Mans competitor by the name of Briggs Cunningham was impressed by Frick’s work when he saw the ‘Fordillac,’ a 1949 Ford body with a 160 hp Cadillac V8, at an SCCA hill climb event. Cunningham would go on to purchase Frick-Tappet Motors, and would move the business to Florida. Frick continued building 1-2 finishes including the Studillac, a 1953 Studebaker with a 210 hp Cadillac V8, and the Special GT you see.

In short, Frick loved wedging Cadillac engines into unique bodied vehicles, and was very successful in doing so.

In 1955 the GT was Frick’s answer to the then-new Studebacker lineup, which had severely cut the Studillac’s sales demand. Frick partnered with the well-known Italian coachbuilder, Vignale, and refined the chassis by adding crossmembers, better shock absorbers, higher rate springs, a stiffer anti-roll bar, and track bars. This new creation was then tested by Road & Track who called it “America’s answer to Europe.” To add to the list of achievements, the car also appeared on the cover of Sports Car Illustrated in May of 1956.

In addition to the aforementioned prototype model was a convertible model and the single production coupe Bonhams is offering. Its first owner was Mr. John Blodgett Jr., a wealthy lumber baron residing in Grand Rapids, Michigan. Originally the car came with a French Pont-a-Mousson four speed transmission, which Frick himself was against. Frick would later install the General Motors T-10 floor-mounted four-speed that he recommended to Blodgett.

In the mid-60s, Blodgett would give the car to his secretary, who would then keep the car  before selling it to its third owner, Mr. Emmett, in 1970. The Oregonian painted over the faded blue paint with silver, and sold the car after three years. The fourth owner, Mr. Benz, kept the car mostly tucked away until the late 80s. It was then painted red and purchased by a dealership on the West Coast, and sold to the present owner in 1989.

The car sits with just over 40,000 original miles, and is in excellent shape. It comes with the original jack and correct bag, as well as an extensive history file and binder full of receipts.The GT will cross the block at the Greenwich Concours D’Elegance Auction on Sunday, June 5, where it is expected to sell for $180,000 – $220,000.