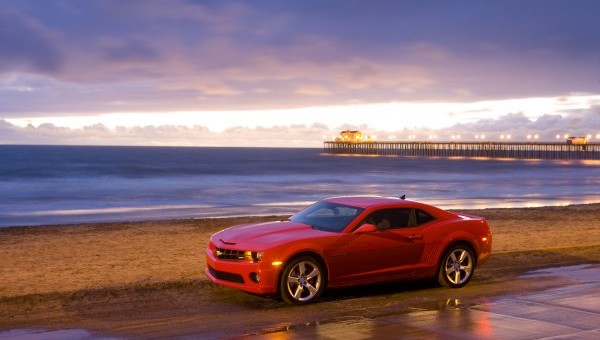 File this to things we never even thought imaginable. The idea of a giant Duramax diesel, V8 engine under the hood of a fifth-generation Chevrolet Camaro is a wild one, but yet, here it is.

Hot Rod had the opportunity to sit down with the father of this creation, and it’s a wild one at that. Not only is there a colossal diesel engine under the hood of this 2010 Camaro, but it’s been positioned so carefully that it looks factory. Creator and owner, Nathan Mueller, stated the goal was to make the swap as clean as possible, fooling innocent bystanders that this could have rolled off the assembly line this way.

It started with lowering the subframe three inches, allowing the Camaro’s hood to close without pieces being cut and fabricated for a messy, chopped up look. Custom spacers for the front end hide the extra 400 pounds in the front, keeping the stock ride height in tact, too.

There were his share of problems, though. When readying the 6.6-liter Duramax for swap, he noticed the Allison 2400, five-speed automatic looked to be a major wall between completing the process.

“I had an ’07 Chevrolet Kodiak shuttle bus for a donor vehicle. When we went to lower the engine and the Allison 2400 five-speed automatic transmission into the Camaro, it was immediately clear the unit was not going to fit. As a rule, I do not cut transmission tunnels or firewalls if I can help it, and that Allison was making it look like an impossible task.”

However, he managed, and everything fit snugly under the hood after tedious work.

“The fact is, it really isn’t too hard to put a diesel engine in anything if you don’t mind chopping a big, ugly hole in the hood and having stuff stick out,” Nathan said. “That was not the goal of this project at all. I like doing things no one else has done and doing them right. It took a long time for us to figure out what to do, but when my buddy Colin and I did, it was absolutely the right thing.”

Now, the only sign of the unique engine powering the fifth-generation pony car is an interesting idle, and traditional diesel fumes exiting the tailpipes. But, with 900 lb-ft of torque and a low overall curbweight, the powerplant is more than capable for some good times.