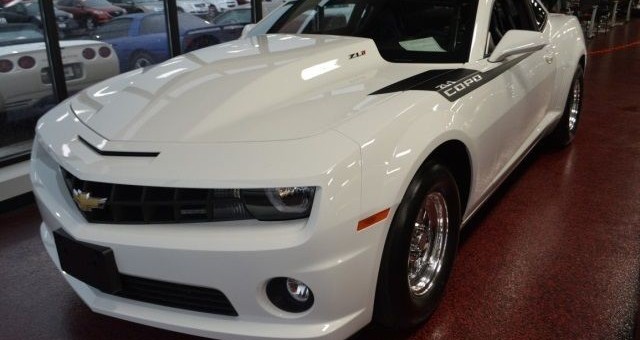 A street-legal Chevrolet “COPO” Camaro was recently listed on eBay for the price of $140,000. Since the listing was ended in less than a week we assume the seller, Rides Auto Sales, managed to get the price it wanted.

That may sound like a lot of money to some, but when you consider the fact that the Certified Race Chassis alone was $72,000 from Gas Monkey Garage, and all the work that’s gone into you’ll see how quickly it adds up. The engine work alone is extensive, but this Camaro was built and modified to be a top competitor at the track, yet still tame enough for street-use. Part of the work also included moving the engine back two inches in order to get more weight towards the rear. It’s registered as a 2013 Homemade Replica Camaro with a North Dakota title.

A fully-built LSA sits under the hood, which is also from a Camaro ZL1, and its been decked out with a Callies Magnum Crank,  Callies Ultra rods, and custom Diamond pistons. The seller gave an extensive list of engine components, from wrist pins, to valves, to  lifters, the whole nine yards. Additionally, the LSA exhales through a custom Hookers exhaust system worth over three grand. To transmit the immense amount of power, a Reid transmission was built with a rating of 2,000+ horsepower.

A Jerry Bickel 4130 chromoly driveshaft is utilized with a rear end by Strange Engineering which is based on a Ford 9-inch that’s said to withstand up to 4,000 horsepower – holy schnikes, Tommy Boy! The coilovers are also from Strange Engineering.

We’d have to say that the coolest part about this homemade COPO Camaro offering was the chance the buyer got to have it professionally tuned to their liking. The dealership stated that it was prepared to bring the vehicle to “your state on your track” with the owner, Jeremy Lee (certified 7 second NHRA driver), and the tuner, Scott Clark. It seems like quite a deal for someone who is looking to drop some coin on a top-dog contender, which the seller claims is capable of 800 to 900 wheel-horsepower.