General Motors has filed an application to register Graphyte as a trademark with the United States Patent and Trademark Office (USPTO), GM Authority has discovered.

The automaker’s January 5th, 2016 application specifies that the mark will be used to name “motor land vehicles, namely, trucks and sport utility vehicles”. 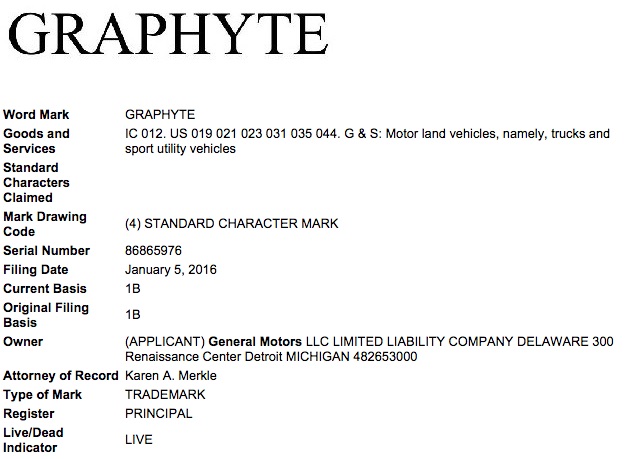 Those following GM Authority for the last few years might remember that this is not the first time that General Motors has attempted to acquire the Graphyte trademark, as it has filed for the name in 2012, 2008, and 2004. However, the company has not completed those prior registrations.

In addition, this new Graphyte filing is very likely the result of the fact that GM is running out of time to file a Statement of Use, a required document in the trademark registration process wherein the applicant describes exactly how it will use the mark in a real-world product service. The step prevents frivolous trademark registrations, otherwise known as trademark squatting. An applicant can request up to six extensions to file the Statement of Use, each lasting six months. As such, the time GM has to provide the USPTO with the document while not having an actual product using the Graphyte name has almost run out.

To us, Graphyte sounds really good as a GMC vehicle, as “GMC Graphyte” has a really nice ring to it. And if this trademark filing does, in fact, end up on a GMC vehicle, then our money is for a subcompact CUV that the brand has been lobbying for as the subcompact (B-segment) CUV space gains steam.

A subcompact GMC Graphyte would take on the Jeep Renegade, Honda HR-V, Toyota CH-R, Nissan Juke, as well as GM’s own Chevrolet Trax and Buick Encore in the mainstream subcompact CUV space. The vehicle would slot below the next-gen 2017 GMC Terrain, which will be repositioned to be compact in size, just as the all-new 2017 GMC Acadia makes the move from full-size to midsize.