Due to launch in the summer of 2016, the all-new Buick Envision appears to have everything to be in the sweet spot of the premium luxury crossover segment. Yet while Chinese customers have not only had the opportunity to check out the new compact crossover in person, but to also buy them in droves, those in car buyers in North America haven’t been as lucky. So we thought it a good idea to take a closer look at the exterior of the new CUV.

Taken as a whole, we would describe the exterior design of the 2016 Envision, which is based on GM’s new D2XX platform, as athletic, elegant, and (at times) even dramatic, thanks to its chiseled character lines. Shall we have a closer look? Yes. Yes we shall. 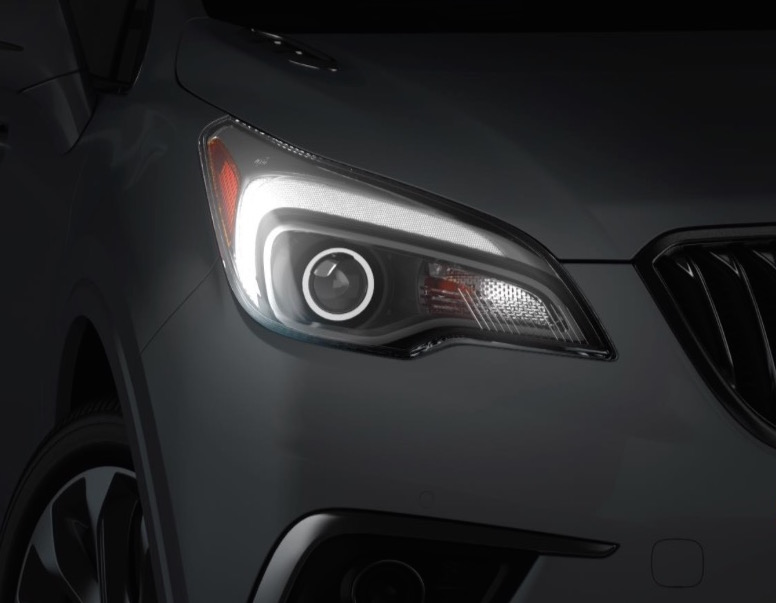 Stretching both vertically (towards the wheel well) and horizontally (in the direction of the grille), the Envision’s headlamps deliver a dramatic and sleek appearance. LEDs make that “wing” shape that has become part of the modern Buick–Opel-Vauxhall design language while the headlamps’ darker lenses add to the mystique and sporty aura of the front end.

In China, the Envision offers retractable, high-pressure headlamp washers. Unfortunately, we don’t expect the feature to make its way to North America. 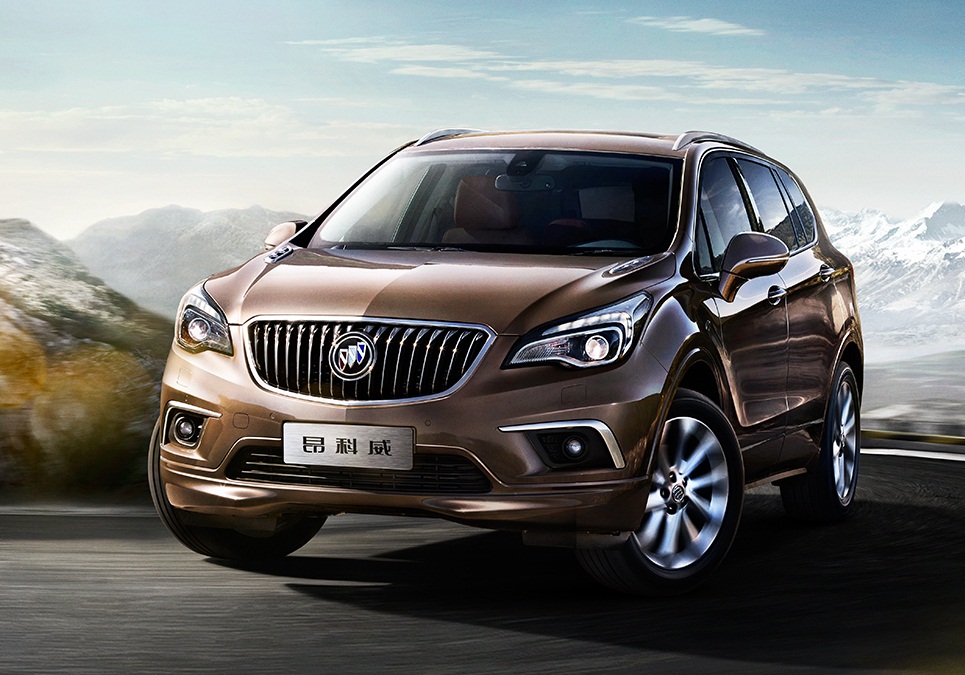 The Envision features Buick’s tried-and-true corporate waterfall grille. And though initial images show the U.S.-market crossover wearing the Tri-Shield badge in monochrome, something tells us that the production-intent version will have the shield in the recently-revised red, white and blue hues.

Interestingly, the Envision does not use Buick’s new corporate grille design introduced by the all-new, 2017 Buick LaCrosse. This is not an omission, but rather a byproduct of the development and market launch cadence. Despite launching in North America at roughly the same time, Buick completed developing the Envision roughly 18 months before the new LaCrosse, electing to launch it in China first (in the end of 2014).

But fear not: a mid-cycle refresh should equip the Envision with Buick’s new corporate grille. 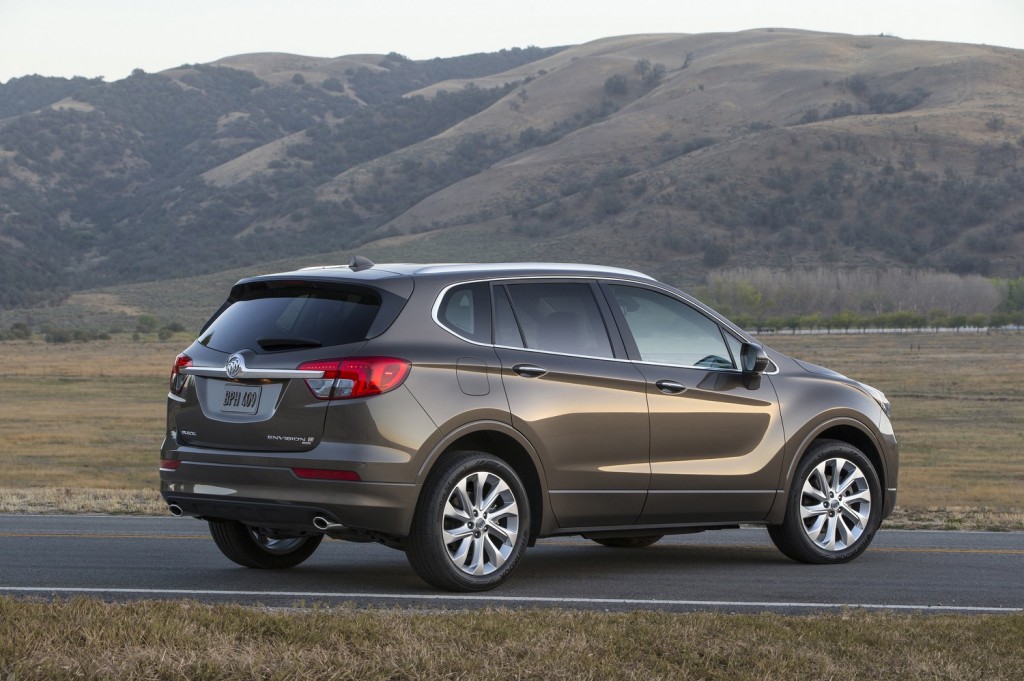 Cleanly integrated into the Envision’s roof are two chrome roof rails, enabling owners to install base carrier bars and customize them in order to transport skis, snowboards, bikes, kayaks, or cargo carriers.

The Envision’s profile features two primary character lines: the first creates a distinct “fold” in the body shape while integrating the door handles. In fact, the handles are positioned right on top of this line, with the handle for the rear door being slightly higher than that of the front. The design “just works” from any angle, and the handles feel like they simply “belong” in their places.

The second line begins at the outside edge of the headlight, flows over the wheel well, and then intricately creases into the forward portion of the front door, tapering off at the distal end of the rear door. The line equips the Envision with a significant amount of dimensional presence. 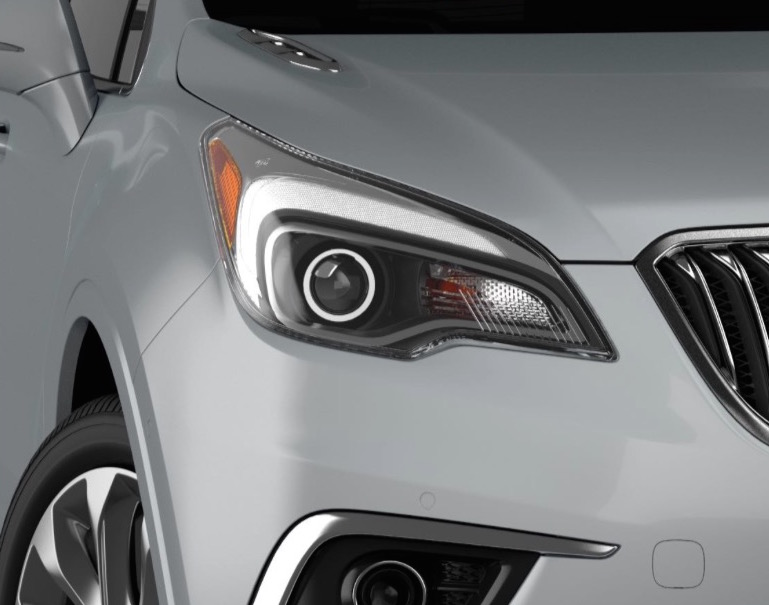 The Envision has three portholes on each side of the hood. In the past, this would have been Buick speak for a six-cylinder engine, but the Envision is powered by a turbo-charged inline four-cylinder motor (the Turbo 2.0L I4 LTG). Alas, the linear correlation between the amount of portholes and engine cylinder count is no more. But it still has three portholes, nonetheless. 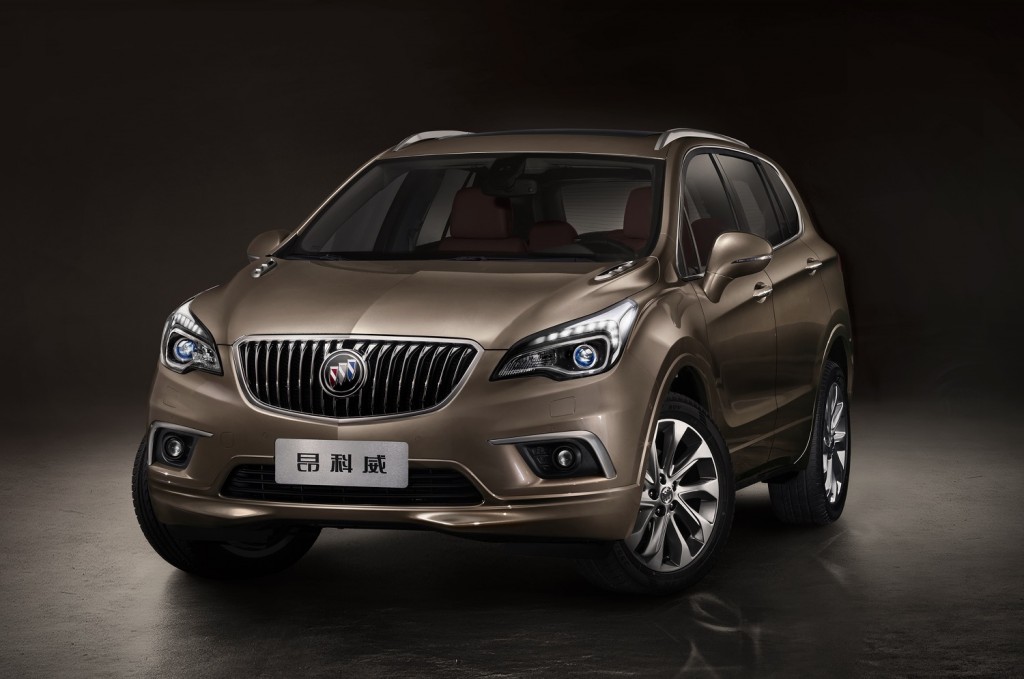 Look closely, and the door-mounted wing mirrors are large. There’s honestly no way around it. But the design works. As do the sleek turn signal indicators integrated into them. 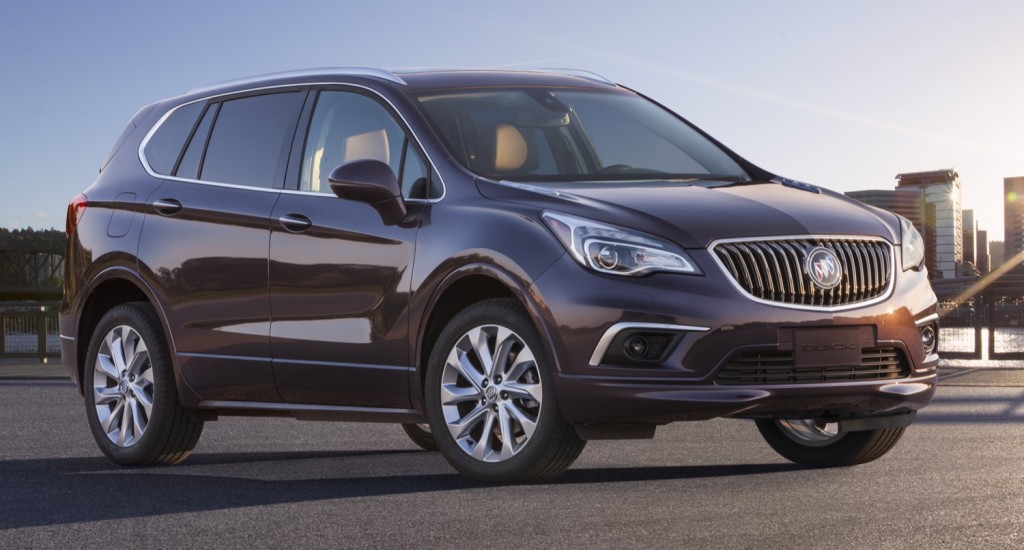 Love ’em or hate ’em, the front vanity windows — the small window immediately in front of the main front window — is a by-product of moving the wing mirrors from the A-pillars to the doors. And the trend is here to stay thanks to the ever-important necessity to squeeze every single cd of resistance from a vehicle’s body. On the Envision, those vanity windows are quite prominent, though they fit in well into the overall design. 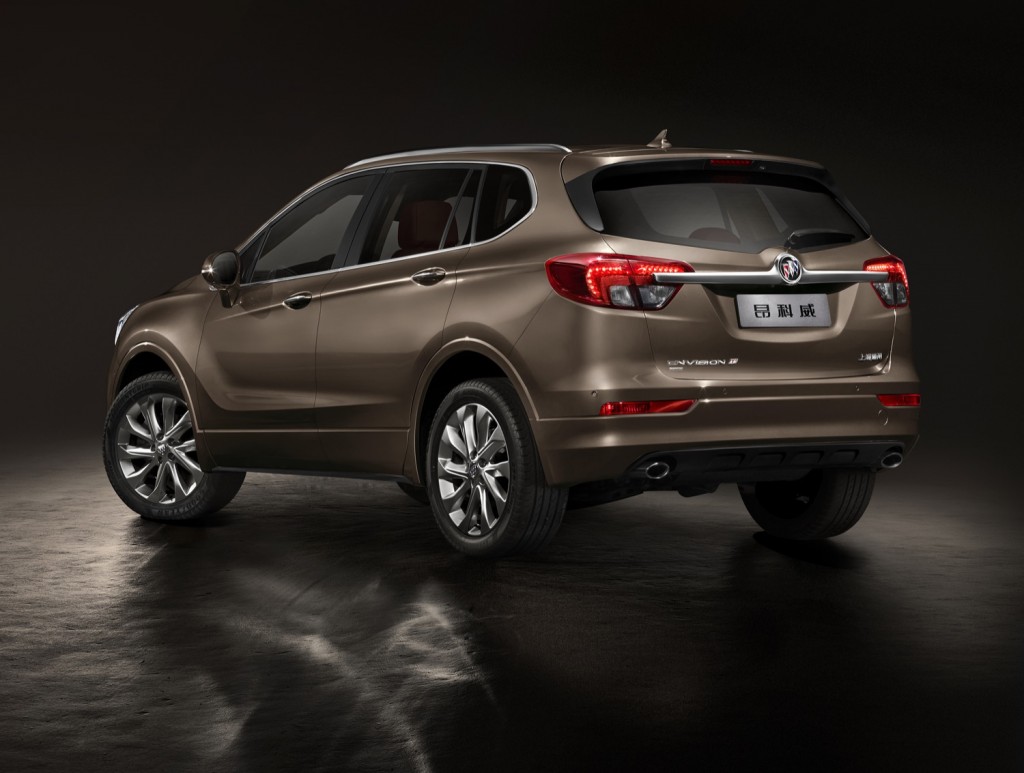 The Envision features a unique rear spoiler that integrates seamlessly into the exterior design. In fact, Buick states that it’s not just for show, but actually improves the car’s aerodynamic qualities.

In fact, look closely and you will notice that the spoiler actually wraps around the entire top portion of the liftgate. Most of the spoiler is finished in the color of the vehicle, while the outboard edge of the horizontal portion as well as the vertical pieces are black. 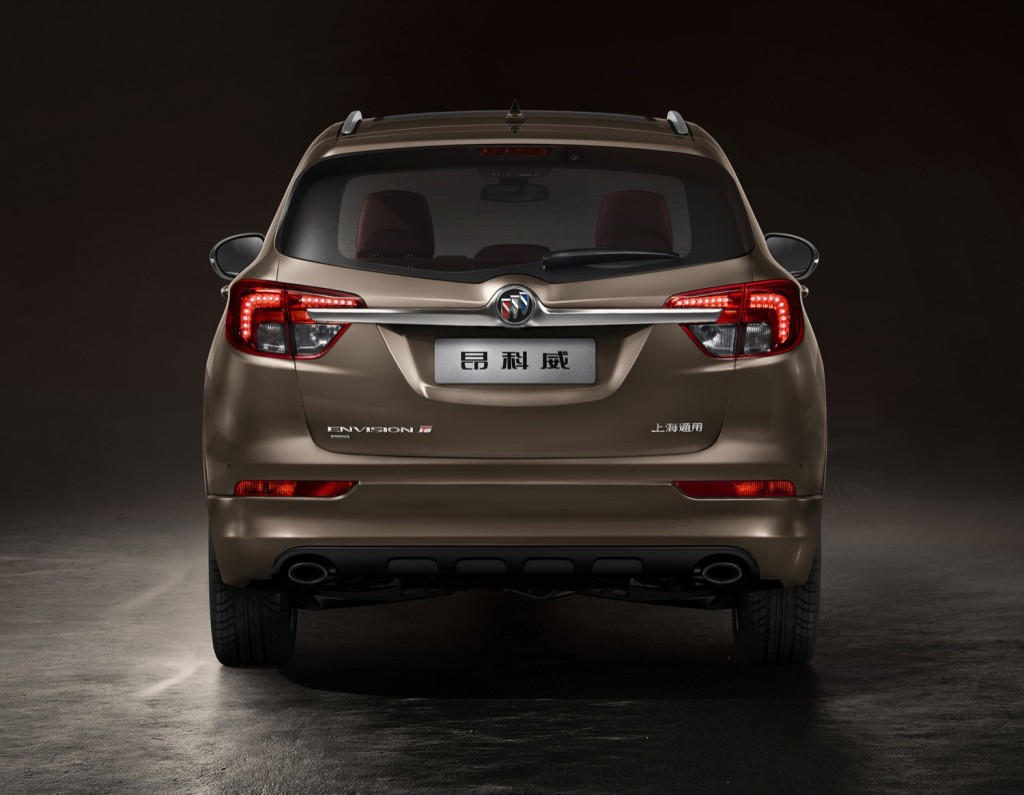 The sculpted, high-tech LED taillights extend from the edges of the lift gate and aft into the rear fenders. And just like the headlamps, the taillamps feature the Buick-Opel-Vauxhall “wing” element.

The lights are connected horizontally by a prominent chrome accent strip, a design trait that GM Authority has come to unofficially refer to as the ass-brows (trademark being contemplated). 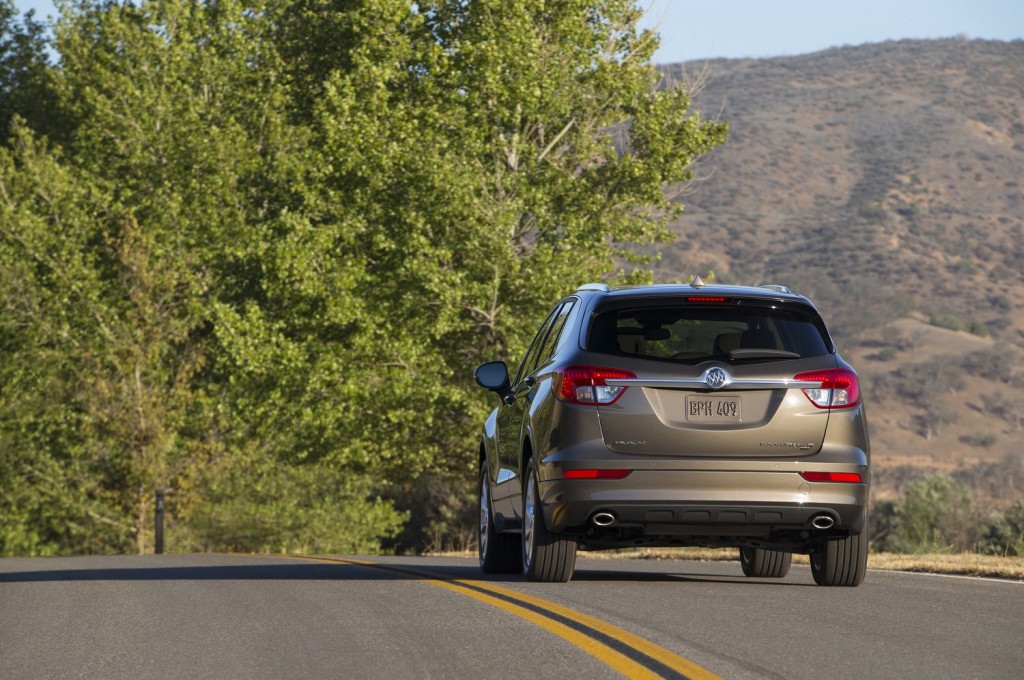 Despite the Envision cradling the boosted two-liter inline-four, it still features two chrome-tipped pipes at the rear, delivering a complete and proportionally-balanced appearance.