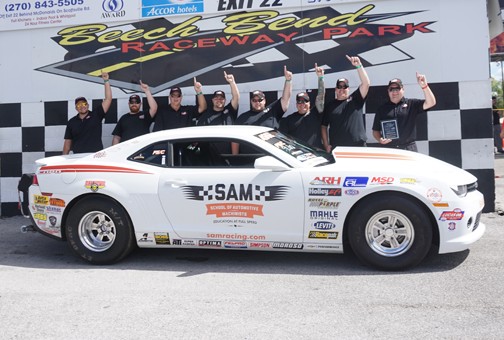 Holley LS Fest has become the largest gathering of LS-powered vehicles in the country. This year featured 671 competitors and 12,000 enthusiasts in attendance, with the COPO Camaro class being one of the most popular events. With that, Lingenfelter Performance Engineering and the School of Automotive Machinists have decided to co-sponsor the race during the 2016 Holley LS Fest. The two have supported the COPO class since its beginnings.

Titled “Battle at the Green,” next year’s COPO Camaro drag race will take place from September 9-11 2016, and the first place winner will take home a cash prize of $10,000, with $1,000 going to the runner up. Competition will be held under NHRA rules for Stock and Super Stock eliminator, with a qualified pro ladder. The COPO racers will be pitted on-site in an area reserved exclusively for them. Qualifying runs will be set for certain times during the event, and racers will compete with an all “dial in” format for eliminations – meaning no heads up racing for same class vehicles.

Mike Copeland, vice president and general manager, Lingenfelter Performance Engineering, believes that the continuation of the COPO Camaro program in 2016 will yield an increase in both participation and spectators for the event. Throw in the extra monetary incentive, and this could be the “ultimate COPO Camaro shootout for the year.”

“This is exactly what we originally envisioned for LS Fest.  We wanted to host a party and let the industry make it their own.  We are super excited that the guys at Lingenfelter and SAM came up with this idea and we can’t wait to see it unfold.  Each COPO since 2013 has come from the factory with Holley EFI and each naturally-aspirated COPO has a Holley Hi Ram intake, so it is only fitting that we spotlight the COPOs at the Holley LS Fest,” said Bill Tichenor, director of marketing, Holley Performance Products.