Cadillac is currently running an astounding lease deal on the 2016 ATS-V Sedan: for $559 per month and $4,649 down, you can lease the four door compact ultra high-performance luxury sedan.

That much gets you a “base” ATS-V — the one without any optional packages like the $2,500 Luxury Package, $5,000 Carbon Fiber Package, or the $6,195 Track Performance Package. Still, that is a lot of car for the money. In case your memory is fuzzy on the ATS-V, we should note that the compact luxury rocket features a twin-turbo 3.6L V6 LF4 engine making 464 horsepower and 445 pound feet of torque capable of propelling the car from 0-60 mph in 3.8 seconds and attaining a top speed of 189 mph, while delivering perfect weight distribution and Magnetic Ride suspension capable of eating up curves better than most supercars. It also brings plenty of stopping power thanks to very capable Brembo brakes, aggressive yet refined exterior styling, and an overall experience deserving of the “luxury” moniker. 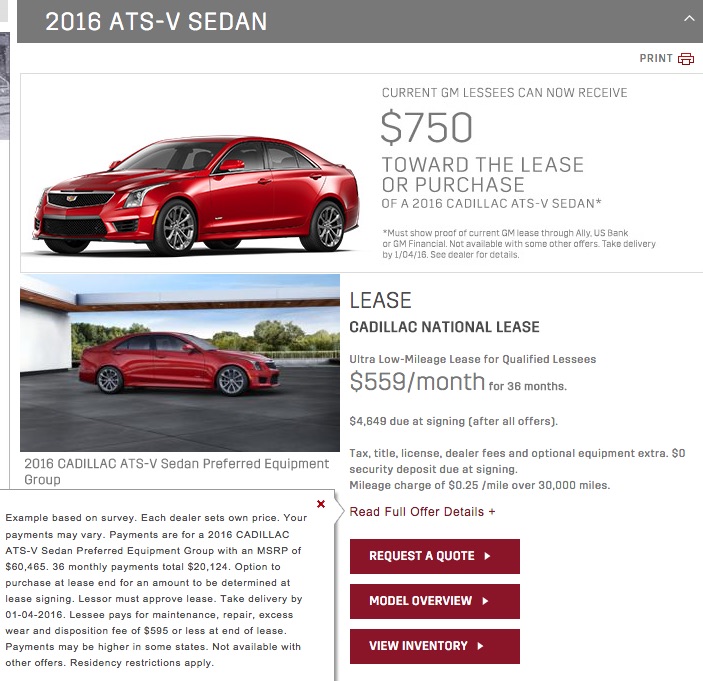 To illustrate the incredible value, we should point out the fact that a BMW 340i sedan with the (admittedly attractive) M-Sport package leases for $549 a month and $4,474 down. That’s $10 less per month for a vehicle that’s not even in the same league as the ATS-V. Instead, the 340i competes directly with the ATS 3.6, while the M3 is BMW’s rival to the ATS-V. And to lease an M3, be prepared to shell out $4,202 at signing and $777 a month thereafter.

On a total expenditures basis (combining the initial downpayment and 36 monthly payments), it will cost $24,773 to lease the ATS-V Sedan for three years, and $32,174 to lease an M3 for the same period of time. When all is said and done, the BMW is $7,401 more expensive.

Granted, the figures stated here are for low-mileage leases of 10,000 miles per year that averages out to 830 miles per month, and those who expect to drive more can always increase the amount of miles allotted in the lease for an extra fee. But the difference in price between the ATS-V and M3 is noteworthy given that a significant amount of luxury cars are leased, rather than bought (financed).

Those wondering about leasing the ATS-V Coupe should know that Cadillac doesn’t (yet) advertise an official lease program on the two-door monster, which is slightly more expensive than the ATS-V Sedan. Even so, we’re sure dealers will be able to put one together for those interested.

Update: an earlier version of this story stated that the monthly payment of the “base” M3 is $784. While this is the case, the payment can be lowered to $777 by configuring the vehicle without an extra-cost exterior color. This story was updated to reflect the lower, $777 per month payment.