The 2016 Chevrolet Malibu plays in one of the most competitive and high-selling vehicle segments (3rd largest overall) in the North American automotive market. Therefore it serves a vital role for Chevrolet and General Motors as a whole, and for its own sake, has some redeeming to do. The outgoing Chevrolet Malibu had trouble catching on in part due to its unimpressive fuel economy numbers and rear legroom relative to the segment. There’s no point in exhausting your attention span any further about the outgoing Chevy Malibu, as we have more than enough content for you to peruse through, should you ever be bored enough.

The all-new 2016 Chevrolet Malibu promises us that it would fix the transgressions of old. It does so. And in doing so, gives us the best mid-size sedan from Chevrolet we’ve ever experienced. We get 4 more inches of wheelbase, 1.3 more inches of legroom and 2.3 more inches of overall length than the previous generation Malibu. On top of it all, the 2016 Malibu is a staggering 300 lbs lighter than before. Legroom problem: solved. Ride: improved. Handling: more supple and crisp.

With the 2016 Malibu, drivers are getting a vehicle that has near-full-size space, with lithe ride and handling characteristics of vehicles a full segment below. And here’s why:

The base curb weight of the 2016 Chevrolet Malibu is listed at 3,086 lbs. The 2015 Chevrolet Cruze base curb weight is listed at 3,004 lbs. A mere 82 lbs separate a pair of vehicles that are a full 12-inches apart in overall length. When my initial impressions were that this new ‘Bu drives like a vehicle much smaller than it actually is, this is the reason. The 2016 Malibu is the lightest vehicle in its segment as it stands.

As far as the powertrains go, they’re decent. Not mind-blowing for the class, but should satisfy the majority of consumers. A new 160 hp, 184 lb-ft 1.5L turbocharged EcoTec engine serves as the base powertrain, providing sufficient punch off the line thanks to 17 psi of boost, and on paper returns 27 mpg city, and 37 mpg highway with a new six-speed automatic transmission, with 31 mpg combined. The fuel economy numbers rated by EPA tie the base Honda Accord with its naturally aspirated 2.4L VTEC engine and continuously variable transmission. The Nissan Altima has higher highway fuel economy numbers on paper (39 mpg) but the Malibu ties it with combined mileage. Even so, the aggressive pricing of the 2016 Malibu may help persuade some undecided buyers, with a starting MSRP of $22,500. To see how that measures up to others in the segment, see the chart below. 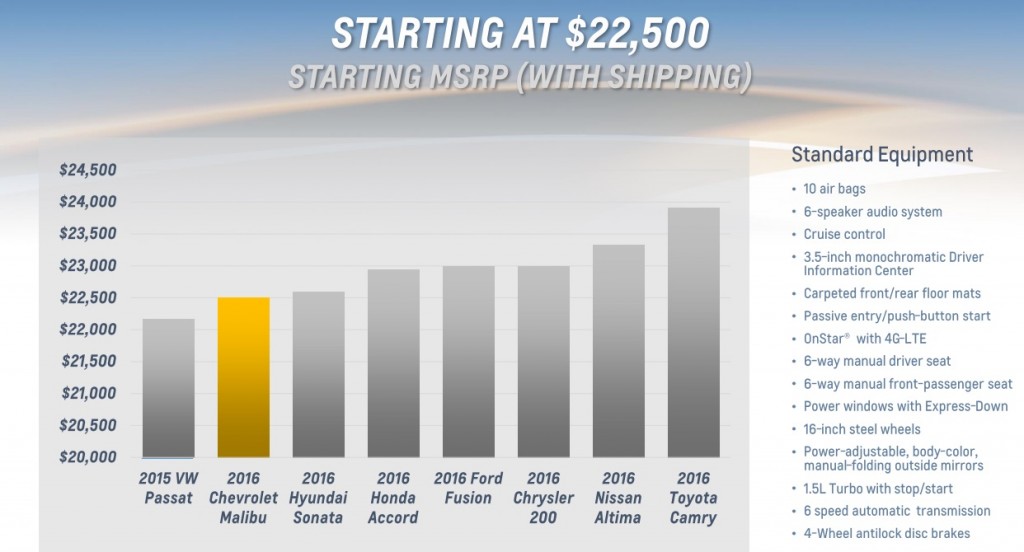 The 2016 Malibu 2.0L Turbo LTG makes things more interesting, with 250 horsepower and 258 pound-feet of torque. Not the most powerful in the segment, but there is something to be said about the weight savings in relation to the heavier, more powerful V6 offerings such as the Honda Accord V6 and Toyota Camry V6. The behavior of the little engine is optimized at speeds below 70 mph. Passing maneuvers at speeds beyond that require noticeably more distance and timing. Such is the nature of little engines with little turbos. Additionally, the quiet ride that’s come to be expected from Chevrolet remains present and accounted for.

How about the design? Well, how about it? Most of the GM Authority army seems to take a liking to its looks, and we do as well. The overall design will also be one of the main reasons the 2016 Malibu moves or sits, more than specific engine output, that’s for sure. To us, it has a unique look from the rest of the segment, and is distinctively Chevrolet.

If the powertrains, fuel economy and design of the 2016 Chevrolet Malibu won’t make it appealing to the 2 million annual buyers of the midsize sedan segment there is another element. Technology. This is perhaps where the new ‘Bu stands out more than anywhere else. Features like OnStar 4G LTE, Apple CarPlay (and sooner-or-later, Android Auto), and an industry-first Teen Driver Mode. As drivers look for more connectivity and safety in their vehicles, all of these unique selling points could act as beacons for consumers to congregate to their nearest Chevy dealer for a closer look. But it won’t be that easy.

The marketing and advertising teams now have to figure out how to promote these features and penetrate through the clutter. The message needs to reach consumers that would otherwise opt for the leading Accord or Camry — perhaps the biggest hurdle in front of the 2016 Malibu. Time will tell if they can deliver.