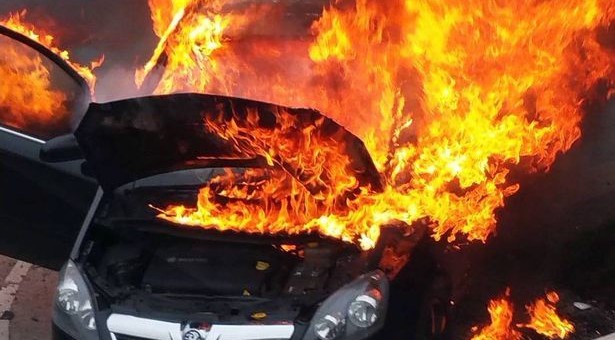 Paula Compton was driving in her Vauxhall Zafira with her three children when she noticed the glove box begin to “glow.” The next thing she knew, smoke was bellowing from the car, so she stopped and managed to get her kids out of the car before it was completely engulfed in flames. She’s shocked, but feels lucky to be safe and sound with her children. That is, until she finds out her insurance provider has doubled her premium due to the incident – like any of us here would be, she’s pissed.

We cannot speculate on whether or not Paula is a devious insurance-fraud-professional-scammer who set her own car ablaze with her children in it, but we do know that this is just one of nearly 200 reports of second-hand Zafiras catching fire. Despite this, her insurance has risen from £200 to £497, which compounds the cost of the £500 deductible that was subtracted from their settlement of £3,500. (We also don’t think anyone would go through this trouble for such a small sum of money, but we digress)

The cost of insurance is partly covered by Paula’s father-in-law, who called the insurance company to find out why there was such a hefty increase. The provider told him that cost rose because “no one else was involved.”

According to this report, Vauxhall believes the fires are due to cheap fixes to the heating system, but has not yet discovered an exact cause. For the time being, Vauxhall’s urges those with similar incidences to report the fire to the Driver and Vehicle Standards Agency, and keep documentation including photographic evidence, a written account, and all correspondence with Vauxhall and their insurer.