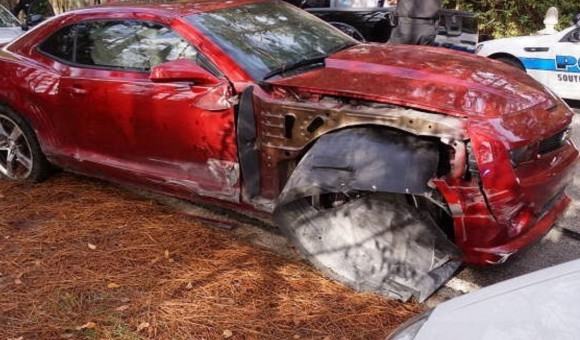 Michael Gregg Wall is facing charges of driving while impaired, fleeing/eluding arrest in and with a motor vehicle, two counts of hit-and-run, failing to stop for a blue light and siren, reckless driving, driving the wrong way on a dual-lane highway and speeding 135 mph in a 55 mph zone after attempting to evade the North Carolina State Highway Patrol and Southern Pines Police Department in a Chevrolet Camaro on Sunday afternoon.

According to reports, Wall was originally pulled over by the Southern Pines Police for speeding when he decided to take them on a wild goose chase. The ensuing chase lasted several miles, went against opposing traffic, and reached speeds of 135 miles per hour.

Any chances Wall had of escaping were lost when the front passenger side tire of the fifth-gen Camaro he was driving went flat. But that merely slowed him down. The chase finally came to an end when Sgt. Stahl of the N.C. Highway Patrol implemented a PIT maneuver with his Dodge Charger police cruiser, bringing the Chevrolet coupe to a halt.

A PIT, or Precision Immobilization Technique, is a pursuit tactic by which a pursuing car can force a fleeing car to abruptly turn sideways, causing the driver to lose control and stop. The move essentially involves pushing out the fleeing vehicle’s rear end to one side, thereby causing it to slide. Fortunately no one was injured during the chase, though Wall did make contact with another vehicle.

He was taken to the Moore County Detention Center and is currently held there, with bail set at $12,500.