When Mike McLellan decided to use as many New Old Stock (NOS) parts as he could for his 1973 Camaro RS/Z28 project, he made a commitment that was at times difficult to keep. The responsibility meant that Mike was looking at it as much more than a resto/mod project; it was a labor of love, a love that’s evident in the attention to the finest details in all aspects of the build.

Let’s go on a journey to find out what this labor of love entailed.

In this usage NOS, doesn’t mean Nitrous Oxide Systems but rather New Old Stock; some also use it to mean New Off the Shelf, or New Obsolete Stock. Basically it’s parts that may be new in the original packaging (usually), but are obsolete and no longer in production. Although the packaging may have been damaged over the years or the parts may have suffered some deterioration, they are still in usable condition. 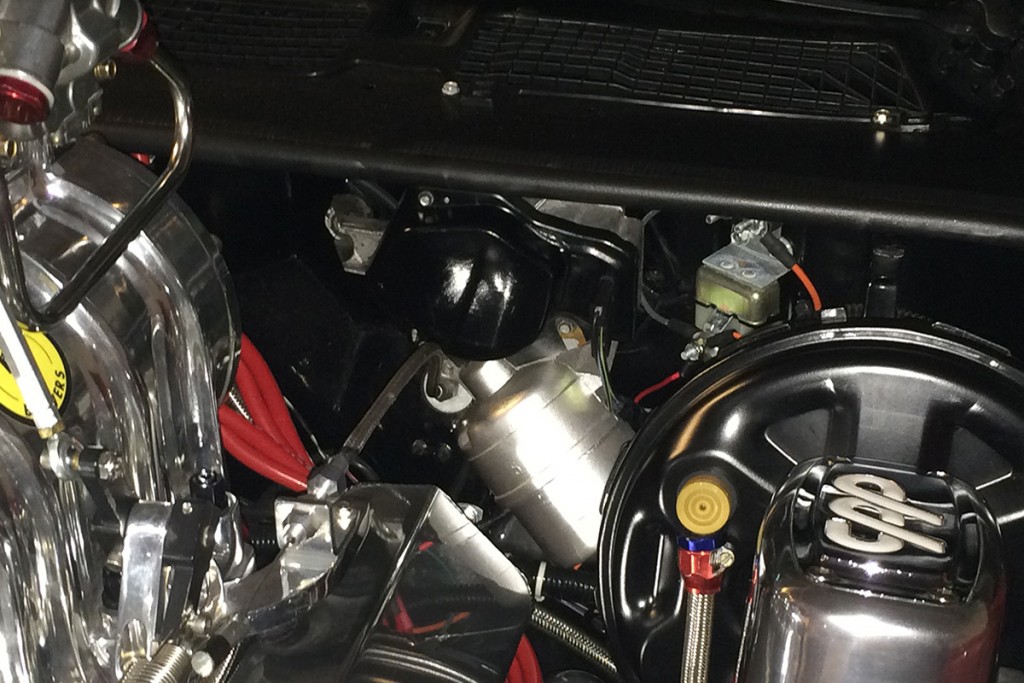 This picture doesn’t allow the detail to be seen that differentiates this NOS wiper motor from replicas or other aftermarket parts.

NOS parts are used to help retain or enhance a car’s value and to make the car more attractive to judges on the show circuit. They are the OEM (Original Equipment Manufacturer) parts; however they’re usually no longer available through standard channels; you can’t just hop over to your dealer or favorite parts outlet and pick them up. Instead, one must hunt for them, sometimes for weeks.

Mike tells us it took him several years to find and acquire the NOS parts that he installed on this project. He was able to find the parts because he was looking for parts for a fairly popular model and a pretty popular year of the model. Finding NOS parts for older, less popular cars, less popular model years, and even options packages of generally popular cars is often more difficult. And when parts are found, a smaller variety is usually available. 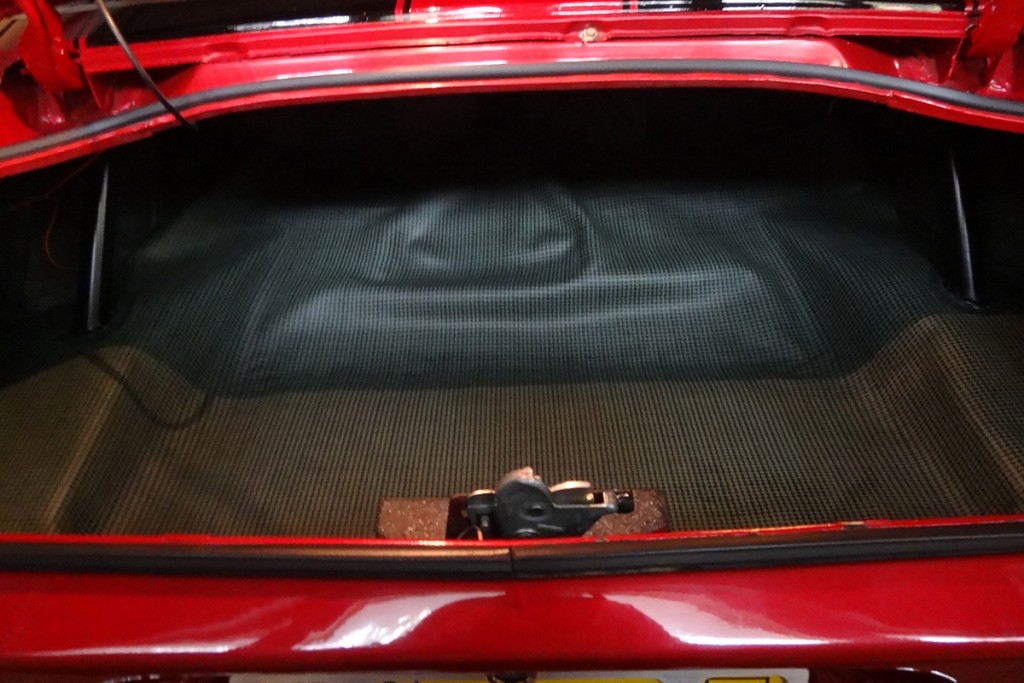 The trunk liner insert is another excellent example of hard-to-find NOS parts.

When McLellan bought the car a number of years ago, it was a finished project according to the previous owner. In fact, the paint and body you see in the pictures below were the work of the previous owner. What Mike did was completely disassemble the car, clean everything up, remove the engine that was in it and install a new SBC, and then find and install as many NOS parts as he was able to find over the life of the project, which was a little more than two years.

“In a picture, it’s hard to tell repro from NOS, but in real life you often can”, he says. This is why he went with NOS instead of replica parts. 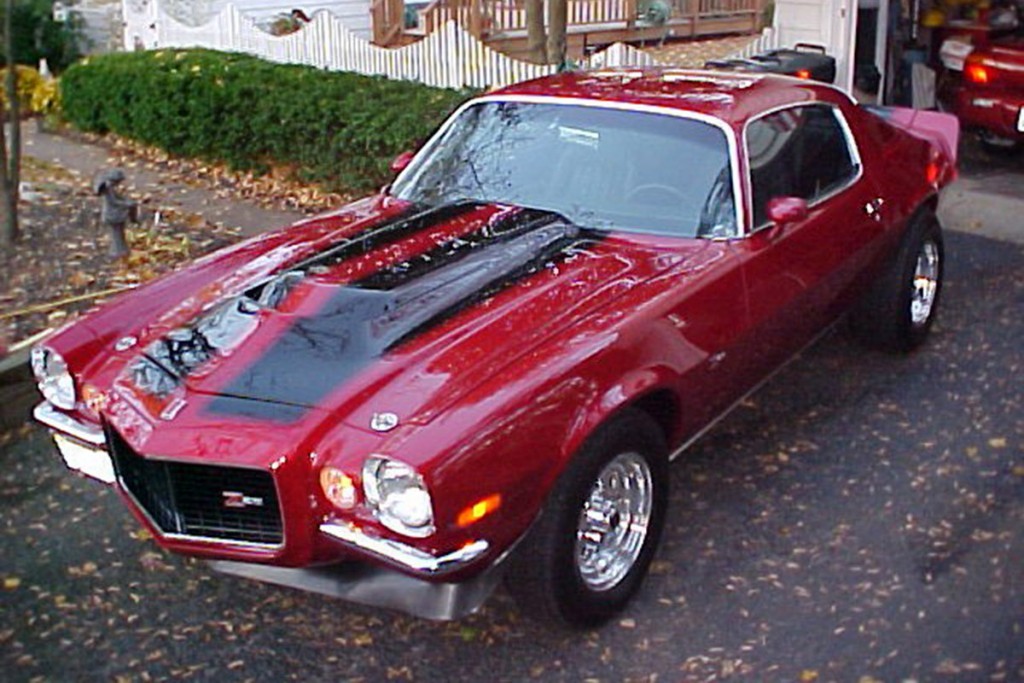 This is how the car looked when Mike bought it.

His reasoning was simple: using NOS parts would increase both the attractiveness factor of the car to show judges as well as to buyers if he decided to sell it.

Most of the dash was removed and replaced with NOS parts, including the dash panel itself, the switches, and the console. Take a close look and you’ll also notice that the seatbelts are the original 1973 parts. In fact, McLellan informs us that except for the roll bar and a couple other things, the interior can almost be considered “original equipment.” 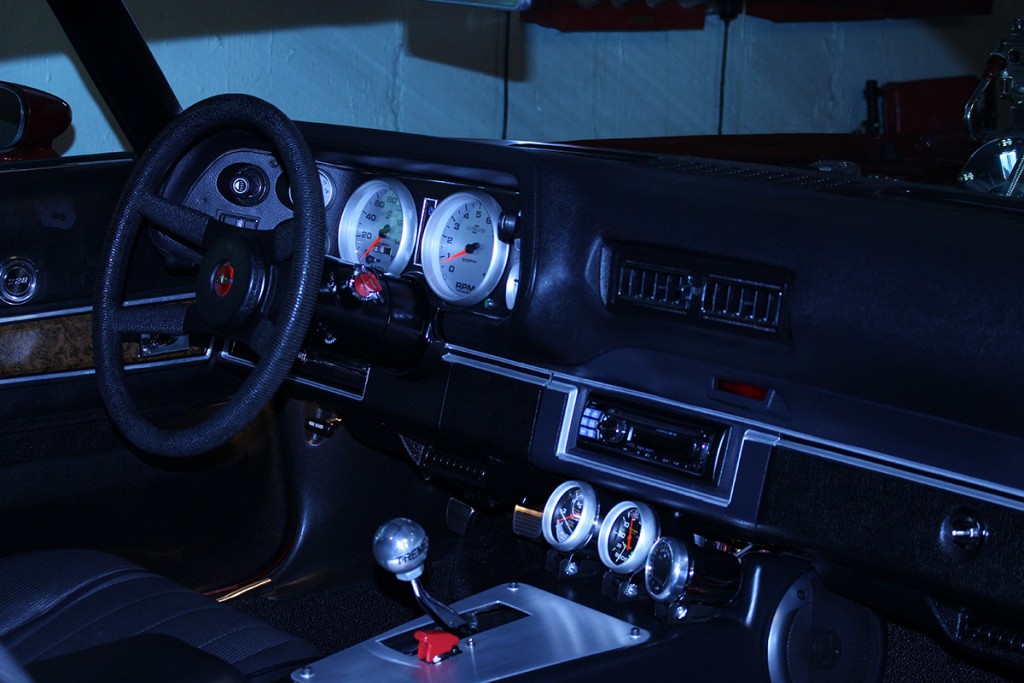 As many of the OEM switches, knobs, heater controls, and air vents as possible are original or NOS parts.

He didn’t settle for AC vents, heater controls, or even the intermediate steering shaft that “fit.” If they weren’t exactly the same part number, he went out and found the exact parts that were installed on 73 Camaros from the factory. Where possible, everything had to be as original to a 1973 Camaro as possible. Everything but the engine, that is. 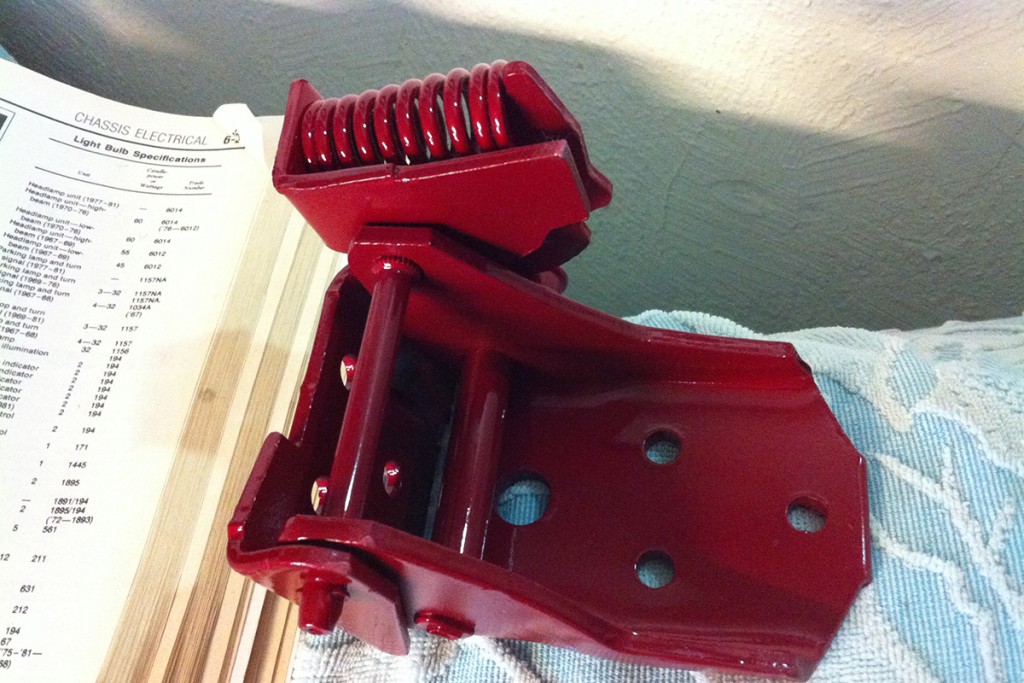 Mike also restored some of the original parts on the car.

Who Else Was Involved? 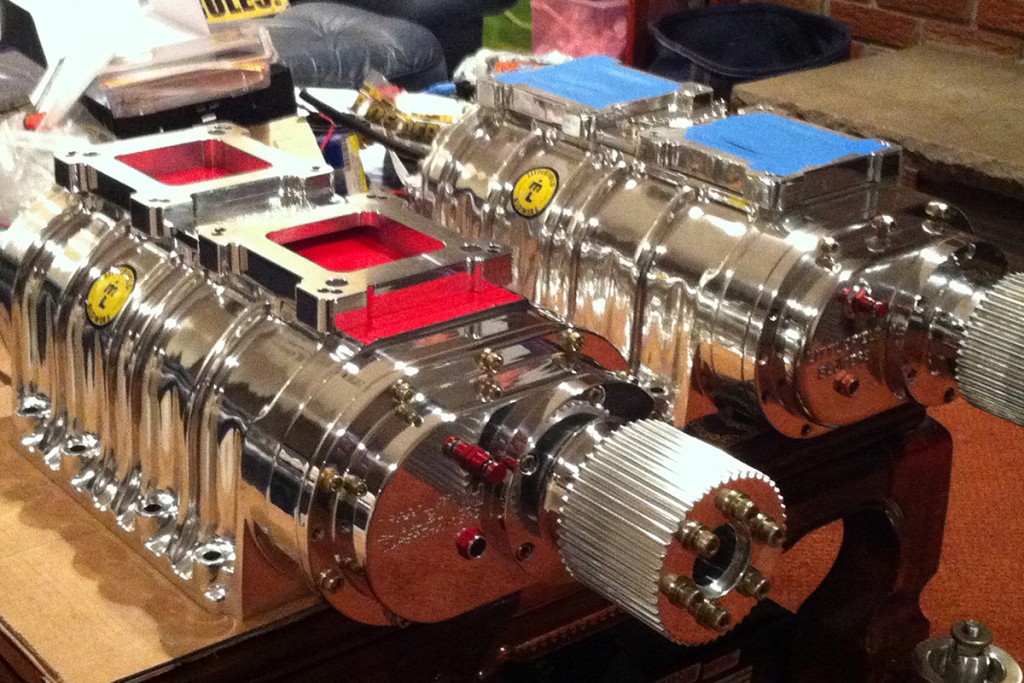 Many hot rodders don’t have either the time or the patience to invest in a fairly time-consuming and extensive project like this. To be honest, what person that doesn’t do this for a living does?

Hence the reason for the length and timeframe of the project. As mentioned above, finding the correct NOS parts takes time, which many hot rodders simply don’t want to take. “If it fits and looks close, use it” is the general attitude. 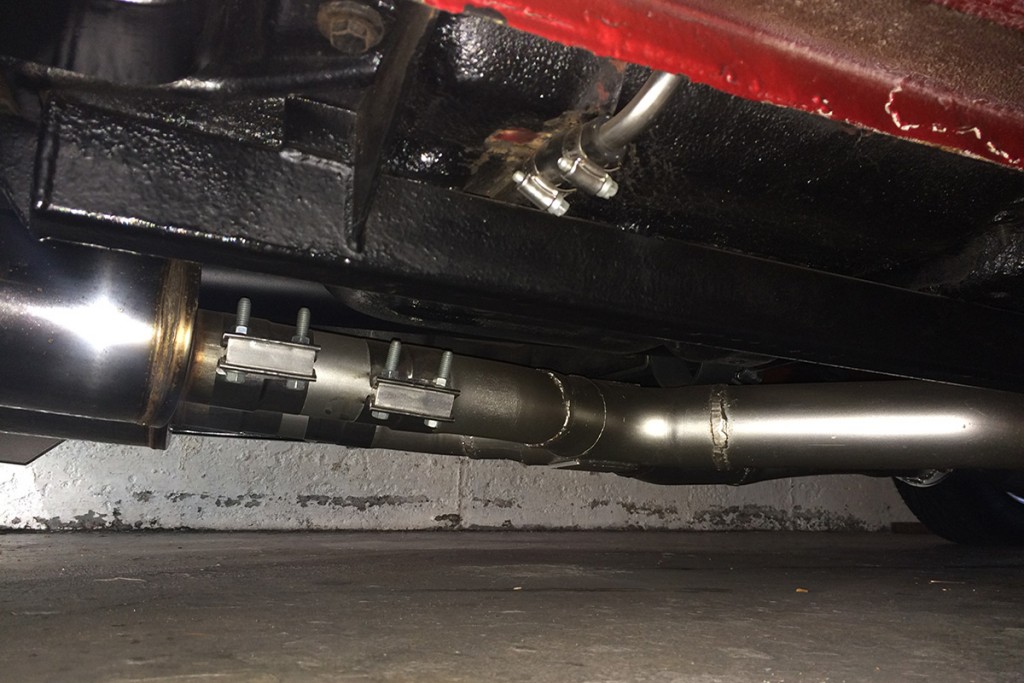 Another reason for the project taking several years to complete is that nothing was farmed out. McLellan built the engine and then tuned it, all by himself. If there was something that needed to be welded, he broke out the welder and did it himself. He may have had a few helpers here and there who lent a hand, like helping to squeeze the engine into the engine bay, but the car never left his possession for anything. 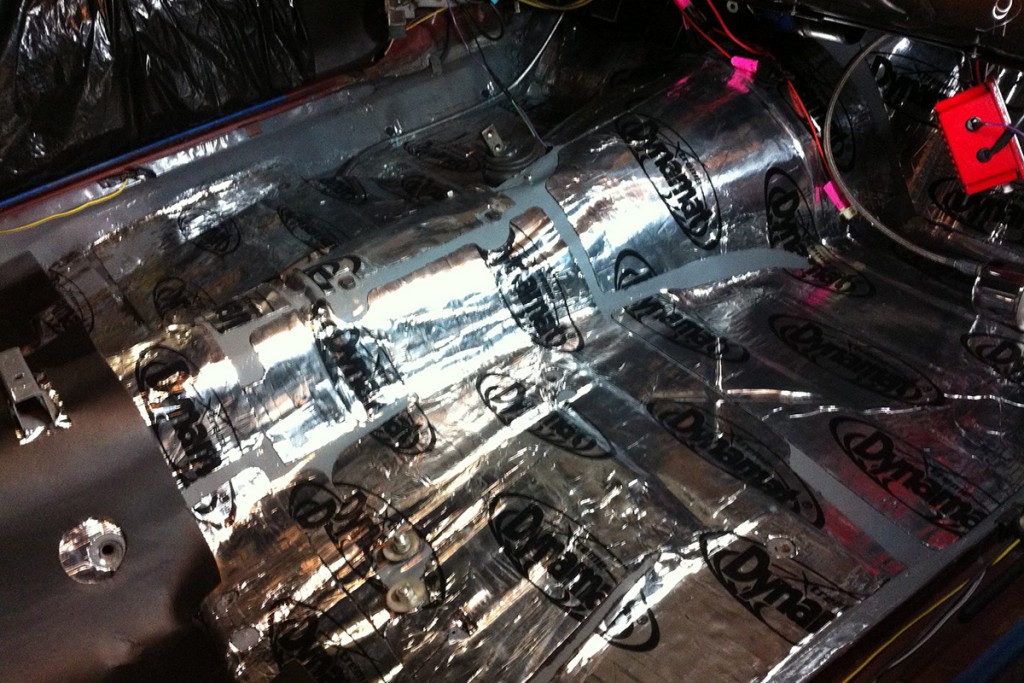 Mike installed Dynamat to keep exterior noise from interfering the sound of the engine or the audio system.

Since he bought the car “already finished” from the previous owner, he didn’t need to paint or repaint anything. He admits that he did have to rely on someone else for the dyno testing, though. Those machines are expensive.

The Goodies Of The 401 Cubic Inch Engine 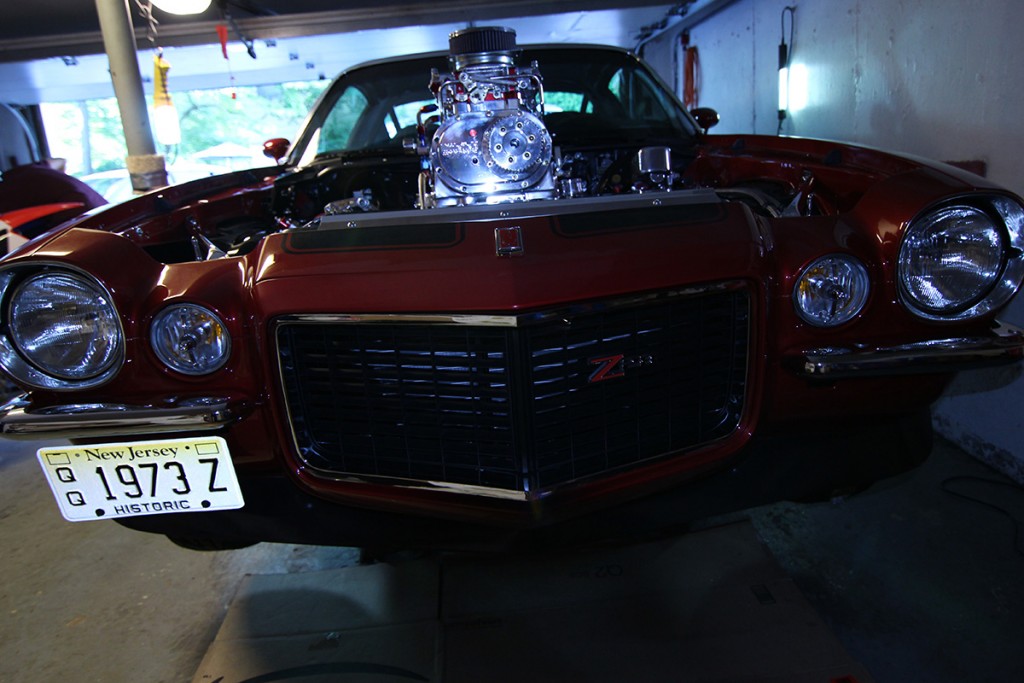 The engine displaces 401 CID and is a supercharged Small Block Chevy piece with a number of special goodies inside it, starting with the block itself: a Dart Little M Sportsman SBC unit that combines a 4.125 inch bore with 400 mains to displace 401 cubic inches. Pushing fresh air through the engine is a Littlefield 8-71 blower running at 14 PSI of boost. Sitting up top are twin Quick Fuel Technologies 750 CFM double pumper carbs that are designed for use with blowers. 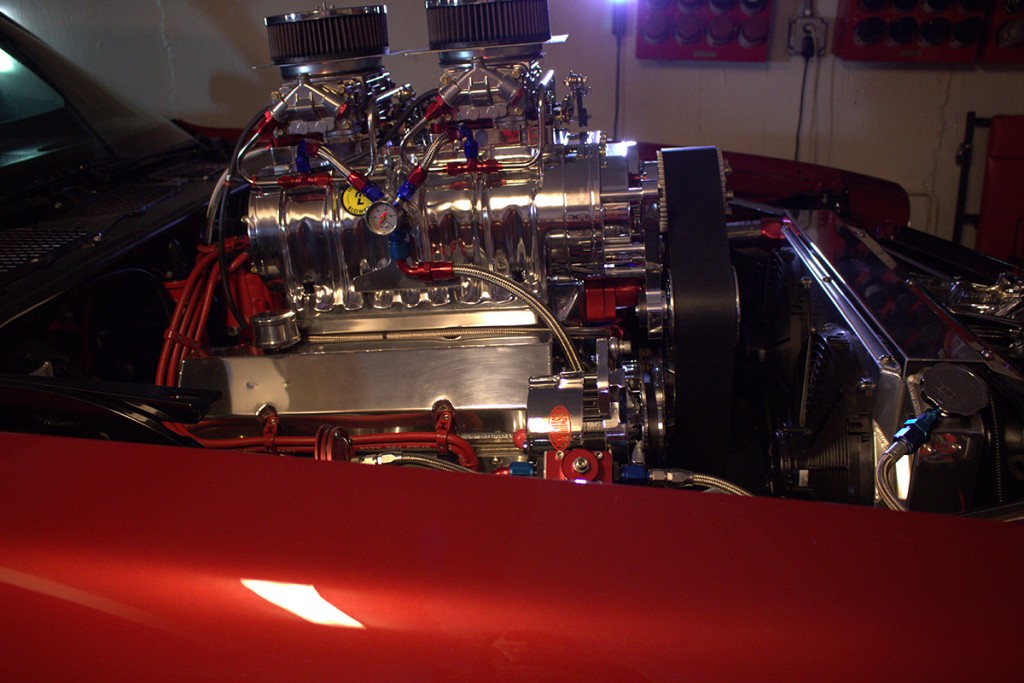 Everything possible on the 770 HP/427 CID engine is chromed and highly polished.

Backing Up the 770+ Horsepower Engine

Obviously when you’ve got more than 770 ponies galloping under the hood, you’re going to need some serious backup. To transfer all that power to the rear, McLellan installed a Tremec TKO 500 five-speed manual transmission with a McLeod RXT Twin Disk Clutch set capable of handling 1200 horses.

Putting the power to the wheels is Moser Racing 12-bolt differential with an Eaton Posi diff with 33-spline forged axles and C-clip eliminators, running 3.42 gears. “Whoativation” comes in the form of a Wilwood Big Brake kit with DynaPro six-piston calipers and 12.2-inch rotors. 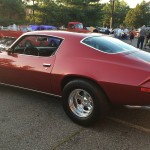 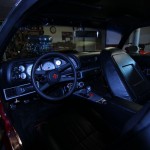 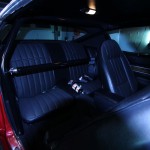 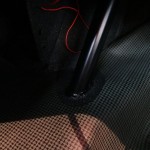 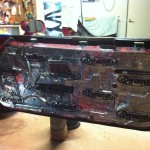 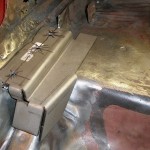 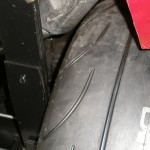 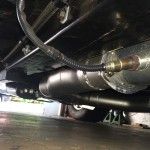 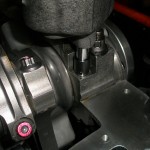 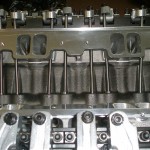 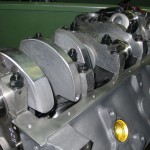 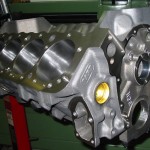