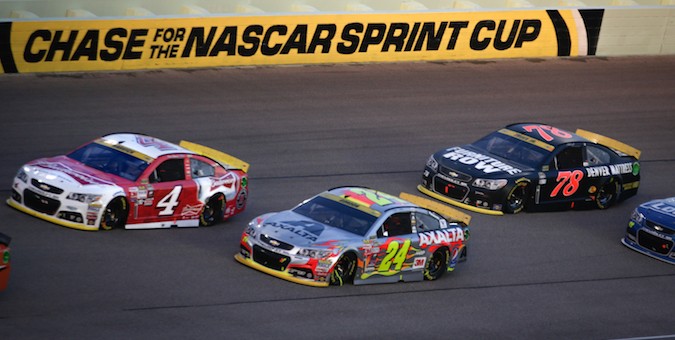 Busch looked strong from the green flag, running near the front of the pack all race after qualifying third. Crowd favorite Jeff Gordon, racing in his last-ever Sprint Cup Series race, was able to move past the Joe Gibbs Racing driver following a Lap 36 restart to take the lead, however Harvick soon moved into the top spot following a second restart on Lap 45.

A multi-car accident involving Dale Earnhardt Jr., Clint Bowyer, Aric Almirola and David Ragan brought the yellow flag out once again soon after Harvick claimed the lead position, but it was far from the only time the Team Chevy driver would challenge for the win. A Lap 261 restart saw Busch lineup on the front row next to Team Penske’s Brad Keselowski and ahead of Harvick – who Busch desperately needed to keep at bay.

“I knew I just had to protect whatever Harvick tried to do if he was going to shoot the middle or shoot the gap or whatever it was going to be,” Busch told NASCAR.com post-race.

“I don’t know if Brad spun his tires or what. We got to Turns 1 and 2 and we were pretty even; I just looked into (Turn) 4 and gave it everything I had those last seven or eight laps.”

It was a long and bumpy road for Busch on the way to his first Sprint Cup championship. The Toyota driver missed 11 races earlier this year after breaking his leg in an XFINITY Series crash at Daytona and rallied to lock in a spot in the 16-driver Chase playoff. He described his first championship as a “dream come true.”

“I just can’t believe with everything that happened this year and all the turmoil, all the things that I went through, that my wife (Samantha) went through and the people that are around me went through,” Busch said. “This championship is all for these guys, my wife, my family, everyone who has had to sacrifice so much to get me here to this place today, whether it was on my team right now, or on my teams in the past.”

Gordon turned up sixth in his last-ever race behind the wheel of the No. 24 Chevrolet, while Martin Truex Jr., who had struggled with a poor handling car for much of the race, finished outside the top ten in 12th. As always, the NASCAR Sprint Cup Series will return in February with the Sprint Unlimited race at Daytona. In the meantime, you may view full results from Homestead-Miami at this link.