Chevrolet launched its carbon-reduction initiative five years ago, coinciding with the launch of the first-generation Volt, and has remained committed to reducing its carbon emissions since.

The brand is happy to report it has met its community-based goal, keeping 8 million metric tons of carbon dioxide from entering the atmosphere.

“Chevrolet launched this carbon-reduction initiative in 2010 when we debuted the Volt to demonstrate our commitment to a clean energy future,” said Alan Batey, General Motors North America president and Global Chevrolet brand chief. “Since then, our Volt customers have driven 700 million electric miles and renewable energy is powering nearly a tenth of our company’s U.S. energy consumption. 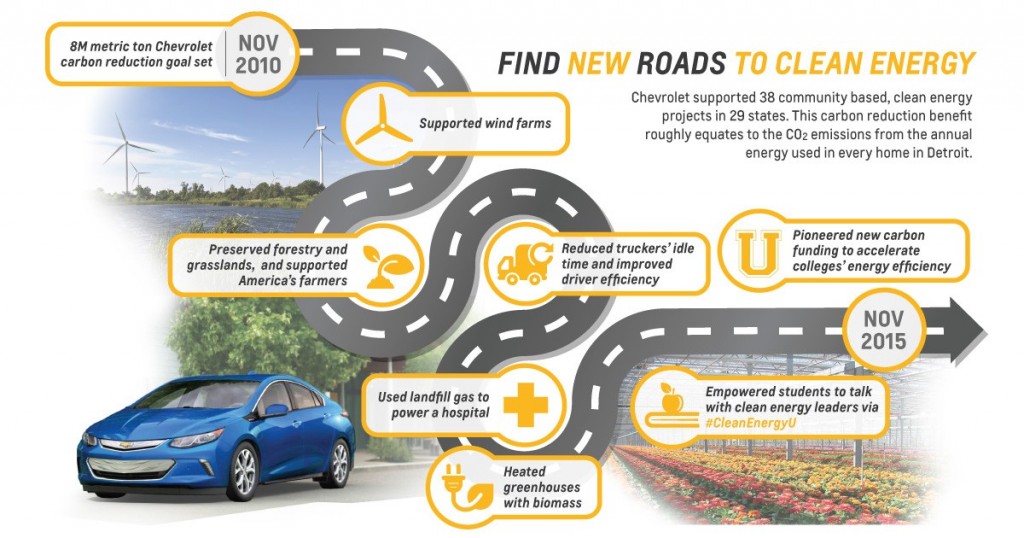 Chevrolet has collaborated with hundreds of climate stakeholders to support carbon-reduction projects in 29 states. The brand itself has even retired its carbon credits to benefit climate, instead of using them to offset its own vehicles and operations.

“I don’t think I will see again in my professional lifetime the kind of leadership – the sheer scale, the investment, commitments, diversity of team – that Chevrolet pioneered with its carbon-reduction initiative,” said Bob Sheppard, corporate sustainability consultant and advisor to the Chevrolet program.

Chevrolet has invested itself in creating long-term support for clean-energy projects and has expanded the carbon market by pioneering new methodologies enabling college campuses to draw on carbon credits from the voluntary carbon market to help further their large-scale energy efficiency efforts.