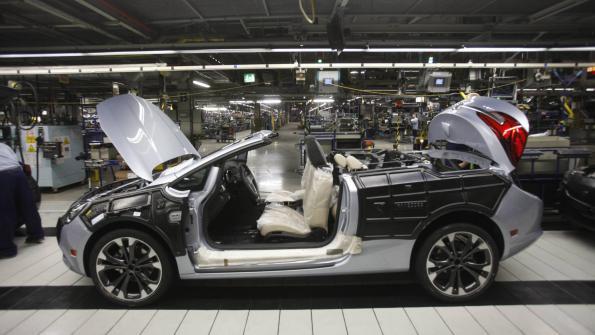 Production of the Buick Cascada has commenced at the GM-Opel production plant in Gliwice, Poland.

The compact soft-top convertible will be the facility’s first vehicle earmarked for export to the United States since it opened it first opened its doors in 1998. The plans began volume production of the Opel/Vauxhall Cascada in February of 2013, with output of the Aussie-market Holden Cascada commencing two years later in February 2015.

The Gliwice plant also produces the Opel/Vauxhall Astra as well as the Australian-bound Holden Astra. The Cascada is built on the same assembly line as the Astra models, but leaves the main line for installation of components specific to the convertible, such as the soft top.

In 2014, the plant produced about 89,000 vehicles. That figure is expected to climb as high as 160,000 in 2015 thanks to healthy demand for the new Astra K as well as production for new export markets of North America and Australia. By 2016, the plant is expected to be operating at 90 percent of its maximum capacity, which is approximately 207,000 vehicles in three shifts.

With 5,000 dealer orders already in the books, many are anticipating the arrival of the 2016 Buick Cascada. And though the vehicle, which is built on GM’s Delta II platform, isn’t likely to post huge sales figures for Buick, it will fill a niche market with just a single competitor.