Recently, Michigan-native, Kid Rock, paid a visit to the Chevrolet Silverado HD factory in Flint, and met with members of the UAW Local 598. Those same people would eventually build one single 2016 Silverado 3500 HD for Kid Rock himself, where he would then begin to transform it into what you see here with the help of Chevrolet’s design studio.

The 2016 Chevrolet Silverado 3500 is described by the brand as a “dually that celebrates freedom and honors American workers.”

“The Flint plant – and everyone on the line – is the backbone of America,” said Kid Rock. “I wanted the design for the truck to be bold, but with features and elements that wouldn’t be out of reach for working-class guys.” 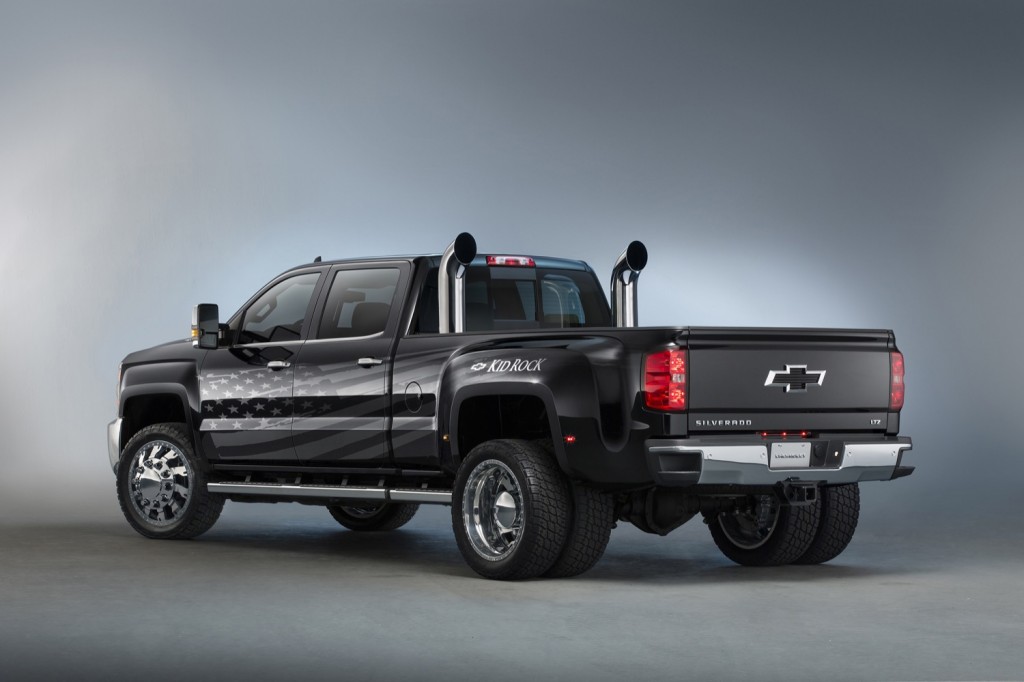 With this inspiration in mind, the 2016 Silverado 3500 Kid Rock concept includes a custom chrome grille with the Born Free logo and an enlarged Chevy Bowtie emblem, chrome exhaust stacks and patriotic graphics that flow across the body sides.

“With Kid Rock’s input, we came up with a chrome-like silver-metallic design that conveys an industrial, made-in-Detroit aesthetic that totally complements the other bold elements of the truck,” said Todd Parker, design director, Chevrolet Accessories.

Further honing in on Kid Rock’s creativity is the interior, which features Sky Cool Gray leather seating with metallic-appearing inserts patterned after acid-wash jeans. “Made in Detroit” logos appear on the door sills, and has also been stamped across And, of course, it wouldn’t be a Kid Rock concept without a kickin’ sound system, which has been supplied by Kicker.

The 2016 Silverado Kid Rock Concept will appear alongside a handful of other Silverado concepts, including the Silverado Red Line, Silverado Special Ops and a host of other bowtie-branded vehicles.