Chevrolet has released fuel economy figures for the 2016 Chevrolet Camaro in six- and eight-cylinder engine configurations. Let’s start with the 3.6L V6.

The optional 3.6L V6 LGX engine is rated at 18 mpg city and 27 mpg highway when mated to the six-speed manual transmission.

The numbers are 1 mpg more in the city and (surprisingly) 1 mpg less on the highway compared to the outgoing fifth-gen Camaro and its 3.6L V6 LFX engine. Chevy has yet to release fuel economy figures for the 2016 Camaro with the 3.6L V6 LGX paired with the automatic transmission.

That is a jump of 2 mpg in the city and 4 on the highway, while also making more power than its predecessor. And that’s not to mention that the V8-powered 2016 Camaro SS also attains 1 mpg higher fuel economy than the manual-tranny 2016 Camaro V6 on the highway and only get 1 mpg less in the city.

But the story isn’t as good for the 6.2L LT1 with the 6-speed manual: the 2016 Camaro SS is rated at 15 mpg city and 25 mpg highway. That is only a 1 mpg improvement on the highway compared to the 24 mpg seen on the fifth-gen Camaro SS with a manual gearbox, while the city rating stay the same.

GM has not yet released fuel economy figures for the new-to-Camaro 2.0L Turbo I4 LTG engine. 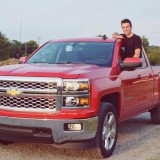