Craig Poust goes by the nickname of Just InSane for a number of reasons. However, the main reason happens to be his LS engine swaps. For instance, he swapped out the original engine in a 1983 Porsche 944 and stuck a 5.3-liter aluminum block engine into it. When Craig does an LS swap with a car, unlike most others I’ve heard about, he doesn’t go out and buy a new engine/block and drop it in. Nope. Let’s take a look at this proclivity of his, shall we? After that, Craig and I will walk you through the major aspects of this build.

Craig will get a call: “Hey dude, I’ve got a car you might like sticking an LS engine into for your shop.” (LS swaps and tech support is his “day job.”) So, off he goes to acquire the car. Then a local junkyard will give him a call: “Hey Craig, we’ve got a “insert LS-equipped vehicle model here” that just came in and the engine still runs. Do you want it?” So, off he goes again to acquire the engine.

These are all stock engines when he acquires them. Usually, they’re also high mileage stock engines. See, Craig goes against what has been automotive engine building industry “common sense” for as long as I can remember: “Grab a junkyard engine with more than 80k miles on it you need to completely rebuild it before sticking it in your hot rod.” The 5.3 LS he stuck in the 944? Yeah, it had over 140 THOUSAND miles on it when he pulled it and brought it to his shop. That’s 140 with three zeroes my friends. The only aftermarket component on the bottom end of this engine is a Holley oil pan because the stock one wouldn’t fit.

The first iteration of the build included a 76 mm turbo from his company JS Racing Products. He stuck an “almost stock” TH400 transmission by CK Performance in it with a 3500 stall torque converter from PTC-Performance Torque Converters. 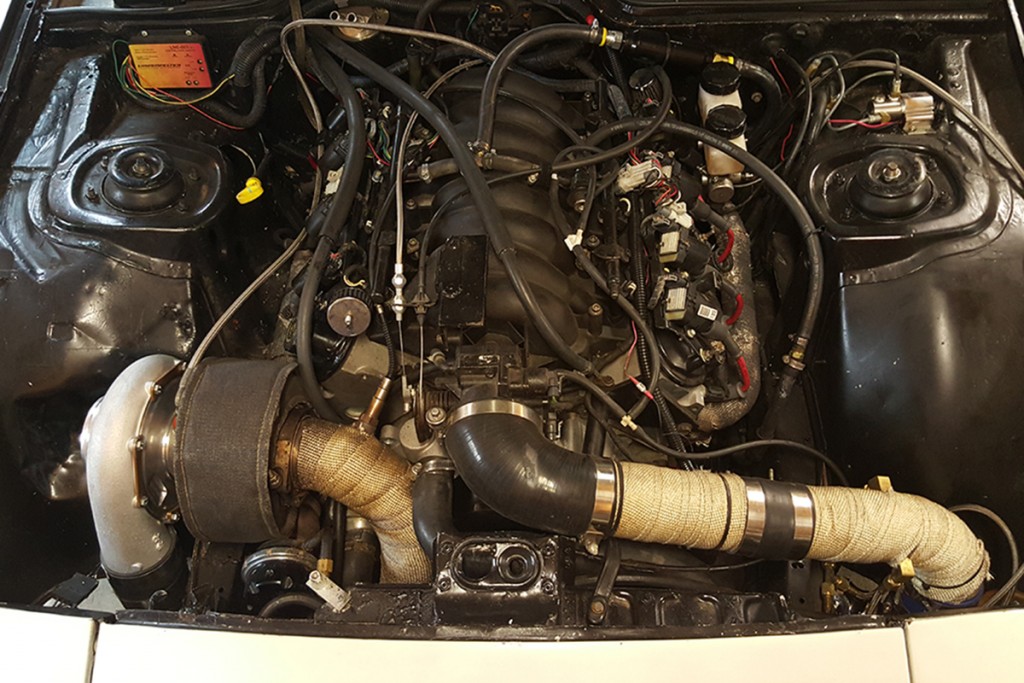 Out back he installed a Ford 8.8 inch rear from a 95 Mustang with 3.27 gears with Spartan locker and 31-spline Moser axle. He’s got Mickey Thompson 275-60-15 drag radials underneath it. Running the turbo at 12 PSI of boost, he turned a 9.98 second quarter mile pass.

Craig builds race cars that can sometimes be run on the street, so his next step was to give Julio over at Alky Control a call and order up a methanol/alcohol control kit from him. At the track, Craig changed the tune so the wastegate doesn’t pop until the turbo hits 20 PSI of boost. With that setup he was able to turn a 9.7 in the quarter through the traps. 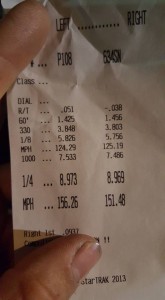 Not bad for a mostly stock LS.

However, that wasn’t fast enough for him. It’s highly likely that nothing ever will be. In his quest for speed and the optimal balance on the 944, Craig pulled the 76 mm turbo out and installed one of his own 78 mm turbos. He then took it to the track and proceeded to shave another tenth of a second off his previous best, running a 9.6 through the traps on the quarter mile.

Step 4: Ended in a Blowout

Although 9.6 seconds in the quarter mile is really damn fast for a street legal car, it wasn’t enough for Craig. He pulled the top end of the engine apart and stuck the cam from a 6.0 LS from an LS1 Camaro in. That only netted him a gain of four MPH and 40 HP, so ….

Craig pulled the “weak” 6.0 camshaft out and went with a custom one of his own: A JS Racing Spec 2 cam. Once that was dialed in, off to the track he went. At the drop of the green, he hammered it, and dropped the transmission. That was embarrassing, having to tow the 944 back to the shop.

Time to Install a Bullet-Proof Transmission

Out came the mess that was once a TH400 and in went a custom race-built 200R4 with another PTC 3500 stall converter. To ensure that the transmission could handle the output of the engine, Craig had it built with billet internals by CK Performance again. 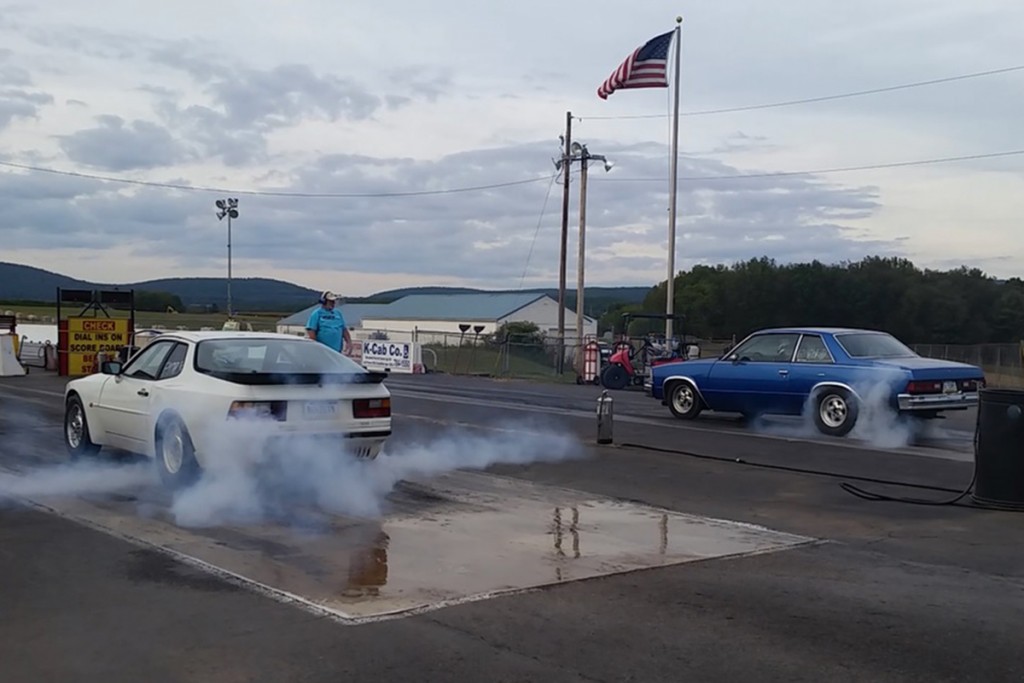 Craig and his rival perform burnouts to heat the tires.

In that configuration: Stock bottom end with a custom camshaft and the 200R4 with the 3500 converter, it was time to go back to the track. First, he stopped off and put t up on a dyno, just for gits and shiggles. The dyno told him he was going somewhere: 730 horses running around under the hood of the around 2,500 pound car. His best pass in this configuration was an extremely respectable 9.49 seconds. However, that horsepower figure of over 730 started becoming problematic.

Shortly after that 9.49 second pass with 730 ponies galloping around, Craig started hearing a problem. He had a tapping, knocking sound coming from under the hood. His experience told him right away what it was: “I’ve got a Gen3 LS engine.” When he tore it down, he discovered that he was absolutely correct, he’d bent a rod and it was causing the piston skirt to dance on the cylinder bore. Time to tear it down and basically start afresh. 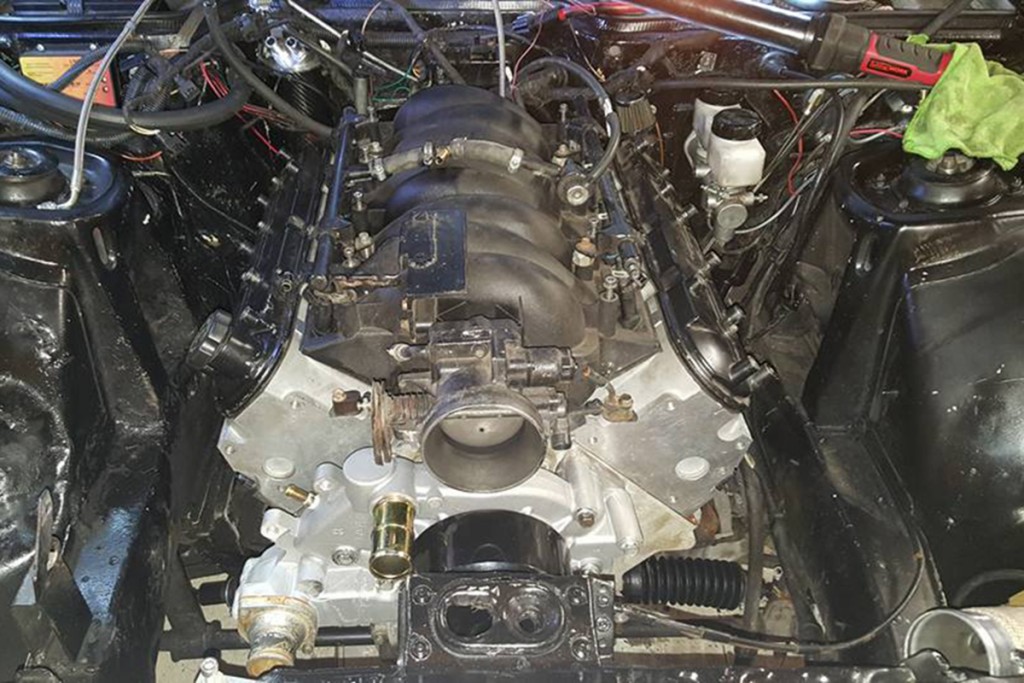 Craig liked the power and feel of the 5.3 in the 944, but he wanted it to be stronger, he went with a boneyard Gen4 aluminum block 5.3-because the rods in Gen4 blocks can handle quite a bit more power (and because it shaves around 150 pounds off the finished product). He installed a set of unported 243 heads with BTR springs, LS7 lifters, and a mild Lil John Motorsports cam (duration of 220-ish and a split .580/.600-ish lift-exact specs are his secret.)

Craig’s motto is “I like to go fast….for cheap.” This means that instead of splurging on expensive parts, he makes do with what he can get for lower prices. Such as standard head gaskets and Chinese Pro-FormX head studs. One of his pricier acquisitions was the Z06 intake he’s now using.

With the new engine installed with his 76 mm turbo installed, Craig discovered that every time he bumped the boost up over 20 PSI, the fuel system went too lean. This required him to pull the Porsche stock Bosch 044 fuel pump and install a Holley 1200, but that also allowed the mix to go lean at higher boost pressures. Now it’s got a Holley Billet 1600 pump and supports up to 25 PSI of boost quite easily. He also determined that the stock Porsche lines (3/8 inch feed and 5/16 inch return) had to go. Not enough fuel volume being delivered.

The rest of the fuel system now consists of: 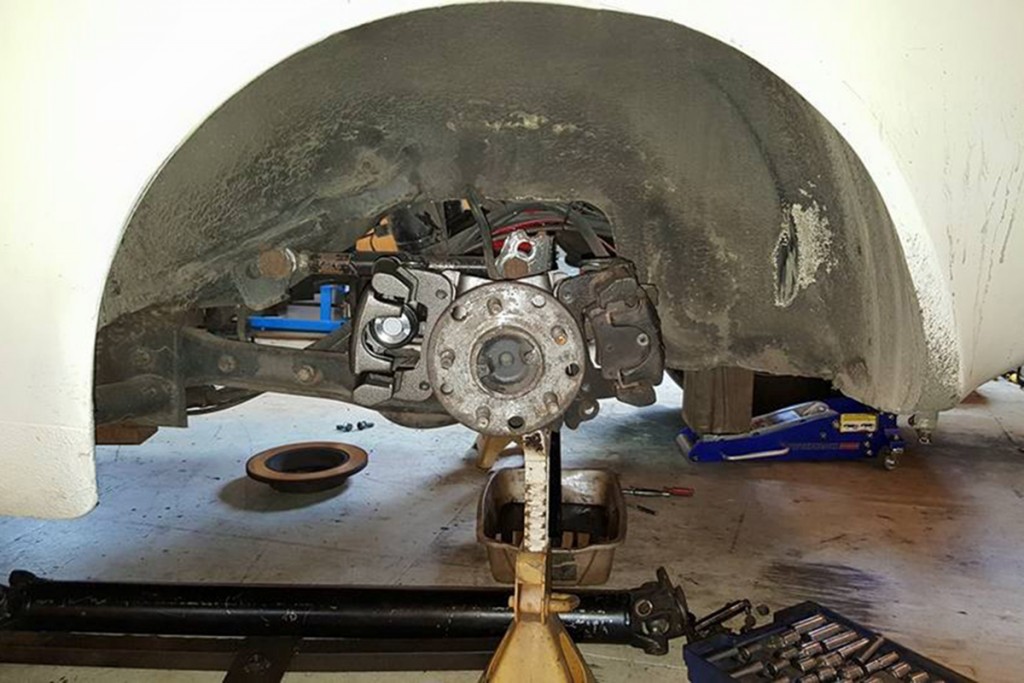 Two calipers from 1995 Mustangs per side on the rear.

Every car has to have a functioning brake system, especially ones that hit the low 9.4 second range in the quarter mile. For staging, he’s using a bump box of his own design. Under the hood he’s got a Wilwood manual master cylinder. That’s being aided by a Walker remote dual diaphragm brake booster mounted in the trunk.

Up front he’s running the stock Porsche calipers. Out back he had to do something very different. He burned out the stock calipers, so he put together a custom bracket and is using two pairs of stock 95 Mustang calipers, with the second pair being plumbed to the primary brake circuit. This lets him launch like a crazy bat when the green drops. 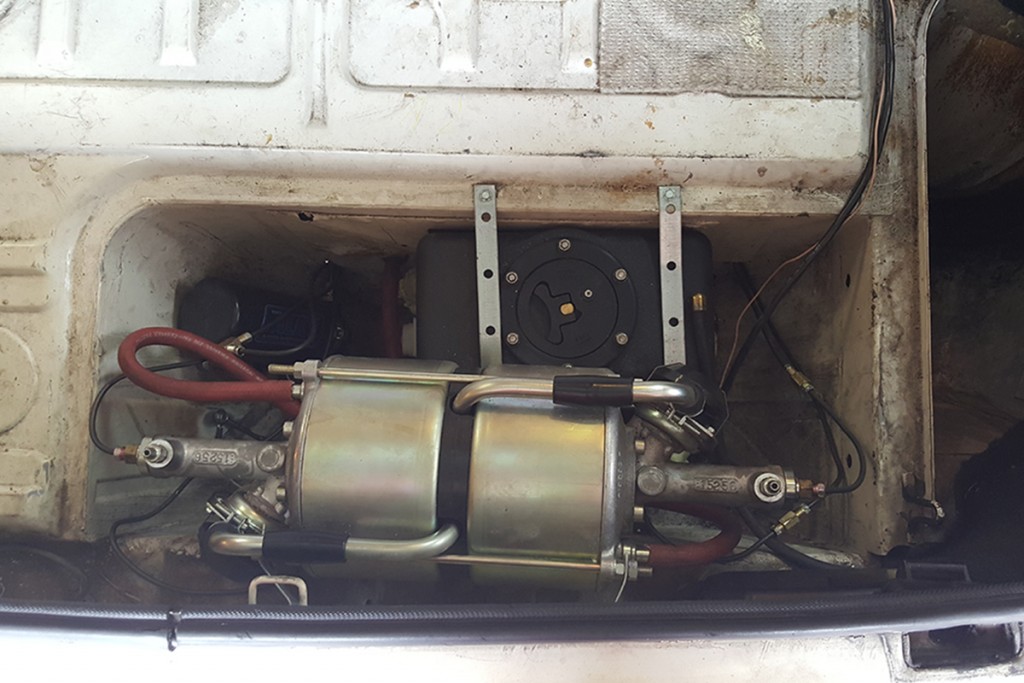 The Walker remote power boost Craig installed in the trunk.

Other Stuff Craig Made Custom

Cooling is a big issue in Craig’s Porsche, both the intake air and the transmission. He fabricated a customer air-water cooler for the tranny cooler and stuck into a lunch box under the passenger seat. He also stuck a fan-cooled cooler under the rear bumper and equipped it with a 180 degree thermostat.

The Porsche suspension was never meant to support the weight of a big V8 and its transmission, so Craig had quite a bit of modifying to do. Up front he’s running the factory struts with KYB gas cartridges. Out back it’s running a set of customized coil-overs he got off e-bay. 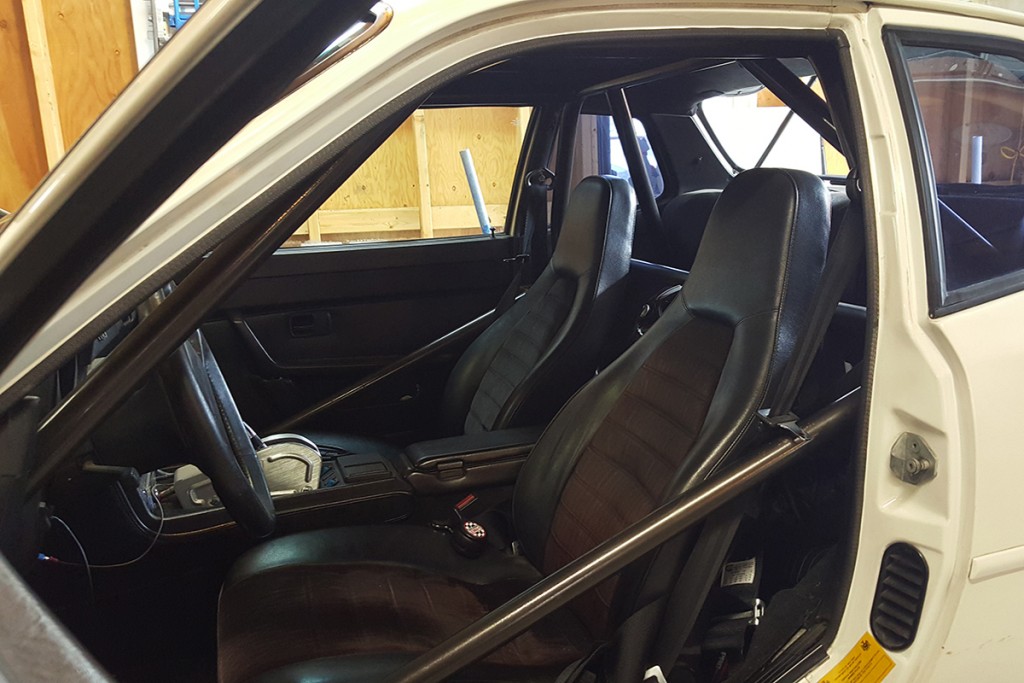 The car has a full rollcage for safety.

The lower control arms are from BMR while he custom-made a set of Heim-link uppers. To help support the extra weight, he also installed a set of 79 VW Bus air shocks. Instead of the stock coils, he sliced a set of 95 Honda Civic coils in half and installed them.

Craig’s top pass was 8.9 seconds, but he’s done a few things to it since then but the track’s been closed, so he wasn’t able to give an update on the improvements. He’s promised to update us in the comments, so check back in about a week. For more information about this and his other builds or to hit him up for advice, check out his Youtube channel labeled “Just Insane.”