General Motors is now one step closer to registering the character marks Enspire and Envision as trademarks with the United States Patent and Trademark Office (USPTO), GM Authority has learned.

The automaker initially filed to register both trademarks with the USPTO on July 8th, 2015. Then, on October 20th, 2015, the office published the filings for opposition. 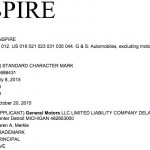 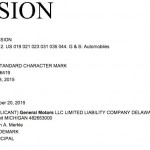 The General appears to be pursuing the Envision and Enspire trademark applications with great vigor, as this latest development demonstrates. The question is, then, what will GM use the marks for?

The Envision mark is fairly simple to us, as Buick has been selling a new compact crossover by that name in China. The Buick Envision rides on GM’s new D2XX platform and will make its way to North America in the second half of 2016. As such, it’s highly likely that GM is registering the mark with the USPTO to use the Envision name in the United States. The Enspire mark, meanwhile, is not as easy to predict. However, the name definitely fits in with Buick’s crossover nomenclature, all of which start on an E” — such as Encore, Envision, Enclave.

As such, we believe that GM plans to use the Enspire name for yet another Buick crossover, one that slots between the compact Envision and full-size Enclave and is mid-size in dimensions. In fact, the Buick Enspire could be variant of the upcoming 2017 Cadillac XT5 crossover.