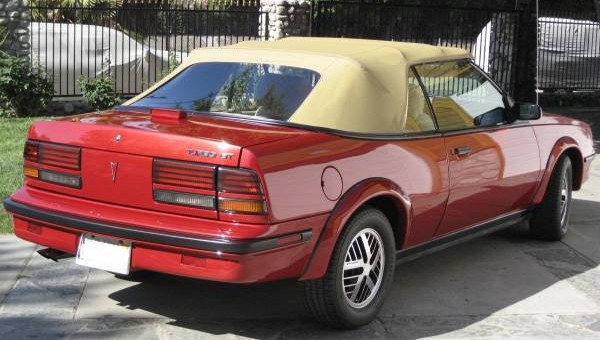 If you had ten thousand dollars, would you spend it on a 27 year-old obscure-looking Pontiac Sunbird? Probably not, and neither would we, but the seller claims that this Sunbird has, “surprising power and reliability.” So let’s examine this specimen, shall we?

For starters, it’s a 1988 Pontiac Sunbird Turbo GT Convertible (read: “oooh a turbo”). The seller claims the vehicle has been fully restored, and that they had built it for their own son – who apparently put only 1,500 miles on it since then. We don’t blame him, we wouldn’t want to be caught in it either.

While the Sunbird will never win any design awards, ever, we can appreciate the work put in over the alleged 15 year restoration period. Plus, the turbocharged nature of this oddity does make this Pontiac pretty rare. You probably didn’t even know Sunbirds came with a turbocharger engine until now. We certainly didn’t.

Of course we want to drive it, we’re curious to see what this 2.0-liter turbocharged four-cylinder built by the late Dandy Dick Landy is made of. Note – Dandy passed away back in 2007, so we’ve taken some of the info with a grain of salt, for instance, “it’s literally fresh off the restoration” … with an (at least) 8-year-old engine. Though we doubt it’s as fun as the four-banger in this Cobalt SS.

If you’re into cars from the 1980’s, then this car would be a great investment. We would’ve been much more into a first-generation Sunbird, which is a pretty good looking car, but we digress. What are your thoughts? Are we being too harsh on the seller and this retro Pontiac? Take a look at the listing for yourself, and speak to us in the comment section below.