Holley fuel systems have been my predominant choice for almost 35 years, unless my customer has specified the use of something else. There are many reasons why I’ve chosen mostly Holley products over the years, but price, ease of installation, and quality top this list. The new Holley Terminator EFI for General Motors LS engine systems have become my “go-to” EFI system for carb-to-EFI conversions, as well as my upgrades of factory EFI systems.

While not the lowest priced stuff available, they’re still affordable and, being Holley, it’s my opinion that their quality can’t be beat for the money. I’ve also found that, as over the years, their tech support is excellent when you run into a problem. Holley’s Terminator EFI comes in two basic flavors, a Throttle Body Injection (TBI) system and a Multi-Port Fuel Injection (MPFI) system. One thing I have to mention before I dive into these kits: Quite a few of them are for off-road and racing use, or for cars built before 1967 only. In other words, in legalese, they’re only supposed to be used in Uncontrolled (Non-Emissions Controlled) Vehicles or Racing Vehicles. If you get caught using one in your street car/daily driver, don’t say I didn’t warn you.

A Quick Word about the Different Types of EFI Systems

For those that don’t know, TBI fuel systems look very much like a carburetor. There is a single injector that sprays fuel down the throat of the throttle body. Under normal acceleration and normal driving conditions, only two Venturis (when fluid flowing through a pipe is forced through a narrow section, resulting in a decrease in pressure and an increase in velocity) are used and receive the fuel spray. If the accelerator pedal (gas pedal for us old farts) is pressed enough, the second set of Venturis opens up and fuel is also delivered to them, allowing for greater acceleration.

There are a few different types of multi-port fuel injection systems that are in automotive use these days. However, the type used most often has the injectors mounted into the air intake manifold, usually right before the intake valve. Just before the intake valve begins to open, the computer commands the injector to spray a burst of fuel which is then sucked into the combustion chamber. Direct injection, which is mainly only available on very high-end performance vehicles, places the injector in the cylinder head so it can inject the fuel directly into the combustion chamber. 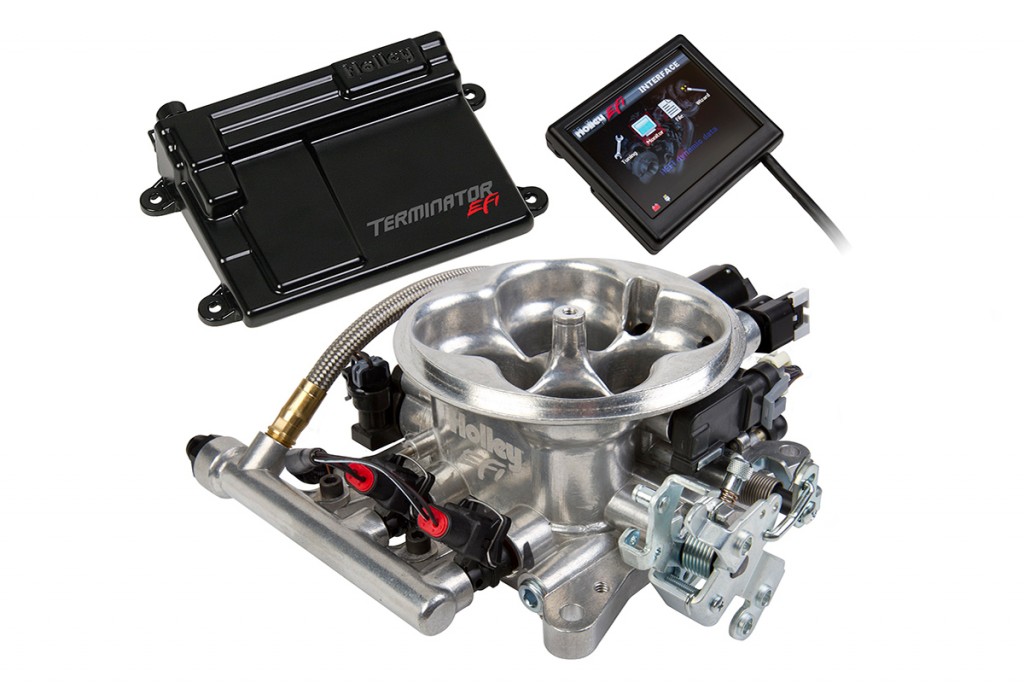 The “Meat and Potatoes” of Holley’s TBI Kits.

Holley offers two different types of Terminator LS TBI EFI Systems for hot rodders. The difference between the two is that one type of kit comes with a transmission control module and software to allow you to get better performance from your 4L60/4L80E transmission fitted behind your LS1/LS6 engine. These come with the TBI unit either brightly polished aluminum, or what they call “Hardcore Grey” which is actually a matte black. 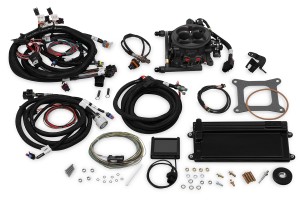 The other type of Terminator TBI EFI from Holley doesn’t come with the transmission control subsystem; you’ve got to either rely on the stock programming or supply your own. These also come with the TBI assembly highly polished or ‘Hardcore Grey.’ Whether you opt for the transmission control or not, all of the Terminator TBI system are pretty much “plug and play”-simply pop the TBI unit on top of the four barrel intake, hook up the wiring to the stock harness (factory LS coil sub-harnesses and the factory sensors), and start tuning, using the 3.5 inch color touchscreen control module that is supplied with the kit. Holley states that not much tuning should be required, since the controller module is pre-tuned at the factory. 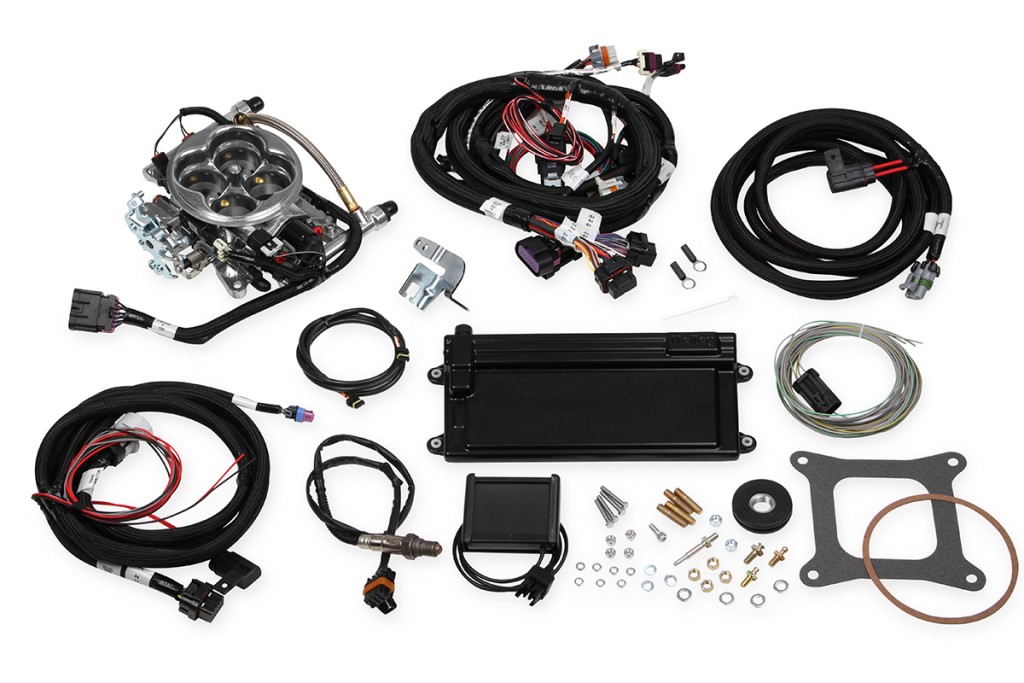 Prices on the TBI systems range from around $2,100 for no transmission control module to almost $3,000 for systems with transmission control. Most of these kits fit 1999 to current 4.8/5.3/6.0 truck engines as well as the LS1/LS6 engines. If ordering one, be sure to know what crank reluctor you’ve got, whether it’s 24X or the 58X reluctor. Also remember, you’ve got to have a four-barrel carburetor intake manifold for the LS, not a standard LS EFI manifold. Holley offers eight different kit options, so be sure to verify what you need, what you’ve got, and what you want. 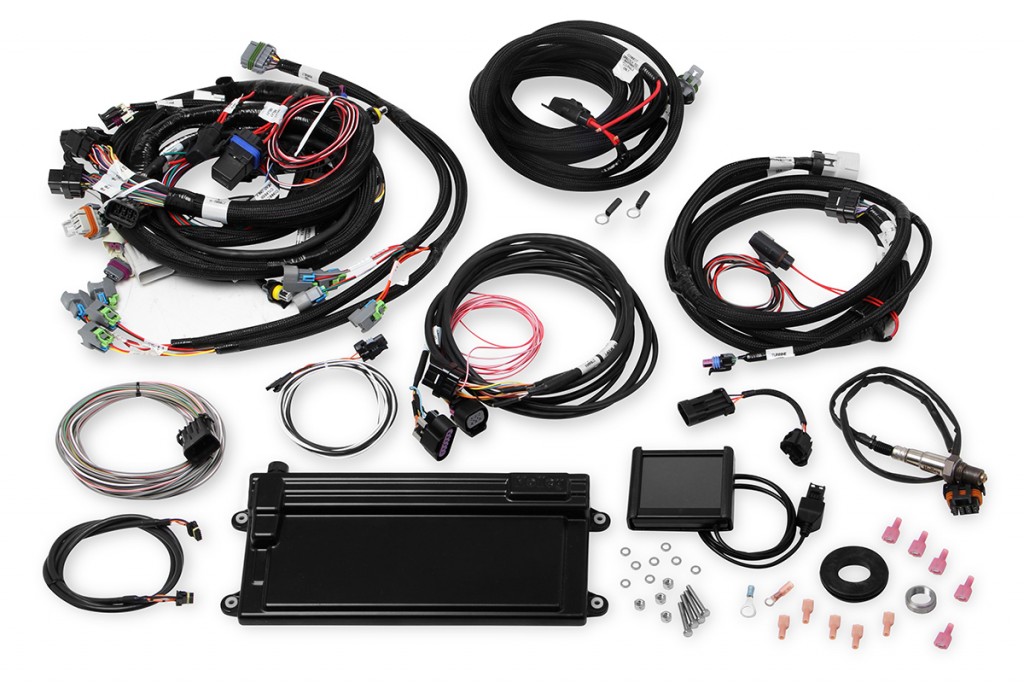 One of the many Holley Terminator LS MPFI kits that are available.

For those that want to stick with the full-on MPFI EFI experience, Holley’s got ten different Terminator MPFI systems for LS and certain truck engines, each of which offers a little something different. For instance, Holley part number 550-614 is for 1997-2007 4.8/5.3/6.0 truck engines as well as LS engines with the standard MPFI fuel injection intake manifold. It comes with the 24X crank reluctor and controls both fuel and spark, but not the transmission. It also has a 3.5 inch color touchscreen for tuning on the fly. This one is priced at the low end of the spectrum at just a hair under $1,800. Holley says it’s a three step process to get you on the road with this kit: Install (which is definitely more than one step), answer a few basic questions on the touchscreen, and drive. 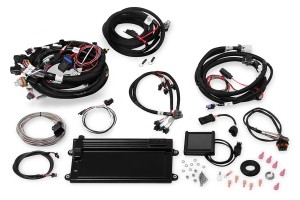 Each of these kits shown have something different, although they don’t look like it. Some have transmission control, while others add drive-by-wire control, and others just control spark and fuel.

Terminator LS MPFI kit. This kit is for LS2/LS3 engines as well as 2007 to current 4.8/5.3/6.0 truck engines with a 58X reluctor, drive-by-wire system, and 4L60/4L80E transmissions and controls all of them with the control module. The wiring harnesses supplied hook up directly to the “stock” harnesses for the ECM, transmission, and drive-by-wire system, except this kit requires you to swap out the stock oxygen (O2) sensor with the included Bosch wideband sensor that comes with the kit.

Again, this kit is also pretty much “plug and play” according to Holley, with there being some questions about your driving habits and where you live put to you on the included 3.5 inch touchscreen display. Also, this kit is meant for cars that won’t be driven on the roads or for older, uncontrolled cars. 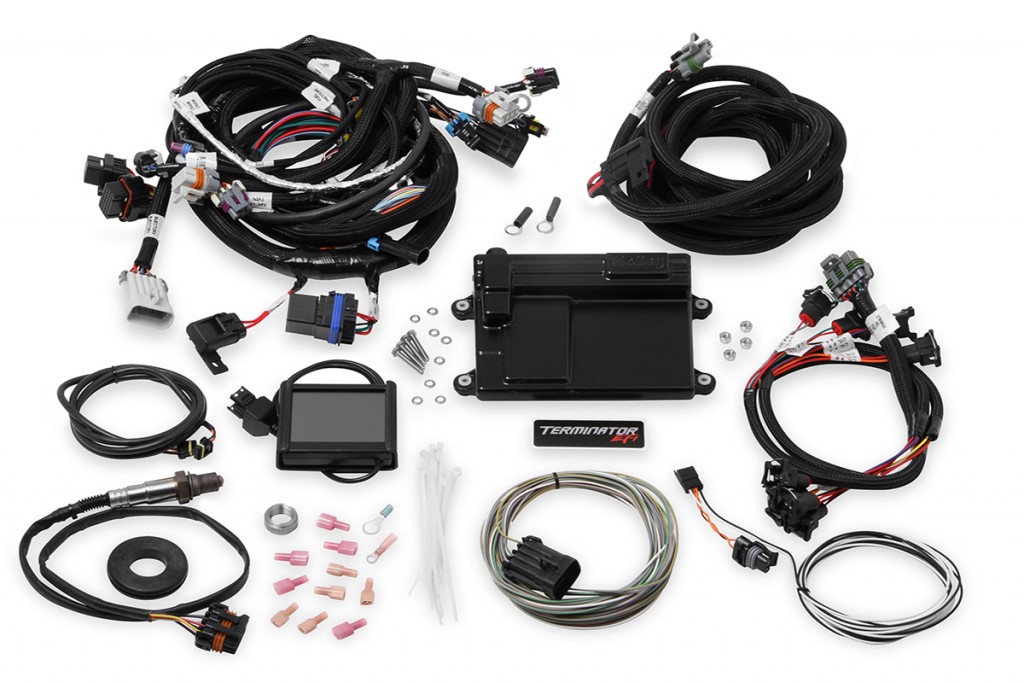 Holley makes these kits so that pretty much anyone with a few minor tools can successfully install them in an afternoon or less.

The “mid-range” kits don’t include the drive-by-wire control portion of the control module and software. You’ll need to know exactly what you’ve got when ordering a Terminator MPFI LS EFI kit-1997-2007 or 2007 to current truck engine or which flavor of LS engine you’ve got. You’ll also need to know if you’ve got the type of transmission that some of the kits are designed to control, as well as whether you’ve got the 24X reluctor or the 58X reluctor.

What These Kits DON’T Come with Adds to Their Cost 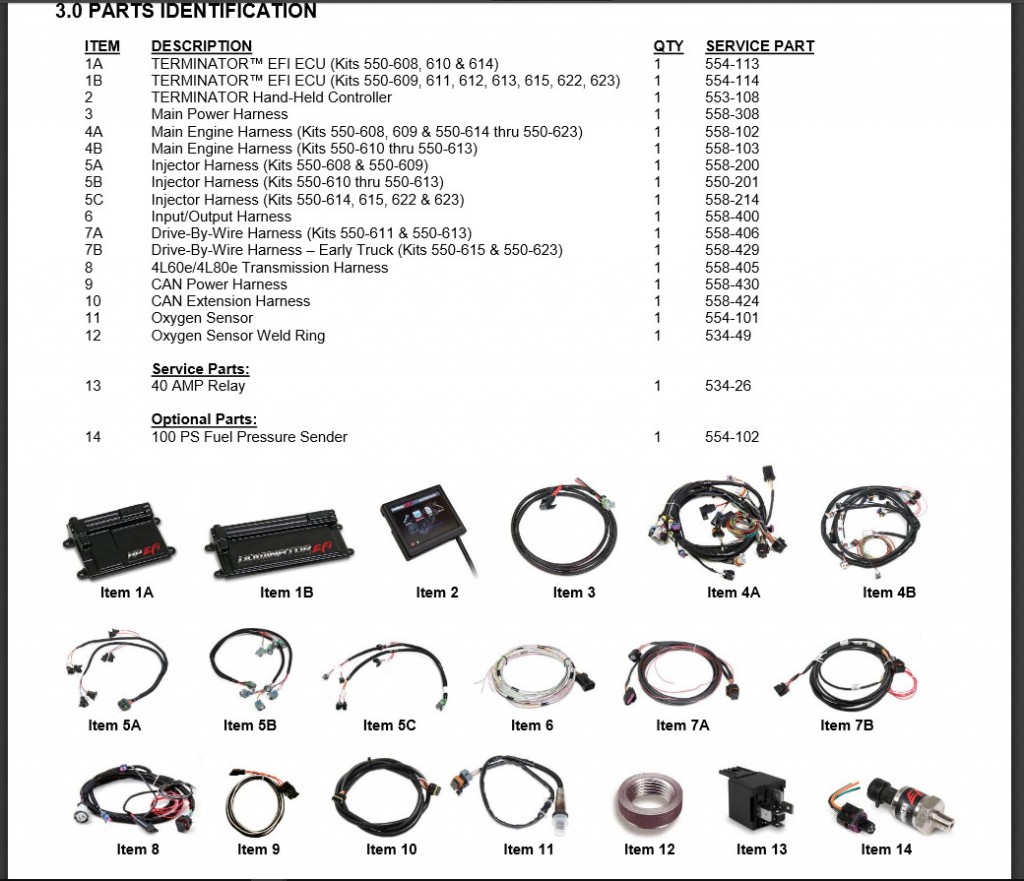 From what I’m seeing, none of the Terminator LS MPFI kits come with injectors or fuel rails. They also don’t come with fuel pressure regulators. Holley also recommends, but doesn’t require, a 0-100 PSI pressure gauge with some of these kits. Due to the increased fuel demand, you’ll also need a high pressure, high volume fuel pump, preferably electric, also not included, but available through Holley.

Also, because most classic cars didn’t come with fuel injection, you’re also going to need a modified inspection cover/fuel gauge/fuel lines for your gas tank for the return lines. This is because, unlike a carbureted system, excess fuel pressure is bled back to the fuel tank by the pressure regulator. 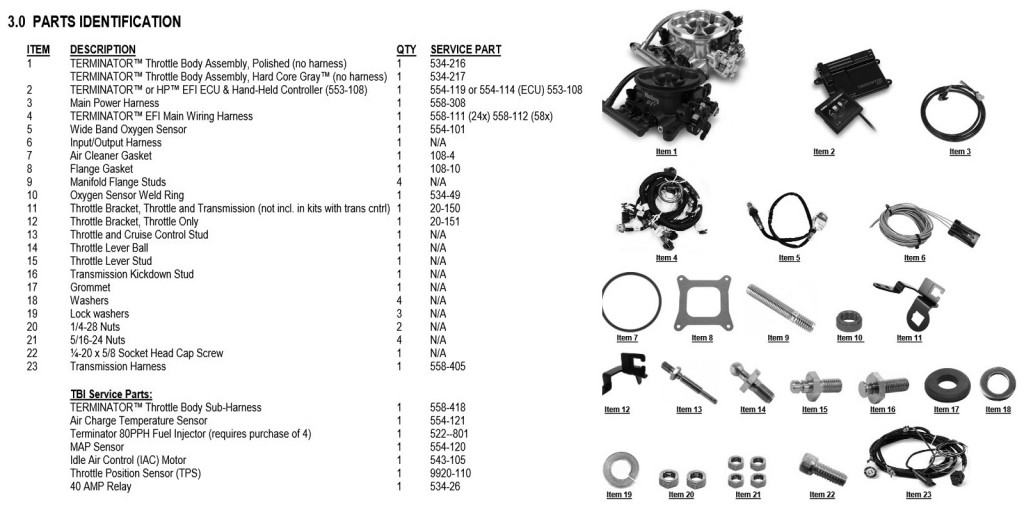 Again, no pressure regulator or pump listed on the parts list. Be sure to budget for those.

It should also be noted that unless your exhaust system is from a fuel injected vehicle, you’ll need to weld the O2 sensor mounting ring into the exhaust after y-pipe. If you’re running true dual exhaust the way I do, you’re going to need to pick up and extra Bosch wideband O2 sensor and also another O2 sensor mount and weld them both into the headers. If you know what you’re doing, this isn’t very difficult, but because exhaust pipes are round and not square, it can be tricky for those that don’t have a bit of welding experience.

The kits themselves are fairly straightforward to install and most hot rodders should be able to install any of Holley’s Terminator LS EFI kits in about an afternoon. If you’re planning on upgrading to higher volume injectors, you should contact Holley for advice on tuning, because these MPFI kits are designed to use standard/stock injectors.