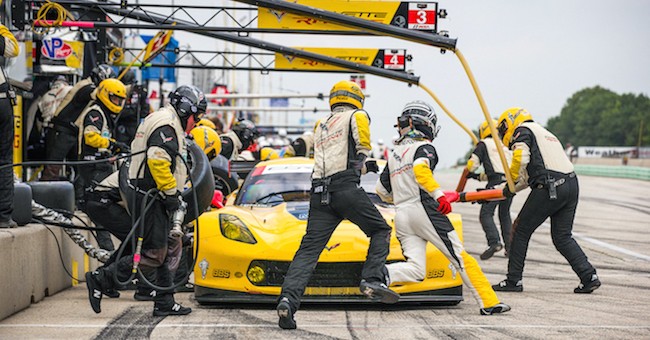 Jan Magnussen writes frequent columns for Motorsport.com, and this week used the space to address the unfair Balance of Performance rules being handed down to the Corvette Racing team as the 2015 TUDOR United Sportscar Championship season begins to come to a close.

You may have noticed Corvette Racing’s No. 3 and No. 4 C7.Rs finished uncharacteristically far back in the running order at the recent Oak Tree Grand Prix at VIR. This is because series rule makers have slapped the car with Balance of Performance adjustments designed to give Corvette Racing more of a challenge, putting them at a significant disadvantage to the Porsches and Ferraris.

As a result of these BoP adjustments, the Corvette C7.R is currently the heaviest car on the GTLM grid with the smallest fuel tank. Magnussen says they are a victim of their own success, with IMSA likely sticking them with the BoP adjustments after their wins at Daytona and Sebring earlier in the year.

“It’s frustrating as hell,” Magnussen writes. “But that’s what we got, and it will be what we have at COTA and Petit Le Mans. We’ll just have to make the most of it and make sure that we’ve done all that we can.”

Corvette Racing isn’t overfly confident it can pull out a good result at either of the last two races of the 2015 TUDOR season, but it stands a better chance at winning Petit Le Mans considering the team shines in endurance events. No matter how much of a disadvantage they are at, you can still bet on Tommy Milner, Antonio Garcia, Oliver Gavin and Magnussen to try their hardest to get the yellow Corvettes out front.

We’ll find out if Corvette Racing can overcome IMSA’s frankly unfair BoP adjustments later this month when the team takes to the track for Lone Star Le Mans at Circuit of the Americas. The race will be aired live on FOX Sports 2 on Saturday, September 19th, and will be shown again the following day on FOX Sports 1.