A chrome-wrapped Corvette Stingray has been badly damaged after it crashed in Marina Del Ray, California.

Though the car is likely totaled, the incident could’ve been a whole lot worse– its impact was “cushioned” by a Shell gas station. And by the pictures provided it appears to have just missed the clipping the pump. Yikes. 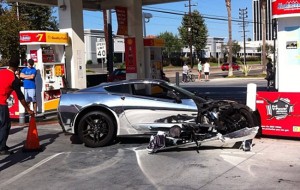 Yeah, that’s not going to buff out anytime soon.

GTSpirit says the young driver (age not specified) hit a number of vehicles before coming to rest its shiny body on one of the small, protective posts that shield each bump.

Unfortunately for the driver, the damage can’t be fixed with a firm and some Meguiar’s wax. Despite first lessening its rate of speed on the sides of other cars, the Corvette sustained serious damage to the front-end, windshield, exterior mirrors, A-pillars, and numerous body panels. Judging by the pictures, the engine also looks like it’s in need of some serious work.

The driver, meanwhile, is reportedly okay. Hopefully he/she knows this seemingly senseless accident could have been a heck of a lot worse. Let this be a reminder that reckless driving on public roads can affect more than just the reckless driver.