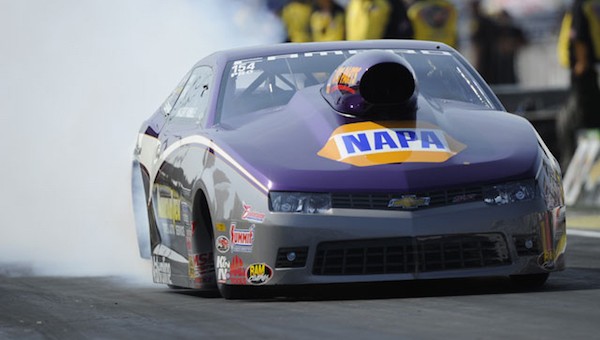 Chevrolet has nine drivers competing in Pro Stock, two in Funny Car and one in Top Fuel. John Force Racing makes up for three of those drivers, with John Force and two-time Carolina Nationals winner Robert Hight competing for the title in their Camaro SS Funny Carsand Brittany Force in title conetnion with her Top Fuel in her Monster Energy/Chevrolet Dragster.

The Pro Stock category features nine Chevrolet cars – the most of any manufacturer in a single category. Among those is Erica Enders, who now leads the category following her Chevrolet Performance U.S. Nationals win two weeks ago. Also racing for the Pro Stock championship will be Chevy drivers Jonathan Gray, Jason Line, Greg Anderson, Shane Gray and more.

“Congratulations to all our Team Chevy drivers who advanced to the Countdown to the Championship in Pro Stock, Funny Car and Top Fuel, aid Chevrolet NHRA program manager Roger Allen. “It’s a remarkable achievement to be among the top drag racers in the world that will compete for NHRA championships in the three categories.”

Click here for a full schedule of events from zMAX Dragway this weekend.